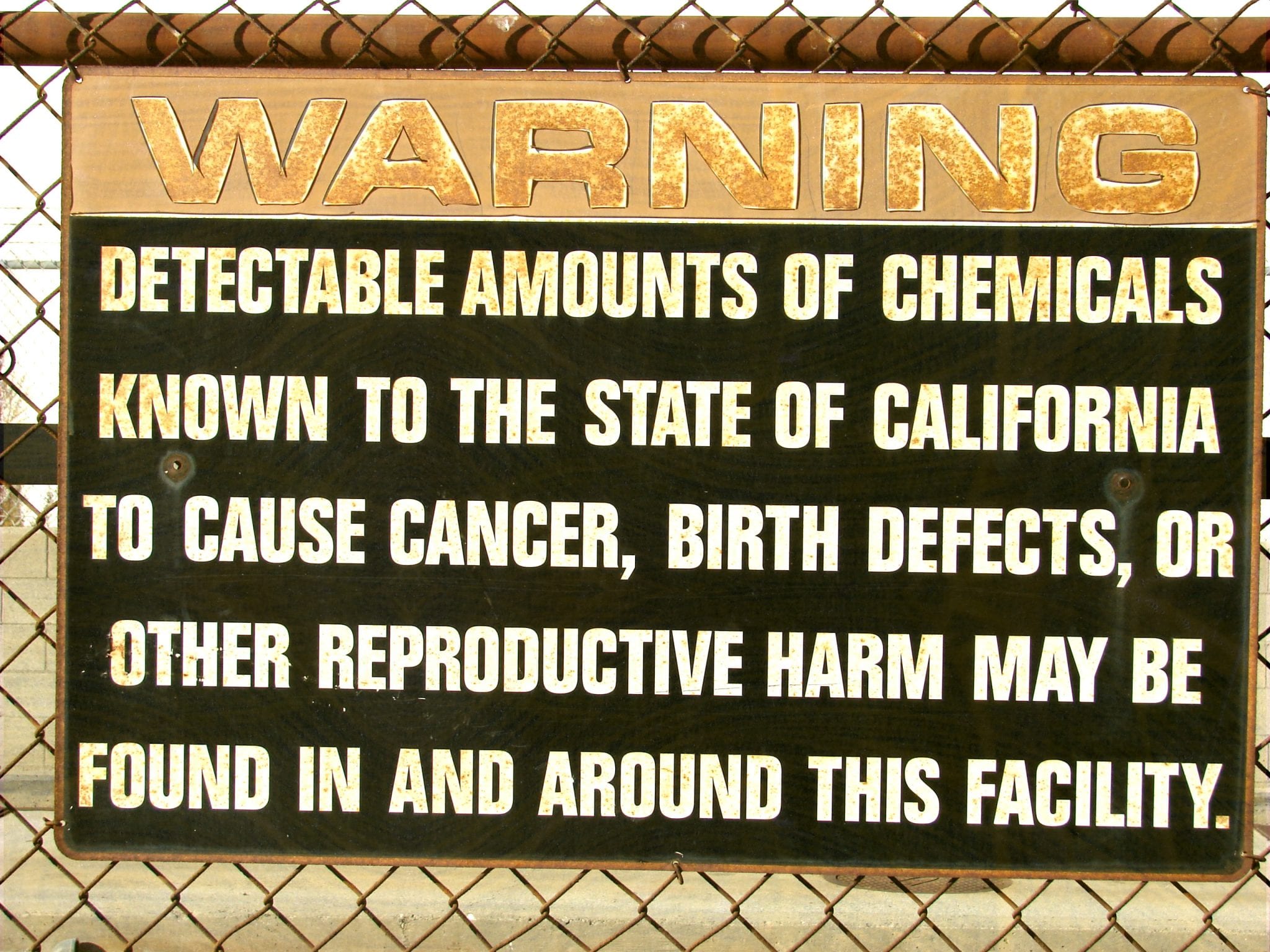 Everyone who has visited the Happiest Place on Earth has been greeted by this not-so-joyful sign: “WARNING: The Disneyland Resort contains chemicals known to the state of California to cause cancer or birth defects or other reproductive harm.” Who would have thought that visiting with Mickey Mouse or riding on Space Mountain could be so scary?

It’s doubtful that anyone has ever been dissuaded from visiting there because of that pointless information, or has known what to do to mitigate any alleged risk during their visit. Any infinitesimal potential danger surely pales in comparison to the risk of navigating the Orange Crush freeway interchange to get to the park. Like most business entities across the state, Disney’s resort no doubt uses paint or other substances that could trigger the notification.

Such warning signs are ubiquitous at retail establishments, office buildings, car-repair shops, and practically anywhere the public frequents. The signs don’t offer specifics, so visitors are left with little more than an ominous feeling. When I first moved to California in 1998 and walked up to the door of my new employer, I saw one of those signs — and yet somehow spent years in the building without incident. It was my first reminder of our state’s virtue-signaling approach to safety.

The signage is required under the terms of Proposition 65, one of those nice-sounding voter initiatives that does little to live up to the terms of its ballot title. Passed overwhelmingly in 1986, the “Safe Drinking Water and Toxic Enforcement Act” declared that “hazardous chemicals pose a serious potential threat to their health and well-being” and provided a right for citizens to be informed about any potentially dangerous chemicals they might encounter.

The signs raise eyebrows among infrequent visitors to our state, but Californians are used to it by now. We chalk it up to yet another one of the state’s regulatory overreaches. But Prop. 65 still grabs occasional attention when the courts or bureaucrats go too far, which is what happened last year. In April 2018, a Los Angeles Superior Court judge ruled that coffee retailers need to place warning labels on coffee cups and in stores because of something known as acrylamide, as I reported for The American Spectator at the time.

Despite its creepy name, acrylamide is a substance that is produced naturally whenever coffee beans are roasted. Some studies apparently have found cancer in animals that have been subjected to high doses of it. The nonprofit Council for Education and Research on Toxics (CERT) filed a lawsuit against coffee companies in 2008 and 10 years later received a favorable ruling. Coffee firms were put in the position of proving that their product is not dangerous.

The initiative empowers the state attorney general and local district attorneys to file suit against companies, but it also includes a “right of action” that enables private attorneys to file suit on behalf of consumers. Companies can be held liable for $2,500 daily fines and these private attorneys can pocket 25 percent of any civil penalties that ultimately are awarded. Coffee sellers such as Starbucks could face such daily fines for every violation going back years, which is even more frightening than the names of these chemicals.

Fortunately, common sense recently prevailed. The California Office of Environmental Health Hazard Assessment (OEHHA) crafted a new regulation that declared, “Exposures to chemicals in coffee … that are created by and inherent in the processes of roasting coffee beans or brewing coffee do not pose a significant risk of cancer.” The agency relied on “the weight of evidence from the very large number of studies in the scientific literature…. ” Not to mention that many studies show that coffee actually can be good for our health.

Coffee drinkers and retailers are safe for now, but the latest fracas highlights the absurdity of the initiative and similar open-ended regulations. As often is the case, the process is the punishment. Coffee retailers have no doubt amassed significant costs fighting the matter for the past decade. Several law firms reportedly have received millions of dollars by suing companies over cancer warnings.

Because most of us are coffee drinkers, this case made headline news, but smaller abuses of the Prop. 65 process happen routinely without public scrutiny. When these attorneys “come after small businesses for technical Prop. 65 violations, the businesses are often left with two bad choices: try to fight the claim in court or reach a settlement agreement, no matter how ridiculous the alleged violation may be,” argued former California Assemblyman Mike Gatto, D-Glendale, in a recent Orange County Register column.

He also complained about “label fatigue,” which is the other important slam against the measure. Prop. 65 has led to businesses plastering imprecise labels everywhere. The American Cancer Society argued that the measure “is intended to help Californians make informed decisions about protecting themselves.” But how? There might be some chemical located somewhere in a huge facility that could, if used excessively or improperly, be dangerous. That is a source of confusion. Our cleaning supply cabinets at home already contain such chemicals.

Gatto proposes that the Legislature take up reforms to protect small businesses from unnecessary litigation. That’s a good idea, but such proposals didn’t go far enough when he was in the Legislature. Here’s a better idea. All environmental-related voter initiatives should come with a warning: “This measure contains toxic language known to the state of California to harm small businesses and our general sanity.” Be careful when considering them.

Steven Greenhut
Follow Their Stories:
View More
Steven Greenhut is a senior fellow and Western region director for the R Street Institute. Write to him at sgreenhut@rstreet.org. His political views are his own.
Most Popular
1
Biden Watch
Joe Biden Versus We the People
by Josh Hammer