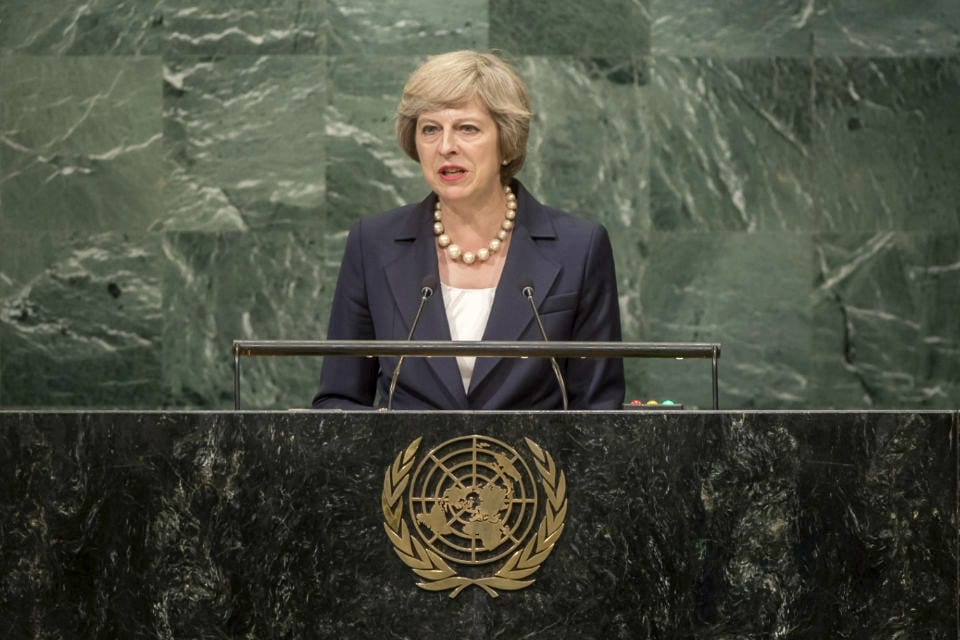 UK Prime Minister Theresa May’s agreement to withdraw from the European Union may not be the worst deal ever, but it’s a close second to former president Obama’s nuclear weapons deal with Iran.

By the terms of her withdrawal agreement May has literally thrown the concept of Brexit out the window. Brexit was supposed to end the EU’s control over the UK’s laws, regulations, trade relations, and the other aspects of power that make a nation sovereign.

May’s agreement accomplishes none of that but still requires the UK to pay the EU a lump-sum alimony of about £39 billion (about $50 billion) to cover its supposed debts to the EU through 2020.

The UK parliament will debate May’s withdrawal deal this week and vote on it around December 11. May is reportedly far short of the votes she needs and the outcome is anything but certain.

The withdrawal deal was not the inevitable product of the 2016 Brexit referendum in which 52 percent of UK voters supported the UK’s exit from the EU. It is a masterful understatement to say that a better deal could have been made.

The Brits’ beef with the EU that brought about the Brexit referendum goes back to the aftermath of World War II.

The UK’s economy was the strongest European economy coming out of that war. London and several other cities had been devastated by German bombing but the rest of Europe was literally starving in the dark. The United States, through Secretary of State George C. Marshall’s plan, saved the Europeans — and the Soviets — from starvation. The Marshall Plan rekindled their economies and — to help propel them after the Plan’s aid ceased — required the European nations to cooperate economically.

The Brits wanted a customs union to prevent tariffs and other barriers to trade but many others — particularly the French — wanted a political union. The Brits refused to join the European Coal and Steel Community in 1950.

From that point, the Europeans, under the leadership of French President Charles de Gaulle, tried several variations of the theme. De Gaulle vetoed UK membership in the European Free Trade Agreement in 1963. It was not until 1973 that the UK joined the EU.

The EU, through the treaties creating it (and since by accretion), has enormous powers inconsistent with the sovereignty of its members. The European Commission enacts laws and regulations across all 28 nation-members. Its courts — the European Court of Justice and the European Court of Human Rights — enforce the Commission’s laws, regulations, and such to ensure they are applied uniformly throughout the EU’s twenty-eight member nations.

Never mind that the United Kingdom has its own Prime Minister, parliament, and courts: the EU can overrule them and subordinates UK law and regulation to its own. Because the UK’s courts have to abide by the laws and jurisprudence of the EU, its laws and regulations have been written to conform with those of the EU.

It’s not for nothing that the UK has been unable to deport dozens of terrorists. EU law — and thus UK law — prevents it.

There are other aspects of the EU’s power that are abhorrent to a sovereign nation, such as its common foreign policy. The EU law requires that all EU citizens can live in any EU nation.

The smartest move the UK made was when it declined to join the “Eurozone” and kept its own currency, the British pound. That decision has been proven time and again by the weaker economies of southern Europe — Greece and Italy — having to be bailed out repeatedly by the richer northern nations, principally Germany.

Some of the nations of northern Europe, particularly Norway and Sweden, were smart enough to stay out of the EU altogether. Norway, for example, has crafted a smart trade relationship with the EU that enables trade without most of the other burdens of EU membership.

After UK voters decided to quit the European Union in 2016, the shell-shocked British Prime Minister, David Cameron, resigned. Negotiating a severance from the EU was obviously going to be extremely hard, so only someone with a political death wish — or a slight grasp on reality — would take the job. Theresa May succeeded Cameron and became the chief javelin catcher on Brexit.

May had voted against Brexit in 2016. After becoming prime minister, she often said that “no deal is better than a bad deal,” and evidently didn’t mean it.

On March 29, 2017, May informed the EU that the UK was leaving the group, triggering a two-year period to negotiate the exit. Her notice had the effect of setting a hard deadline — 29 March 2019 — for the UK’s exit from the EU.

The EU negotiators have sought to make the UK’s exit as painful as possible to prevent other members from doing the same thing. They have succeeded while May’s team have failed to deliver what the voters decided.

May’s agreement with the EU, now approved by the EU, is both costly and inconsistent with the whole Brexit concept.

First and foremost, the UK will remain under the authority of the European Court of Justice for the foreseeable future. (That’s reportedly the opinion of the UK Attorney General.) Remember, please, that the ECJ’s principal jurisdiction is to see that the laws of the EU are applied consistently across the member states. That means the EU Commission will continue to rule the UK indirectly. However long that lasts, the UK will have no representation on the EU Commission or membership on the ECJ.

Taxation without representation, anyone?

As the “Brexiteers” — Brexit’s supporters — point out, that makes the UK a “rule taker, not a rule maker” when it comes to EU law and regulations.

Second, May has agreed to pay the EU the sum of £39 billion, which is far larger an amount than the UK’s liabilities for EU budget and other items such as pensions. (The amount may increase as the UK-EU negotiations drag on under the May agreement.)

Worse still, that payment is going to be made without any agreement governing future trade. How bad is that?

The UK now has an annual trade surplus with the EU of about £100 million (about $128 million). Instead of settling the future of trade between the EU and the UK, May’s deal leaves it to future negotiations. Paying the £39 billion up front removes any leverage the UK had in future negotiations.

At this point, the UK’s is the third-fastest growing economy among the G7 nations. May’s agreement puts that at risk. A UK recession is bound to follow a large diminution of trade with the EU — which diminution, however, probably won’t happen regardless of whether May’s deal passes or a “no deal” Brexit happens. More on in a moment.

Another big defect in May’s deal is that it commits the UK to the EU’s trade agreements— and limitations — for an indefinite time. As President Trump has said, correctly, this action prevents the U.S. from entering into a U.S.-UK trade deal beyond the final Brexit date of 29 March 2019 until — months or years from then — the UK negotiates its trade relationship with the EU.

And then there’s the Northern Ireland issue, which has made a Brexit deal all but impossible.

The UK and EU have wrestled with this problem and have come up with several non-solutions. If the one that’s adopted effectively leaves Northern Ireland as a member of the EU customs union, it would be impossible for the U.S. to negotiate a trade agreement with the UK because one part of the UK — Northern Ireland — would effectively still be part of the EU and prevented from any trade agreements beyond the EU’s.

May’s allies in the UK Parliament and media insist that if Parliament disapproves May’s deal, the alternative of a “no deal Brexit” will be far more damaging to the UK and its economy. That’s nonsense.

A “no deal” Brexit would mean that the UK and EU revert to the trade relationship proscribed by World Trade Organization rules. Both sides, empowered to emplace tariffs and non-tariff barriers, would be eager to not do that and thus maintain the level of trade that exists now. There would be disruptions, in the form of tariffs and non-tariff barriers, but the value of $128 billion in trade with the UK would, from the EU’s standpoint, drastically mitigate the effect.

Simply put, the shopkeeper-nations of Europe, the deadbeats of NATO, who choose to trade with Iran rather than obey U.S. sanctions, aren’t going to give up hundreds of billions of dollars in trade with the UK.

The best hope for the UK would be for Parliament to defeat May’s deal and go with a “no deal” Brexit. That is a real possibility because neither the “Brexiteers” nor the “Remainers” — those who want to stay in the EU — are at all happy with what May has negotiated.

Several of May’s cabinet ministers have quit her cabinet over the deal she negotiated. They say the terms of her deal are proof that her mantra, “No deal is better than a bad deal,” was false. If her deal is defeated in Parliament, the May government will probably collapse and her time as prime minister will end abruptly.

A new prime minister probably wouldn’t be able to negotiate a new deal with the EU by 29 March. But he would be able to take a far stronger stand with the EU — with the backing of the U.S. — and weather the “no deal” storm.

There’s not much we can do to affect the parliamentary debates this week or the vote next week. In truth, we shouldn’t try.

It’s better for us to stand by and — if May’s deal fails to pass parliament — quickly negotiate a U.S.-UK trade agreement with the next prime minister. She’s hopeless.