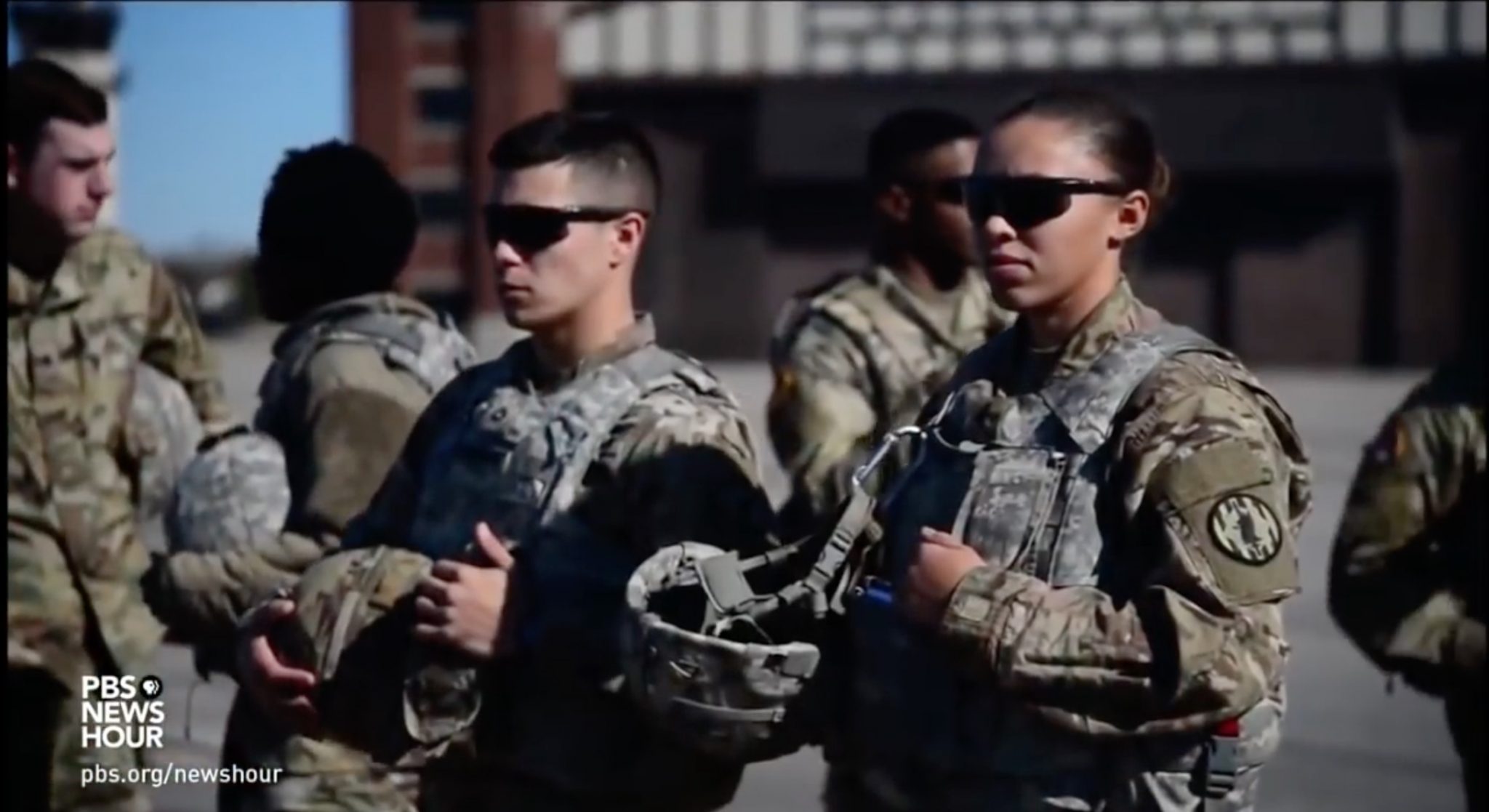 President Trump wants tomorrow’s election to be about the “caravan” of asylum seekers coming to the U.S. through Mexico and the false accusations made against Justice Brett Kavanaugh in his confirmation proceedings. A lot of people are angry about those things.

For the Democrats, this election is all about anger: anger at Trump for beating Clinton two years ago, anger at his attempts to control immigration, and anger at his success in making the economy robust at the expense of some of their pet programs.

Inevitably the election is a referendum on Trump.

Whether the Republicans hold their slim majority in the Senate or their larger one in the House, the Left’s rage will continue to worsen, building on their nearly-incontinent conduct during the Kavanaugh confirmation hearings. They have no ideas so, like Nikita Khrushchev at the UN, they can only use a shoe to pound the table.

It’s highly unlikely (but possible) that the Dems will win the Senate. If they do, no more conservative judges will be confirmed. When the inevitable cabinet shakeup happens, it will be well-nigh impossible to confirm successors to Attorney General Sessions or Defense Secretary Mattis, the two most likely to depart.

If Nancy Pelosi gets to be House Speaker again — or if Chuckie Schumer gets to be Senate Majority Leader — either will be able to control which bills reach the floor to be voted on, sinking President Trump’s agenda without a trace. The border wall won’t be built, the defense buildup after the years of Obama cuts won’t happen, and our intelligence community will be long forgotten.

We should spend some time thinking about some of the things that won’t be decided tomorrow.

First among them is the compound question of how to prevent the “caravan” — i.e. mob — of people marching through Mexico from entering and claiming asylum in the United States, whether Trump can use federal troops to repel the mob and whether he can fix the “birthright citizenship” privilege now being abused by so many.

The original purpose of the 14th Amendment was to ensure the citizenship of former slaves and their progeny. The Supreme Court’s 1857 decision in the Dred Scott case held that black people, even black freemen, couldn’t be citizens. That was settled law until the Civil Rights Act of 1866. But even after that, states enacted laws to ensure against black citizenship. Then came the 14th Amendment.

The Supreme Court’s decision in the 1898 Wong Kim Ark case is being hyped by the left as deciding that anyone born in the United States becomes a citizen without further qualification. That’s just more nonsense. But reading the Wong Kim Ark decision demonstrates with clarity why that isn’t true.

The facts of the case are relatively simple. Wong Kim Ark was born to Chinese parents residing (presumably legally) in the United States. When they left the U.S. to return to China permanently, he visited them twice and married a Chinese woman there. On his second return to the U.S., he was prevented from entering the country on the ground that he wasn’t a citizen.

The court upheld his citizenship after lengthily explaining why.

The court — reviewing the many statements made in Congress when it passed the amendment — held that the 14th Amendment’s proviso that people born here be “subject to” the United States’ jurisdiction specifically excluded certain people. For starters, the children of people in the U.S. conducting diplomatic affairs for other countries wouldn’t become U.S. citizens because their parents were here on the official business of a foreign power.

But one of the points the court made illustrating its decision was that if an enemy nation succeeded in occupying any part of the United States, the children of the invading army’s soldiers would not become U.S. citizens.

The most important point in today’s debate — the citizenship of children of illegal aliens — was never ruled on by the Wong Kim Ark decision or any later Supreme Court decision.

There’s a critical point made by the Wong Kim Ark ruling that no one else seems to have appreciated. It’s the legal and Constitutional conclusion that the soldiers of an invading army would obviously be here against the will of the U.S., inherently without permission. They’d be, in fact, the ultimate illegal aliens. And, the court said, their children would not be American citizens.

An invading armed force occupying a part of our country and illegal aliens coming here peacefully, but in violation of the law, are legally analogous. It wouldn’t be much of a stretch for the Supreme Court to conclude that the children of illegal aliens aren’t U.S. citizens.

Moreover, mothers coming to the United States to have their children born here and returning to their country of domicile — never giving up their citizenship in their country of origin — are citizenship tourists. They, too, should not be able to abuse the process and their children shouldn’t be U.S. citizens. (Russia and Cuba, among other nations, are reportedly selling “citizenship birthright” packages to expectant mothers.)

Section 5 of the 14th Amendment says that Congress may legislate to enforce the Amendment’s provisions. This Congress — and its successor — won’t.

That means that if the president wants to issue an executive order excluding the children of illegal aliens from the protection of the 14th Amendment’s birthright citizenship, he would be invading Congress’s powers and violating the “separation of powers” principle.

That would be the grounds of several lawsuits that would quickly stop the president from applying the terms of his executive order. It would set up a Supreme Court challenge.

And that’s not at all a bad idea. Given the fact that the congressional process is broken — and the fact that the House may be in Democratic hands come January — the best chance to limit birthright citizenship would arise from a carefully crafted executive order and an equally carefully crafted defense of it to and through a Supreme Court decision.

But even that doesn’t guarantee that the Supreme Court wouldn’t simply decide the case on the basis of separation of powers and never reach the birthright citizenship question. Even if it did, the executive order strategy won’t fix the problem of the continuous flow of illegal aliens into the U.S. There are about twenty million already here.

As early as today, Trump may issue an executive order of a different kind, saying (among other things) that anyone who doesn’t enter the U.S. through an established border crossing can’t apply for asylum. Unfortunately, he can’t do that either. Section 208 of the Immigration and Nationality Act says that any alien who is physically present in the United States, whether or not they arrive through a designated port of arrival and regardless of the alien’s status, can apply for asylum.

In his Thursday speech (and since) the president has warned against the mob of Central Americans coming through Mexico to enter the U.S. illegally and claim asylum. In a Washington Times interview, Trump said that U.S. troops would arrest members of the caravan/mob who attack American authorities at the border.

The Posse Comitatus Act prevents the use of federal troops to enforce the law. The only relevant exception is under the Insurrection Act in which troops can be used to restore order if local authorities are incapable of handing a rebellion. The only other case was both unusual and exceptional.

In 1957, Arkansas Gov. Orville Faubus called out the state’s national guard to prevent black children from being enrolled in Little Rock’s Central High School. In response, President Eisenhower nationalized the national guard troops and sent in the 101st Airborne to force desegregation of the school.

That was done in apparent violation of the Posse Comitatus Act, but Eisenhower’s lawyers had invented an exception to it under the post-Civil War “Enforcement Acts” which allowed the use of federal troops to protect black citizens’ voting rights.

No matter how clever Trump’s lawyers think they are, they’re not going to be able to invent another Posse Comitatus exception.

The only answer is to build the border wall. That’s not a complete solution, but it’s the best solution to the problem available. If Nancy or Chuckie take over in January, it just won’t happen.