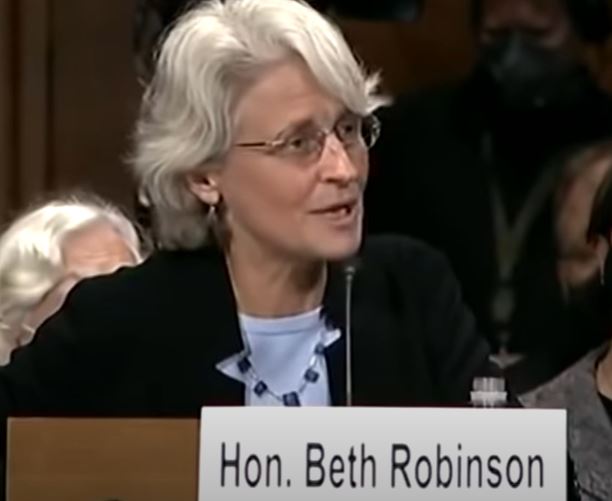 To advance his secularism, Joe Biden is busy appointing opponents of the First Amendment to the courts, as evident in his selection of Beth Robinson to serve on the U.S. Court of Appeals for the 2nd Circuit. As Sen. Ted Cruz noted at Robinson’s Senate hearing earlier this month, Robinson has “a marked hostility towards religious liberty.”

As a lawyer in Vermont, Robinson helped a woman sue Catholic owners of a print shop for not granting her request to make cards for a pro-abortion group. Cruz drew attention to Robinson’s legal brief in the case, in which she described the pro-life views of the Catholic owners of the print shop as “invidious” and “pernicious.”

Cruz asked her: “How might a litigant in the Second Circuit have any confidence that as a judge you would actually follow the law, and in particular, honor the religious liberty protections in the Constitution?”

Robinson argued implausibly that her client, a pro-abortion Catholic, was the real victim of religious discrimination: “In particular, she had asked to print cards for Vermont Catholics for Free Choice. Her contention was that the [printers] said ‘we won’t print these cards because we don’t think Catholics can be for choice.’ She brought a claim for discrimination on the basis of creed.”

An astonished Cruz replied that this argument amounted to asking the court to say: “‘We’re going to force you to say that the Catholic Church is pro-abortion, even if you don’t believe it is.’ Is that right?”

Sen. Josh Hawley also has “profound concerns” about Robinson’s nomination, objecting to her “history of compelling individuals to express pro-abortion viewpoints against their religious convictions.”

Of course, this makes her an ideal potential judge in the eyes of Biden. She embodies the judicial prototype that he favors, reflecting both his identity politics and his activist view of the courts. The White House announced that, if confirmed, she will “be the first openly LGBT woman to serve on any federal circuit court.”

Introducing her at the hearing, Sen. Bernie Sanders said, “Justice Robinson is undeniably one of the most notable champions of equal rights and equal justice, and, in particular, she is one of our nation’s most important pioneers in advancing LGBTQ rights. In the landmark case of Baker v. Vermont, then Attorney Robinson secured a ruling in favor of marriage equality in 2009.”

Biden clearly prizes Robinson more for this LGBT activism than any jurisprudence. Notice that the media, which harped on Trump’s “political” nominees, never complains about the open political activists Biden is nominating to the courts.

Robinson is the antithesis of an apolitical judge. Cruz directed attention to a revealing quote from one of her old speeches, “Long after every state in this country allows same-sex couples to marry, there will still be churches that decline to recognize or celebrate same-sex marriage, and we’re not suggesting it should be otherwise. Well, maybe it should be otherwise.”

Placing secularists on the courts is central to Biden’s assault on religious freedom. He needs secularist judges to secure what he can’t pass through Congress. We can expect him to appoint many more abortion activists and LGBT advocates to the federal courts. This should make the religious shudder. Biden is intent upon forcing them to embrace his woke agenda.

“Protecting one group’s identity may, at times, require that we burden others’ belief liberty,” Chai Feldblum, one of Biden’s advisers, has said. “This is an inherent and irreconcilable reality of our complex society.” In other words, liberalism’s advance requires the diminution of religious freedom. Biden can’t rest until the religious pay for contraceptives and abortions, perform transgender surgeries, and submit to the LGBT revolution.

Judges in the mold of Beth Robinson will turn the First Amendment on its head, interpreting it not as a protection for Christian printers, bakers, and the like, but as a mandate of “nondiscrimination” against them. Unlike the Founding Fathers, who protected religion, Biden sees his role as protecting Americans against it. Biden’s vision of America’s future flows not from the American Revolution, but from the secularist French Revolution. The courts, he has said, must commit themselves to “progress,” by which he means the dissolution of America’s Judeo-Christian roots.