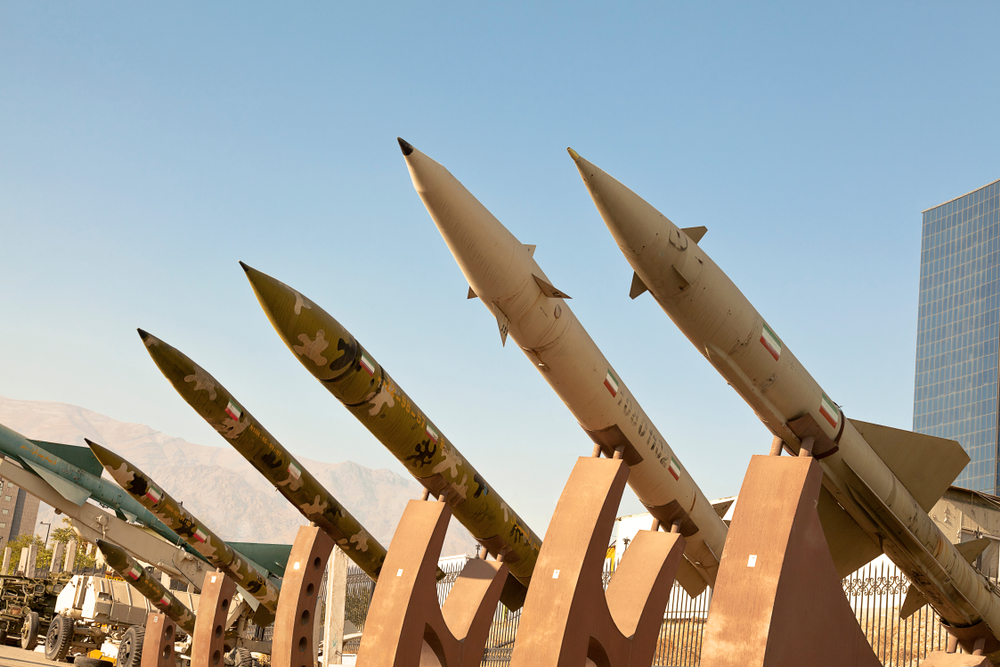 While the U.S. is scheduled to enter indirect talks with Iran on Tuesday in Vienna, the Biden–Harris administration is learning, at least for the fourth time this year, that peace with Iran is elusive. While the U.S. stated that it was open to direct talks when in Vienna, Iran rejected the idea. The U.S. has restated its openness to intermediate steps, but Iran has rejected “step-by-step negotiations.” Previously, after reports that the U.S. would offer partial sanctions relief in exchange for ceasing advanced centrifuge work and stopping enriching uranium up to 20 percent, Iran demanded a lift of all sanctions. And a couple of months ago, Team USA offered to partially unfreeze Iranian assets in exchange for Iran ceasing to enrich uranium up to 20 percent. Instead, Iran demanded a lift of all sanctions.

All this good-faith effort has brought only greater destruction from Iran. Since January, Iran has intensified its attacks against Israel and Saudi Arabia, expelled the remnants of the ancient Jewish community of Yemen, and signed a strategic alliance with China.

Since the start of the Biden–Harris administration, Iran has been stepping up its “grey zone” warfare attacks on Israel. Iran struck an Israeli container ship with a missile in the Gulf of Oman in late March. Iran struck an Israeli-owned cargo ship by what was believed to be a limpet mine in the Gulf of Oman in February. The ship then docked in the UAE, Israel’s new bestie, for repairs. These attacks may be in response to Israel’s attacks on Iranian ships sending illicit weapons and oil to Syria, and/or the assassination of senior Iranian nuclear scientist Mohsen Fakhrizadeh in 2020, for which Iran blames Israel. It was also recently discovered that a Shia terrorist cell sponsored by Iran was responsible for the attack on Israel’s embassy in New Delhi in January. A Syrian-owned ship spilled over 1,000 tons of Iranian oil onto Israel’s shores in February, and Israeli government officials are debating whether this was done negligently or maliciously.

Since the Biden–Harris administration removed the Houthis from the designated Foreign Terrorist Organization (FTO) list, Iran’s proxies have been terrorizing Saudi Arabia. Since January, Iran has attacked Saudi Arabia approximately 80 (!) times via the Houthis in Yemen and militias in Iraq. At least two Houthi attacks were successful in the last month: on March 19, the Houthis hit an oil refinery in Riyadh, and on March 26, they hit an Aramco distribution facility in Jizan. Additionally, in that same time period, Saudi Arabia has intercepted Houthi attacks on at least eight separate days: March 7, March 20, March 25, March 26, March 27, March 28, March 30, and April 1. The Houthi attacks are conducted via drone, missile, explosive-laden boat, or a combination. A recent report submitted to the United Nations Security Council also accused the Houthis as being the perpetrators of the December 2020 attack on Yemen’s Aden airport that killed 20 people.

And how is the Biden–Harris administration responding to this terrorism? Promises to support Saudi Arabia’s defensive capabilities have now proven to be hollow, as the administration is tasking the Pentagon to trim down the U.S. presence in Saudi Arabia, including removing at least three Patriot missile batteries.

In fact, hollow words abound for our traditional Gulf allies. The State Department praised U.S. Special Envoy for Yemen Tim Lenderking and UN Special Envoy for Yemen Martin Griffiths for visiting with Omani, Saudi, and Yemeni officials to achieve a “ceasefire, inclusive political talks, and a durable peace agreement.” While the State Department condemned the successful Houthi attack on March 26, it equivocated by “call[ing] on all parties to commit seriously to and strictly uphold a ceasefire.” Since the Houthis are unrelenting terrorists, so far no luck with that.

The Biden–Harris administration is overly fixated on extracting Saudi concessions on Yemen. In a CNN interview, Secretary of State Antony Blinken’s view of Saudi Arabia’s usefulness is limited to “working to end the war in Yemen, probably the worst humanitarian crisis in the world.” When Secretary Blinken spoke with Saudi Foreign Minister Faisal bin Farhan Al Saud, Blinken focused on peace in Yemen. The State Department also thanked Saudi Arabia for providing Yemen with $422 million in fuel products, which to me looks like we just enabled Houthi extortion.

The Houthis have also celebrated their recent non-recognition as terrorists by terrorizing the remaining Jews out of Yemen. The Houthis, whose slogan is “God is great, Death to America, Death to Israel, God curse the Jews, Victory to Islam,” expelled 13 Jews from Yemen. Now, the ancient, 2,600-year-old Jewish community in Yemen numbers six people. The expulsion was reportedly in exchange for the Houthis releasing Levi Salem Musa Marhabi, detained for six years. With these Jews now in Cairo, the Houthis have yet to hold up their part of the bargain. Marhabi had been detained and tortured for moving an 800-year-old Torah scroll from Yemen to Israel. Despite a Yemeni court proclaiming his innocence, and multiple attempts by former Secretary of State Mike Pompeo to release him, Marhabi remains detained by the Houthis, and a stroke has left him partially paralyzed.

In January, the UAE played an integral role in rescuing some of Yemen’s remaining Jews and reuniting them with their families in Abu Dhabi. The Houthis have been inciting violence against Yemen’s Jews since at least 2002 and persecuting them since at least 2007.

The Biden–Harris administration continues to meddle in Saudi domestic affairs, focusing on human rights and the Jamal Khashoggi case, when it should be leveraging Saudi Arabia to keep Iran in check and to promote greater Arab and Muslim normalization with Israel. In the State Department’s press release announcing the publication of the 2020 Human Rights Report, it is jarring that the State Department mentions ally Saudi Arabia by name along with Belarus, Burma/Myanmar, China, Russia, Syria, and Venezuela.

The State Department also likens Khashoggi to a “dissident, a political opponent or a journalist” or belonging to a group of “journalists, activists, or other perceived dissidents” that the U.S. seeks to protect, despite Khashoggi having a checkered past as a Muslim Brotherhood and Al Qaeda apologist and a talking head for Qatar. The State Department has reiterated the Biden–Harris administration position that it was Crown Prince Mohammad Bin Salman who was responsible for killing Khashoggi, despite the administration having failed to present a convincing case to that effect. Secretary Blinken also justifies the administration’s “recalibration” of the U.S.–Saudi relationship based on human rights, blind to the greater geopolitical issues in the region.

China and Iran signed a 25-year “Comprehensive Strategic Partnership” between the countries in late March. China will invest $400 billion into Iran, while Iran will give China cheap access to oil. While few details are known about the signed partnership, some information has surfaced from a previous draft, and it is quite disturbing. According to Amos Yadlin, the former IDF chief of Military Intelligence, the draft includes a clause regarding military cooperation, specifically in intelligence sharing, as well as joint training, research, and weapons development. The draft also gives China “unprecedented access to Iranian ports and islands,” according to the Diplomat.

The signing of the deal in Iran is part of Chinese Foreign Minister Wang Li’s trip to the Middle East, which includes visiting our Gulf allies Saudi Arabia, the United Arab Emirates, Bahrain, and Oman, in addition to Turkey. What seems likely is that the Biden–Harris administration, because of its icy actions to Saudi Arabia and the UAE, will only continue to drive our Gulf allies toward China.

To downplay the significance of this deal, the State Department said that the U.S. and China had “narrow … tactical alignment” on limiting Iran’s nuclear program and that “we want Iran and China to have a good healthy productive relationship.” In contrast, Former President Trump’s State Department in 2020 had called the Iran–China deal, if signed, “very bad news for the free world.”

Where to Go From Here

To broaden support for any good-faith effort at rapprochement with Iran, the Biden–Harris administration should heed recommendations posed in both the Senate and House bipartisan letters addressed to President Biden in March. The Senate letter, signed by 43 senators, indicates from the outset that 20 percent uranium enrichment is “alarming” and worthy of “confront[ing]” and calls on the broadening of the deal to include arms, ballistic and cruise missiles, support of terrorist organizations and militia, human rights, and U.S. prisoners held in Iran. The Senate letter also mentions that the U.S. should “consult with our European allies, Israel, and Gulf security partners” in negotiating the deal. The House letter, signed by 140 representatives, contains similar language requesting a broader deal to address not only the nuclear program but also ballistic missiles, funding of terrorism, human rights, and American prisoners. The House letter also mentions the importance of consulting with our allies.

The Biden–Harris administration should treat Saudi Arabia and the UAE and others as true allies, rather than as collateral damage in an obsessive, mindless drive to appease Iran. The administration should be leveraging Saudi Arabia, the UAE, and other Gulf allies to further the Abraham Accords and to pressure Iran to implement a durable, comprehensive peace with its neighbors and the world. The administration should also encourage greater U.S. investment in the Gulf to counter a growing influence from the CCP. Rather than drawing down our military assets from Saudi Arabia, we should strengthen them and realign our assets in the Middle East away from Iraq, Afghanistan, Turkey, and Qatar and towards the UAE, Kurdistan, and other friendlies. This way, the Biden–Harris administration would have a much better chance of augmenting peace in the Middle East.