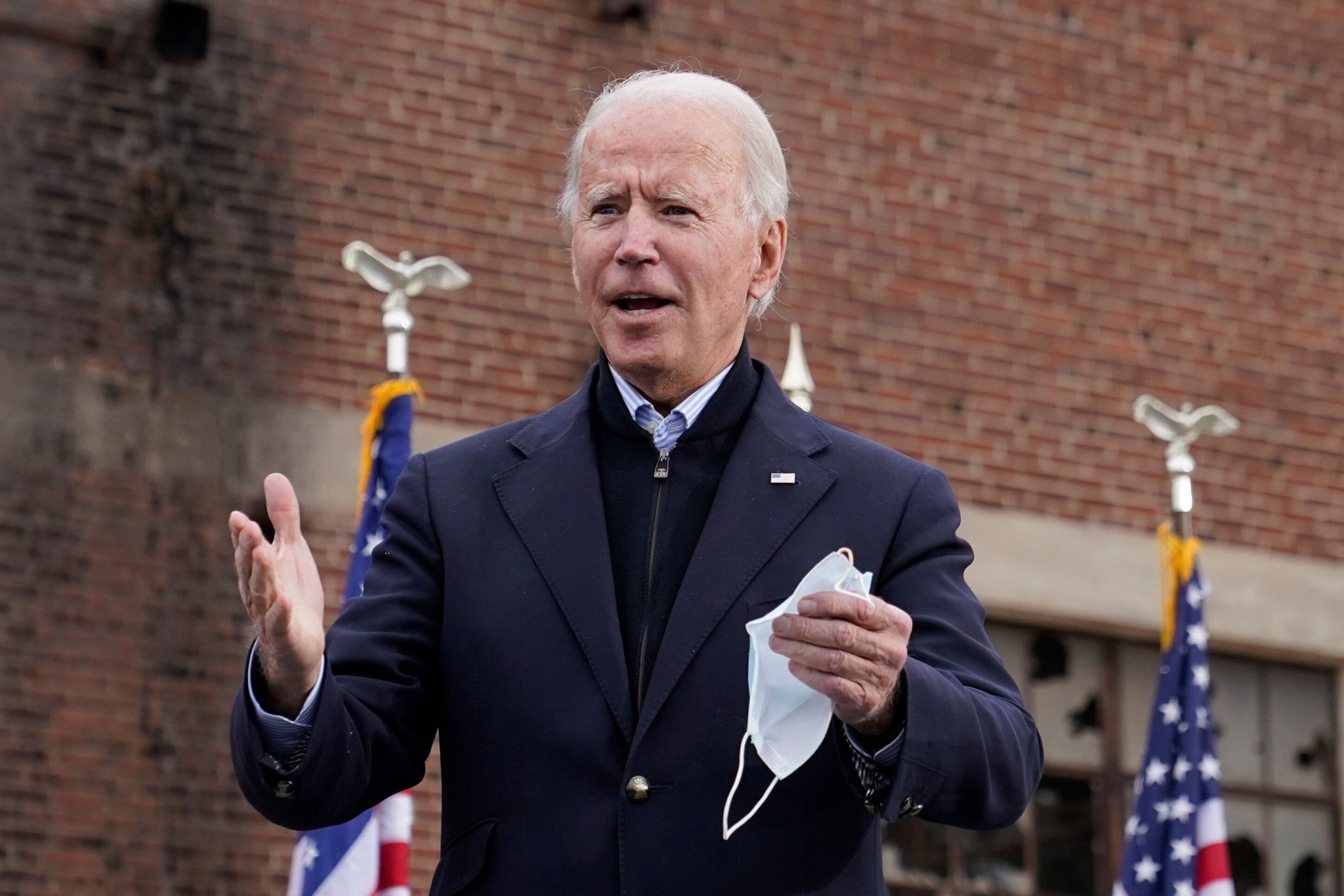 Wednesday will mark the four-year anniversary of the violent Antifa riots in Washington, D.C., when hundreds of anarchists wreaked havoc in our nation’s capital on Inauguration Day, declaring themselves the #Resistance to President Trump. Our media overlords now expect Americans to forget the Left’s deranged reaction to Hillary Clinton’s 2016 defeat, because this does not fit the current narrative, in which anyone who didn’t vote for Joe Biden is viewed as a potential terrorist threat.

Biden will be inaugurated amid a climate of paranoia, surrounded by a phalanx of military security so enormous as to dwarf the number of troops that we currently have stationed in Afghanistan. This unprecedented level of security is necessary, our media overlords tell us, because of the rowdy crowd of Trump supporters who stormed the Capitol two weeks ago. Viewers of CNN and MSNBC have been told repeatedly that what happened on January 6 was an “insurrection,” an attempted “coup,” by dangerous extremists who (a) arrived in Washington with carefully organized plans to destroy Democracy as We Know It and (b) were incited to this seditious attack by what Trump said in his speech at a “Stop the Steal” rally.

There are obvious problems with this narrative. If the riot at the Capitol was planned in advance, how then were the rioters “incited” by what Trump said? Of course, basic competence in deductive reasoning is not a prerequisite for employment at CNN, or Don Lemon and Brian Stelter would be out of work. The network’s anchors are dumb, but their audience is even dumber, so the self-contradicting nature of the “Trump incited a coup” narrative goes largely unnoticed. If what happened at the Capitol was indeed a coup d’état attempt, the conspirators were laughably incompetent. As I said last week, most of the mob inside the Capitol seemed “like a middle-school class who had run amok on a field trip while their teachers weren’t watching” — except for the part where one of them got shot to death by a Capitol Police officer.

Raheem Kassam and others have have repeatedly pointed out that it was literally impossible for Trump’s speech to have incited the mob that breached the Capitol. The protesters who overran police barricades arrived at the Capitol about 12:40 p.m., while Trump was still speaking at the Ellipse near the White House. It is about two miles from the Ellipse to the Capitol, a distance that would take about 45 minutes to walk. Trump’s speech did not end until 1:11 p.m., so no one who stayed for the end of Trump’s speech and walked down Pennsylvania Avenue to the Capitol could have arrived there much earlier than 2 p.m. But by then, the mob of rowdies, who did not even attend Trump’s speech, had already overrun the barricades and smashed their way into the Capitol. This timeline is rather important, given that Trump’s alleged incitement of the mob was the basis of last week’s impeachment vote in the House, with 10 Republican members joining a unanimous Democratic caucus to declare that the president had committed “high crimes and misdemeanors.”

Democrats must always have a right-wing enemy with which to frighten their grassroots constituency.

Much like the “Russian collusion” narrative with which Democrats and their media allies distracted Americans for three years, there seems to be no factual basis for the “incitement” charge against Trump. Alas, we live in a time and place where facts don’t matter, where dimwits like Brian Stelter are considered serious journalists, an age in which paranoia is so rampant that the feeble septuagenarian Joe Biden thinks he needs a vast army to protect him … from whom? That’s the real question, which the media answers with vague claims based on unnamed federal sources, corroborated by “experts” on extremism.

What we are actually confronting is the boomerang effect of political paranoia. Democrats began flinging around this weapon during the Clinton years, when Hillary claimed that her husband’s sexual affair with Monica Lewinsky was actually a plot by a “vast right-wing conspiracy.” The American Spectator played an instrumental role in that saga and was subsequently targeted by the IRS. Just a coincidence, I’m sure. Democratic paranoia further escalated after the 2000 election recount fiasco in Florida, and many Democrats also claimed that George W. Bush somehow defrauded John Kerry in the 2004 election.

Over the years, Democrats used a series of demonized bogeymen to inspire fear and loathing among their grassroots “base.” During the Clinton presidency, the chief bogeymen were the Religious Right and Richard Mellon Scaife. Once Bush was elected, liberals decided chose as their new bogeymen White House adviser Karl Rove and war-mongering “neoconservatives,” the latter term being a liberal code word for Jews. Any researcher concerned about anti-Semitism in America would do well to examine how leftists exploited the “neoconservative” conspiracy theory to demonize Jewish Republicans during the Bush era. What’s remarkable is how swiftly Democrats can switch targets, choosing a new bogeyman to replace the old one almost instantaneously. A few months into the Bush administration, the much-demonized Scaife was utterly forgotten, and the Bible-thumpers of the Religious Right faded into the background, while liberals ranted on cable TV about those treacherous neocons!

Now, 12 years after the end of the Bush era, this seems like ancient history, but the point is that Democrats must always have a right-wing enemy with which to frighten their grassroots constituency. During the Obama years, the enemy was first Sarah Palin — remember when Joe McGinniss moved in next door to her place in Wasilla? — and then it was Andrew Breitbart for a while. By 2010, however, Democrats and their media allies had decided that the Tea Party was the real enemy, which in turn led to the Koch brothers becoming the scary bogeymen. Charles and David Koch had long supported libertarian causes, without provoking any great controversy, until their sponsorship of the Tea Party movement made them a Dangerous Extremist Menace.

In November 2011, I saw first-hand consequences of the Left’s demonization of the Koch brothers, when a mob of “Occupy” protesters stormed a D.C. event hosted by Americans for Prosperity where one of the Koch brothers was in attendance. Another reporter and I found ourselves trapped between the mob and the glass front doors of the building, with one D.C. cop to protect us from hundreds of angry “Occupy” maniacs (see “The Mob Who Came to Dinner,” Nov. 7, 2011). Trust me when I say, no Democrat in Congress had more reason to fear the unruly mob of Trump supporters at the Capitol than we had to fear that screaming scrum of deranged “Occupy” protesters in 2011.

All that Democrats and their allies have done over the years to foster a climate of hatred and paranoia in America has conveniently been forgotten by the media in the two months since the last election. We are not supposed to compare the riot at the Capitol two weeks ago to the riots that wrecked several major U.S. cities last summer. The media worked overtime to convince Americans that George Floyd’s fentanyl overdose was a “murder” by racist police. Anyone who doubted that narrative was labeled a “white supremacist” — facts are now hate, according to our media overlords — and this same label has since been used to smear all Trump supporters as complicit in what CNN viewers are told was a right-wing terrorist attack on the Capitol. More than 100 participants in that riot are now facing federal charges, and at least one Trump supporter has committed suicide after he was “doxed” by left-wing activists trying to get him fired from his job as a bank executive.

What caused the Capitol riot? The belief that Democrats had stolen the presidential election. Without delving into the details of that belief, we can say it’s not a fringe-kook conspiracy theory, because the majority of Republican voters doubt that Biden was fairly elected. If GOP voters don’t believe the media claims of Biden’s legitimacy, whose fault is that? CNN and the rest of the establishment media have long since flushed their credibility down the toilet by promoting the “Russian collusion” conspiracy theory, which was far less plausible than the belief that Democrats cheated in the election. Democrats cheat in elections all the time. It’s routine, standard operating procedure, but we’re not supposed to mention this.

Now, CNN is plotting ways to silence anyone who disagrees with them. This is scarcely a conspiracy theory, since they’re openly discussing their plans to shut down opposition. If the crowd who rioted at the Capitol were paranoid — if they believed a Biden presidency would mean the end of liberty in America — can you blame them? Democrats and their media allies have spent years flinging around the boomerang of political paranoia, and now it has circled back around to whack them upside their thick skulls.

Tens of thousands of troops are deployed to Washington, D.C., this week. Streets are barricaded, and towering walls topped with barbed wire have been erected to defend the Biden inauguration … from whom? The 74 million Americans who voted for Trump? Are all Republicans now demonized enemies of the regime? Are ordinary Americans to blame for this climate of paranoia?

Republican voters are not responsible for the atmosphere of fear and loathing that now grips Washington. It is our decadent elite who have created this mess. While I don’t buy into the theory that our ruling class are actually shape-shifting alien reptiles — I’m not that crazy, yet — they have certainly forfeited public trust, and if we are now doomed to live in an Age of Political Paranoia, whose fault is that?