Loose Canons,Top Story Biden,Brexit,Churchill,Europe,European Union,London Biden, Brexit, or Bust - The American Spectator | USA News and Politics
Menu
Loose Canons
Biden, Brexit, or Bust
Removing Churchill’s bust from the Oval Office shows how much care he has for our “special relationship” with the UK.
by Jed Babbin
European Commission President welcomes Boris Johnson at a meeting in Brussels (Alexandros Michailidis/Shutterstock.com) 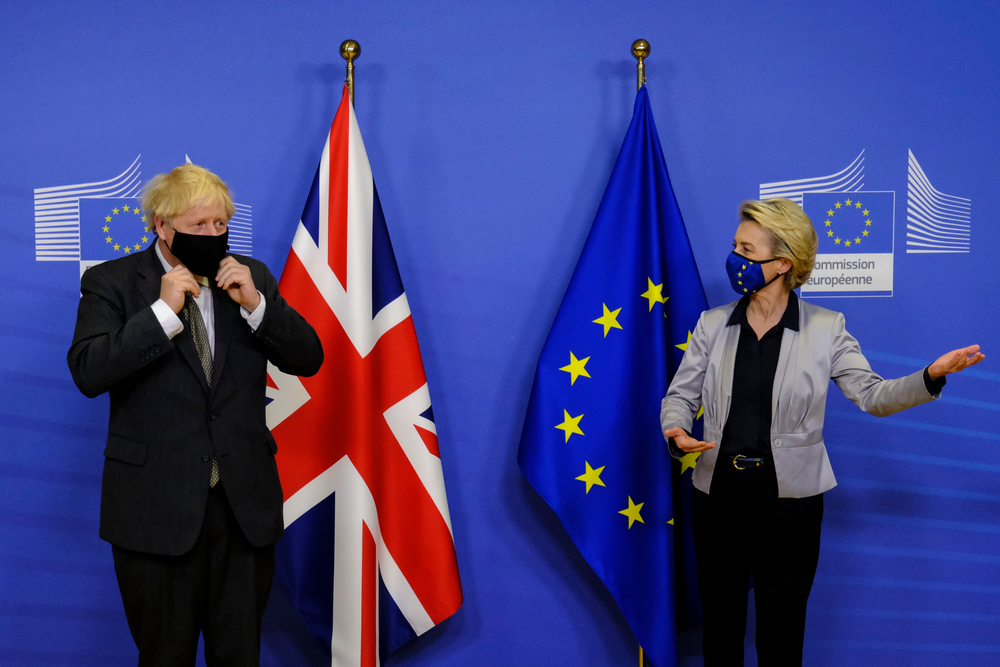 What is it about Sir Winston Churchill that so intimidates Democrat presidents? Perhaps it is the personal courage he showed in 1941 when he stood, almost alone, against the appeasers demanding peace with Hitler, and quite literally saved freedom.

A bust of Churchill, lent to President George W. Bush by the British ambassador after 9/11 as a token of solidarity, graced the Oval Office until Barack Obama evicted it for reasons best known to himself. Donald Trump restored the bust to its proper place, but Joe Biden, in one of his first acts as president, has banished it again.

On Friday, the U.S. Embassy in London published a cheery video in defense of banishing Sir Winston that claimed the “Special Relationship” between the U.S. and the United Kingdom is about people, values & trust,” and arguing that the U.S. and UK are the largest investors in each others’ countries.

The Churchill bust is symbolic of shared values and trust. Biden’s policies toward the UK are not.

One of the expected results of the UK’s divorce from the European Union — Brexit — was the speedy completion of a trade agreement with the United States. Much of the spadework needed to prepare such a deal was completed under the Trump administration. UK Prime Minister Boris Johnson had every reason to believe such an agreement would be accomplished. He was wrong.

Biden’s nominee for Treasury secretary, Janet Yellen, has made it clear that no such agreement with the UK will be done this year and maybe not at all during Biden’s term as president. She said that “President Biden has been clear that he will not sign any new free trade agreements before the U.S. makes major investments in American workers and our infrastructure.”

Such “major investments” apparently include revoking the permits for the Keystone pipeline, which Biden accomplished last week, costing hundreds of American jobs.

Yellen may believe what she said about Biden’s intent, but his reason for rejecting a U.S.–UK trade deal had nothing to do with what she said.

On Saturday, Biden first spoke to Johnson, stressing cooperation on climate change and health, and expressing a desire to strengthen the relationship between the U.S. and the UK. Johnson’s report on the call said they discussed a trade agreement, while Biden’s readout didn’t include that discussion.

Biden, as I have written before, is a multilateralist — someone who believes that nations should not exercise their sovereign powers unless other nations approve. His opposition to Brexit is well known. He has argued that Brexit would damage the Good Friday Accords of 1998, which brought peace between Northern Ireland and the Irish Republic. Last September, Biden tweeted that “Any trade deal between the U.S. and U.K. must be contingent upon respect for the Agreement and preventing the return of a hard border. Period.”

In fact, the Brexit arrangement prevents any damage to the Good Friday Accords, but Biden’s opposition to Brexit is more fundamental. He is a multilateralist. He believes that the UK should have stayed in the EU and not recovered its sovereignty, which Brexit accomplished. He will continue to show his disdain for the Special Relationship by showing a cold shoulder to Johnson.

Biden can be expected to deal more seriously with the German and French governments — the leaders of the EU — rather than with the UK’s Johnson, which is a grave mistake.

The UK is among the few NATO members that invests in its own defense capabilities. Neither Germany nor France does, and Germany — under Chancellor Angela Merkel — was the most vocal against Trump’s pressure to do so. Preferring Germany and France to the UK in the coming years will only reward their contumacious behavior. That could have been offset by quickly reaching a trade agreement with the UK, but Biden won’t do that.

Certainly, the UK needs a trade agreement with us more than we need it with them. The EU continues to pressure the UK with demands that it not vary from the EU’s regulatory and legal restraints. That is all the more reason for us to prove that we share the UK’s values and want to preserve its trust by rapidly completing a trade agreement between the two nations.

We can expect that Biden will be an inconstant ally, judging the UK’s desires and needs — and those of other allies, including Israel — by the demands and desires of others ranging from Germany and France to Russia and China.

The UK is presently arguing with the EU that the EU’s ambassador to the UK should have a lesser rank than the ambassadors of real nations. The UK has it precisely correct, and, though he won’t, Biden should side with the UK in this dispute. The EU pretends to be a nation, but it isn’t. It’s a sometimes loose, sometimes closer conglomerate that functions by unanimity rather than sovereignty.

The EU fears, rightly, that any other nation’s exit from the EU might destroy it entirely. The EU’s continued existence at least partially depends on its being able to prove that Brexit was a mistake that has damaged the UK severely. By refusing a U.S.–UK trade deal this year — and in coming years — Biden will help it prove that point.

The Special Relationship is, as the embassy video said, about people, values, and trust. It was built on our shared history with the UK and its faithfulness in war since 1914. But for that relationship, we would not have NATO, which was the vehicle by which the Soviet Union lost the Cold War. People such as Ronald Reagan and Margaret Thatcher saw to that. New leaders, such as Biden, France’s Macron, and Germany’s Armin Laschet (soon to be Merkel’s successor), are the weakest link in that chain.

Evicting the Churchill bust from the Oval Office was a demonstration that Biden believes we don’t share the values of the UK and do not trust it as much as we did under the Trump administration. Biden’s rejection of a U.S.–UK trade deal is a vastly more important break in the trust that should exist between us. It isn’t likely that the trust between the U.S. and the UK will be restored under Biden.