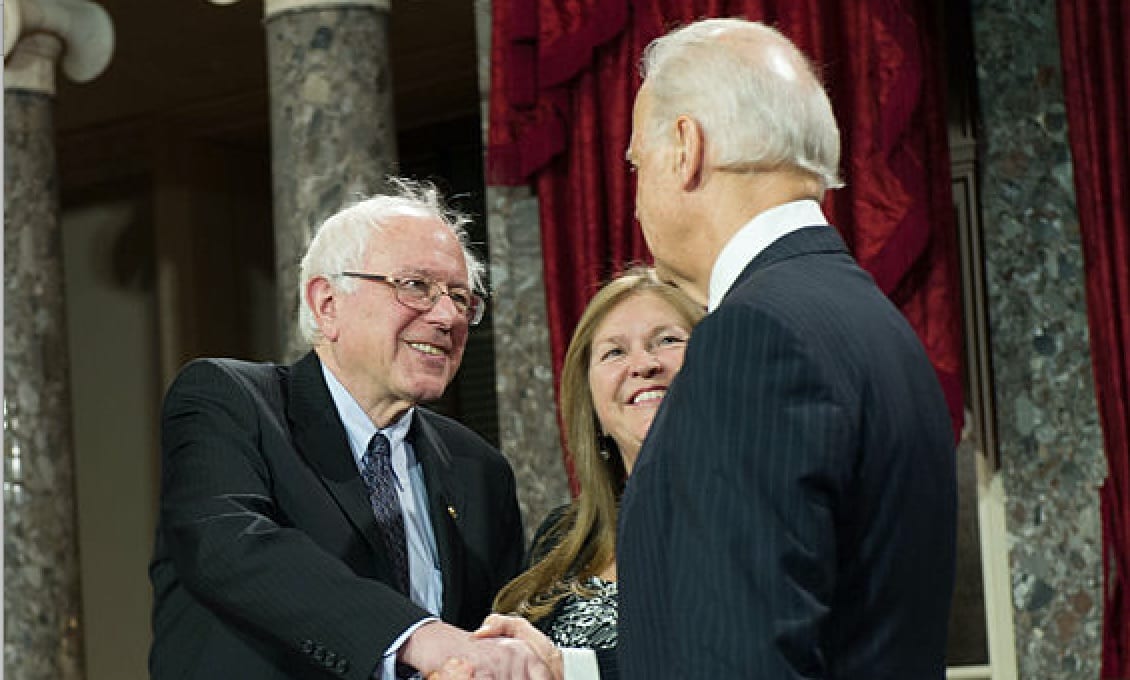 Hey, lay off that geezer stuff when political talk turns to the fitness of Bernie Sanders (aetas 77) and Joe Biden (aetas 76) to fill the considerable office of president. I find such talk both unnecessary and disagreeable.

The generic reason for this is that senior-citizen status was long seen as a political qualification rather than a disability. For instance, the Latin root of the word “Senate” is senex,for old; meaning venerable, wise, experienced, all that stuff.

Then there’s this. Save for the accidents of geography, I could have gone to high school with Bernie and Biden. Our birth dates differ by mere months. By some strange historical design, we might have graduated in the same class. I do not know that we would have ever double-, or triple-, dated: say, at a showing of The Big Country, with Gregory Peck. Bernie might have come unglued at the contemptuous treatment visited by Charles Bickford’s upper-crust cattle baron upon his ruffian of a rival, Burl Ives. Bernie might have stalked from the theater and organized a picket line. Biden would have been oblivious as he chatted up, or embraced, whole rows of popcorn-crunching viewers. Yet surely there is something to be said for those who saw Dick Clark in his sleek and smiling prime, and know how to drive a stick-shift Chevy; who perhaps acknowledge growing misty upon hearing the opening bars of “Earth Angel.” I tell you, we have been around the block a few times and sipped a few soda fountain Cokes. We have some idea of what’s what.

The problem with the notion of my contemporaries, Bernie and Joe, either one of them, as president of the United States isn’t really their physical age. It’s the age of their political ideas. They appear not to have learned a whole lot during the tumultuous years since, oh, 1965, 1966, along in there. Bernie, the glib socialist, I would assume to have learned less than Joe, whose political creed could be classified as standard 1970s common-guy liberal.

There are worse things, I can tell you. Such as socialism. Among the worthless, moss-encrusted notions that deface political understanding, socialism stands in the front rank: proof that no bad idea really ever dies. To indulge in a 1950s reference, socialism is the Christopher Lee — the Count Dracula, that is, Hammer Films-style — of political creeds. It keeps coming back, with fangs bared — most recently under Bernie’s patronage.

It’s not entirely clear what variety of socialism Bernie embraces: not public ownership of the means of production. He may have no trouble with public ownership as a concept, but he knows the voters aren’t buying. What he loves, by whatever name, is government direction and supervision: possibly a handier way of doing socialism than outright ownership. You don’t pay for what you don’t own. You tax others and let them pay. We call these unfortunates “the elite” — “the one percent.” Their vulnerability consists in having, like Charles Bickford, in The Big Country, made Burl Ives resentful of another’s power and glory.

We understand Bernie better — along with my other “classmate,” Joe, not to mention Elizabeth Warren, AOC, and such like — by reflecting, not unkindly, on how really ancient socialism is as an idea; as an obsession; as a heresy, if truth be told. Way back when Bernie and I — I’m guessing — were negotiating House of Wax, in 3D, and popping Grapettes, the socialists already had a long and ancient rap sheet.

“You’ve got it; I want it.” Such is the eternal, and enduringly fatal, idea behind doctrines of redistribution and punishment for the secular sin of doing well. At the root of the matter: Envy, fourth of the Seven Deadly Sins. “You’ve got it; I’m taking it.”

Bernie, ah, Bernie! — how I wish you and I and Joe could have sat down, c. 1959, and parsed the world’s problems, possibly to mutual advantage. Maybe life was dicier and more complicated back in the ’50s than it seemed. Durned if it’s not now.