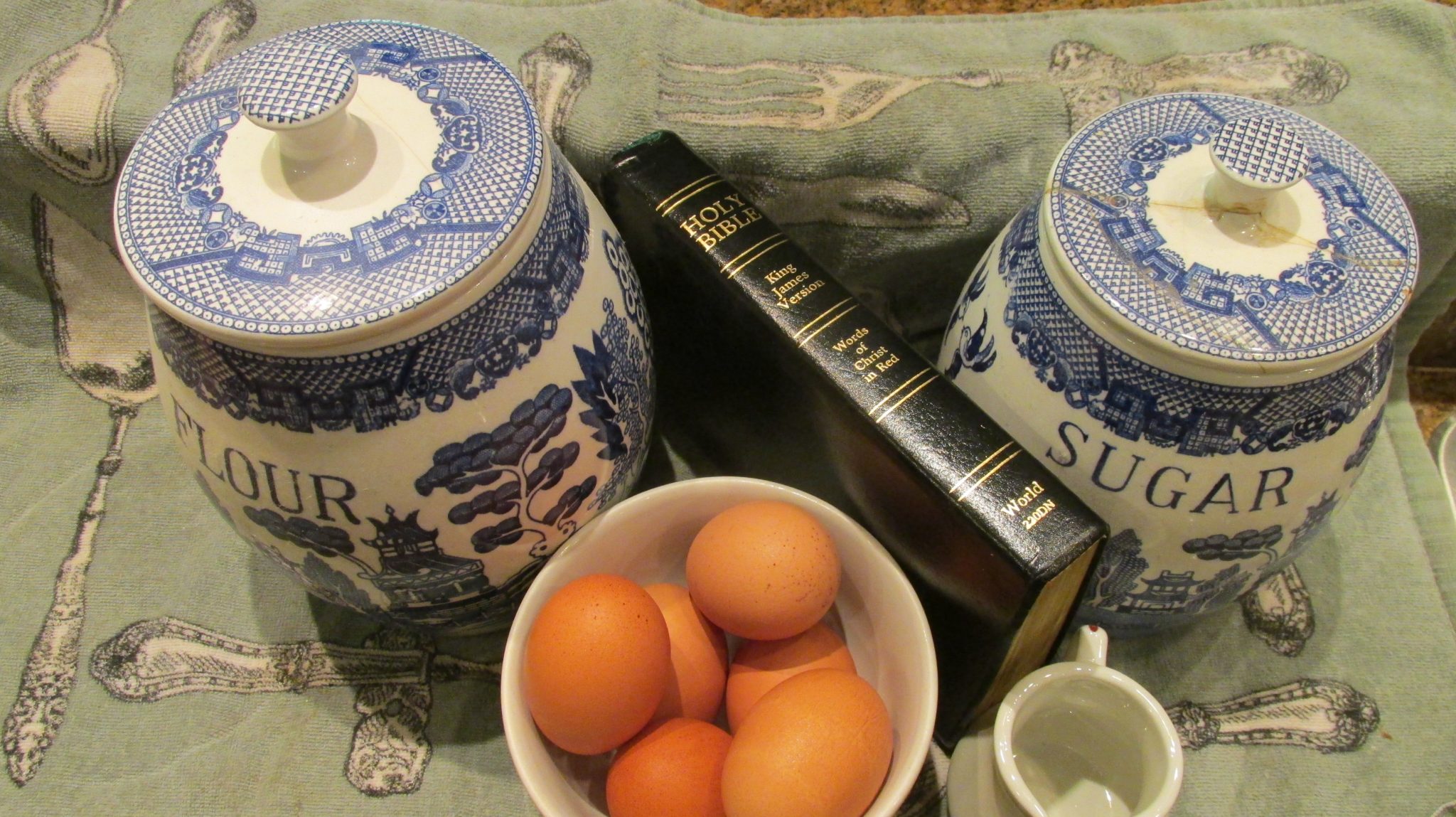 Grandfather Jacob Elijah Howard owned sufficient property to support a couple of sharecroppers. He kept the usual range of small farm livestock, and a fair-sized orchard. He planted corn, sweet potatoes, and potatoes. He’d catch blacksnakes to put in the old log granary to keep rodents and other pests down.

Life wasn’t easy, but Jacob provided for his family, and everyone pitched in.

Now, I don’t suppose many family recipes for Bible Cake, also known as Scripture Cake, Hallelujah Cake, or Old Testament Cake, were the same. The brides would have received the recipe from their mothers-in-law, consisting of quotes from the Old Testament, mischievously passed on to encourage baking prowess, and instill piety.

Gertrude got her version from Jake’s mother, Great-Grandmother Sarah Mandy (Coldiron) Howard, who got her recipe from Great-Great-Grandmother Mahala (Brock) Howard. Now, Sarah was a devout Catholic, married into a family of devoted Baptists. She accepted the gift graciously, and once settled in, began puzzling out the ingredients she’d need. Which, of course explains the evolution of this uniquely Howard recipe for Bible Cake. Back in those days, Catholics weren’t actually encouraged to read the Scriptures on their own. Those that did tended to concentrate on the New Testament. Protestants, and particularly Baptists, on the other hand, tended to read the heck out of their bibles, particularly the Old Testament, and particularly in the piney woods.

Great-Grandmother applied herself to King James and solved the riddle, as generations of brides had done before her. But in her case, on each successive baking, a bit more of the New Testament was folded in. Eventually, Amos gave way to Luke (leavening), Leviticus to Mark (salt), Judges to Peter (milk), and Samuel to Matthew (honey).

After World War I, part of a major diaspora from the mountain hollers, Grandfather Jacob, Grandmother Gertrude, and their eight kids left the old homestead and headed west. Then the Great Depression, and World War II. Traditions faltered.

After World War II, their youngest son, George Calloway Howard, married Georgia May — my parents. It was up to Aunt Sarah May, my dad’s oldest sister, to pass down her version of

Of course it wasn’t really “a piece of cake.” Looking up the cited passage wasn’t simply a matter of finding the right verse. Take Genesis 43:11, for example — “If it must be so now, do this: take of the best of the fruits of the land in your vessels, and carry down the man a present, a little balm, a little honey, spices, and myrrh, nuts, and almonds.” You had to “sift” or “weigh” the verse and figure out what applied to the recipe at hand, and disregard what didn’t.

Time just seems to keep just slipping away. School, the Vietnam war, Life. I traveled, married, and kept traveling. My parents passed away. My brothers scattered. As executor, I came across this recipe and reached out to one of Dad’s surviving sisters, Aunt Ruth. She graciously provided a “key.” “Of course,” she wrote, “I always added a couple of cups of chopped Psalms 17:8.”

1 teaspoon each ground mace, cloves, allspice (or to taste)

Fold in beaten egg whites. Pour into well-greased sugared cake/loaf pans (my aunts halved the recipe and used Bundt pans) sprinkled with the cup of chopped walnuts. *If the dough seems stiff, add enough Judges 4:19 (or 1 Peter 2.2) to loosen it up before folding in the egg whites.

Bake in a medium quick oven (350–375 °F) for one hour until golden brown or until a toothpick comes out clean. Cool in pan for 15 minutes before inverting onto wire rack. These cakes will store indefinitely in a tin or on wooden plates under covered bell jars.

Now, that’s the “key” I got from Aunt Ruth, but if I’d been obliged to puzzle out the ingredients from the biblical quotes, the end result would likely have been wildly different. Yeast instead of baking powder, milk instead of water? The varieties of “nuts” are largely unspecified, as are the specific spices (maybe a bit of ginger? Cardamom? A pinch of black pepper? Fennel? Anise?).

Bread crumbs come to mind whenever bread or loaves are mentioned, and I’ve often puzzled why, as often as dates are mentioned in the various passages, they don’t show up in the recipe. I suspect that while figs were available in trade, dates may have been harder to come by. To my knowledge, citrus fruits like lemons, limes, even quinces are not mentioned in Scripture.  On the other hand, references to fruit and fruit trees are legion. And since there is no mention of how the “cake” is to be cooked, pouring the batter into a buttered bag, or mold, and boiling or steaming it for a few hours, it would make a mighty fine steamed “pudding.”