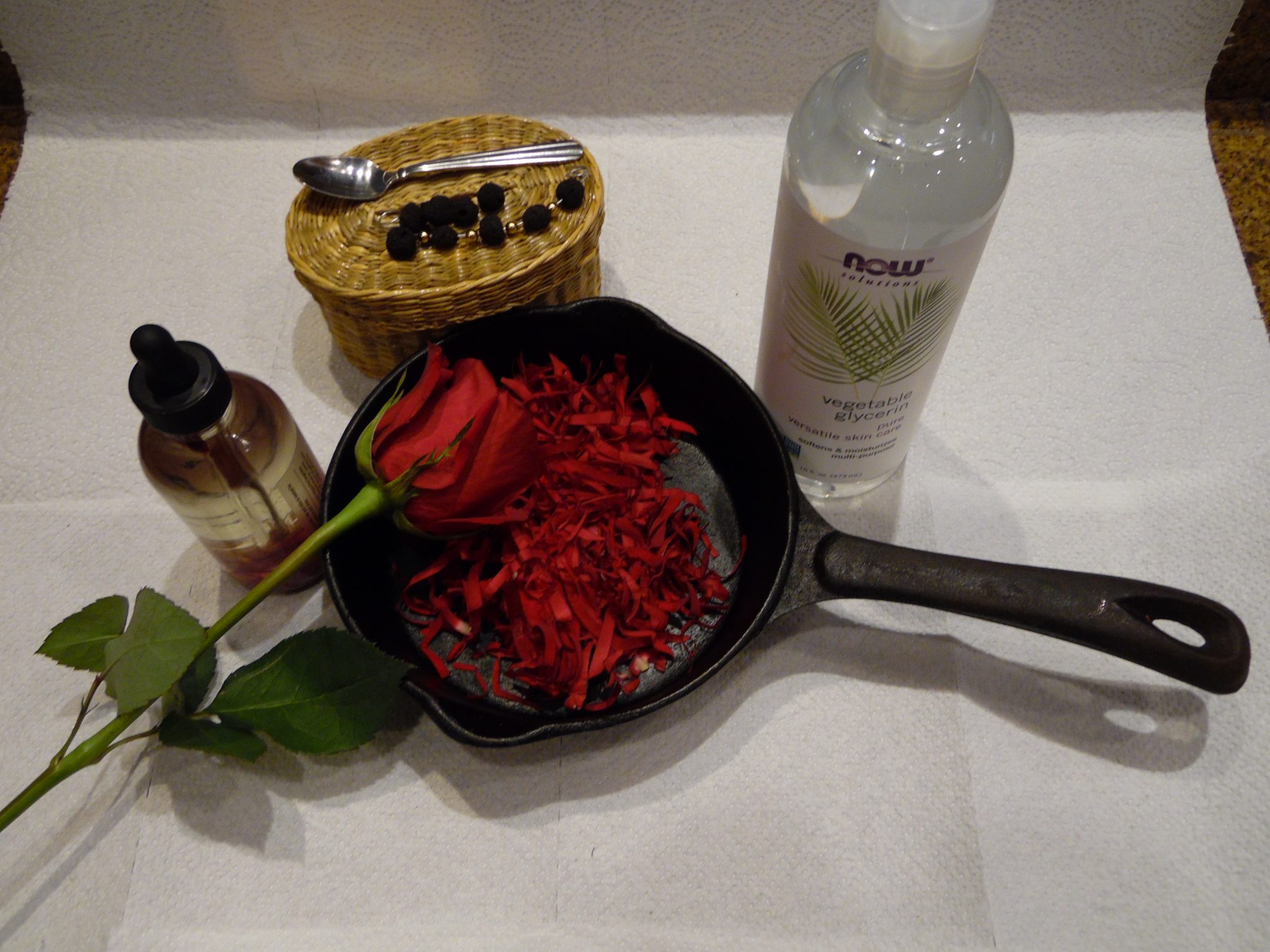 My dad’s folks came from the hollers of Southeast Kentucky — but my three brothers and I were raised in the Pacific Northwest. Dad talked a little about his days growing up, usually around the campfire when camping or fishing, but most of my knowledge about my hillbilly heritage came from snippets gleaned from my aunts. Dad was the youngest of a large family, and his sisters would descend on us pretty much every year (I suspect it was to make sure dad was treating us all alright). One visit, Aunt May was showing off a little string of beads her mom had made for her when she was young. “They’re made out of rose petals,” she said.

Well, they sure didn’t look like rose petals. But her string of oddly textured black beads sure did smell like roses. After more than 50 years.

It was just a little thing — apparently common enough way back then, but little known today. I asked her how it was made and she said, “There’s nothing to it, honey. You just pick a bunch of roses and toss ’em into an iron pot. You let them sit for a week, and roll them into little balls.”

It turns out that way back in the Middle Ages, aristocratic ladies with lavish gardens would make beads from their best roses and string them into “rosaries” to sweeten their devotions. The traditions drifted across the ocean with the early colonists, and rooted in the hills of Appalachia.

My grandma’s recipe did indeed involve just “picking a bunch of roses” (about a gallon’s worth), and tossing them in an iron pot. Grandma used a lidded cast-iron Dutch oven. But first she chopped up the petals into thin shreds. She kept the lid on, except to stir it all up real good every morning and every evening, and “as often in-between as she thought about it.” The frequent stirring is a necessary step, making up for the absence of preservatives or fungicides to prevent mold or mildew from ruining the batch. Grandma’s beads were 100 percent organic!

Within a week, the petals darken and eventually turn black, collapsing into a mushy pulp the consistency of soft clay. Then you just roll the mash up into little balls the size of marbles (don’t be impatient; it takes time). When the beads can hold their shape, pierce them with toothpicks or pins and stick them into cork or cardboard, to dry in the round. After a week, they’ll shrink up by 50 percent and harden into little beads, ready to be lightly buffed with a soft cloth and strung.

If the first few beads turn out a bit misshapen or uneven, don’t worry about it. There is a definite technique to it, and the more you make, the more consistent the product. Learning to spot the right consistency and judging when they are ready for piercing takes a bit of practice — like most anything.

As you might imagine, there are modern shortcuts. Instead of the “drudgery” of chopping and stirring every day for a week, you can just toss them into a big blender or food processor with a third (to a half) cup of water and whir into mush. Scrape out the pulp into a cast-iron frying pan if you want the beads to be black, and heat gently until the excess moisture cooks off. Be careful not to let the mixture come to a boil or you risk cooking off the volatile aromatic oils. If you don’t want black beads, use a non-reactive pan, and you’ll get pleasing tan and reddish brown effects. When you’ve got it to the right consistency, let it cool enough to work, and roll away. By varying the size of the beads, you can produce graduated or variegated strands.

Many modern varieties of roses are engineered for looks and longevity and have little to no aroma. You can fix that by adding a few drops of rose oil to the mash, or to your palms while rolling. I know it seems like a shame to have to add rose oil to such a traditional indulgence, but such is progress. You can of course avoid this by using roses that still smell like roses.

If you add a drop or two of glycerin to your palms, the rolling goes a bit easier — but you don’t really need it. Don’t worry when your palms take on the color of the beads. It washes right off (with a bit of scrubbing).

Grandma made the strings long enough to slip over her daughters’ heads, tied the strings together, and worried the loose ends of the strings back into the beads so they wouldn’t show.

I suppose you could tie little knots between the beads, like strings of real pearls, and enhance your necklaces or bracelets with jewelry findings. Lobster claw clasps and swivels are available in most art and craft stores. You can even add little silver or gold spacer beads, which really elevate the whole effect, and add more than a touch of elegance.

It might sound trite to preach about the nobility of rediscovering old skills and crafts to pass on to future generations. But for the life of me I can’t imagine why it should. We absolutely should value folkways that teach repurposing, patience, organic chemistry, and lasting durability, in an age of cell phones, instant gratification, social media, and overnight delivery.

Harvesting, prepping, and completing strings of fragrant rose petal beads is a harmless, wholesome, and enjoyable little exercise in nostalgia that is certainly worthy of being passed on to future generations — at least until people stop growing roses.