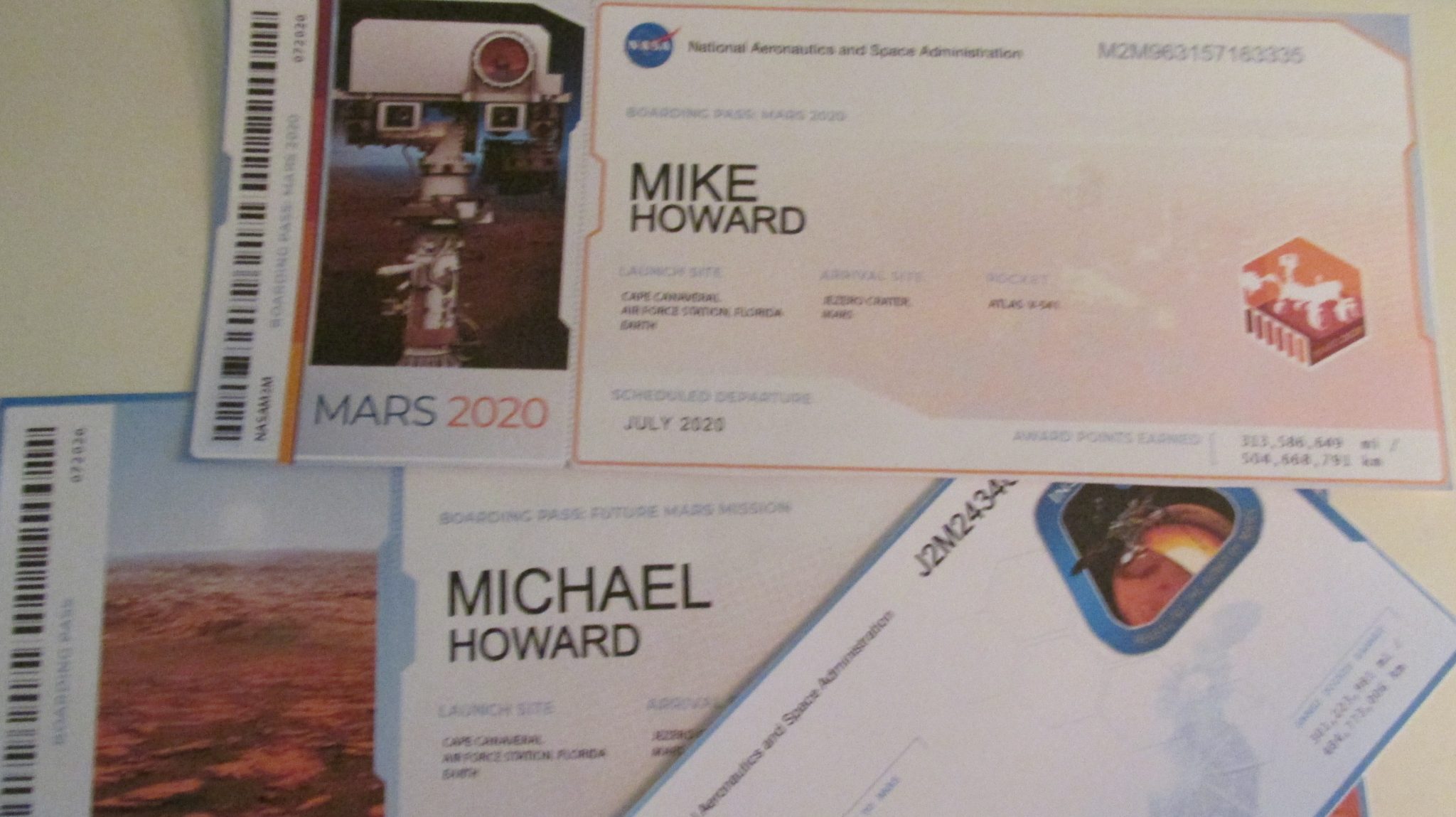 Mars. I’m launching July 30, 2020, on an Atlas V-451 rocket, from Cape Canaveral. Yep — got my boarding pass and everything. We’ll achieve Earth orbit and hurtle out into space on a seven-month voyage — dodge her two moons, and touch down in Jezero Crater in February 2021. The mission? To search for signs of past microbial life, characterize the planet’s climate and geology, collect samples for future return to Earth, and pave the way for human exploration of the Red Planet. The stuff that dreams are made of.

Sure, it’s a one-way trip. It’s actually my second. My first launch was back in May 2018, onboard the Insight Lander NASA Discovery Program mission, and I’m still up there.

Not actually in person — but my name is inscribed on one of two silicon chips, and I’m not alone. The Microdevices Laboratory at NASA’s Jet Propulsion Laboratory in Pasadena, California, used an electron beam to etch the names of over two million kids (of all ages) onto silicon chips with lines of text smaller than one-thousandth the width of a human hair (75 nanometers).

Now I’m heading back, this time with the Mars 2020 Perseverance Rover. It’s an exciting scenario. Not quite Planes, Trains, and Automobiles, but close. Perseverance is the size of a golf cart, and it’s equipped with a drill that can collect core samples not only recording signs of habitable conditions on Mars in the ancient past, but also potentially signs of past organic life. It’ll stash the samples in metal tubes, and stack them for recovery in July 2026, by the Sample Return Lander, for return to Earth with the Earth Return Orbiter.

The Perseverance Rover is bringing along a friend, the Mars Helicopter Ingenuity. Ingenuity is a solar-powered autonomous helicopter designed to fly in Mars’ thin atmosphere (just 1 percent of Earth’s). Ingenuity weighs in at less than four pounds and has four-foot double rotors. It even has a battery-powered heater to withstand Martian nights. Ingenuity isn’t involved in Perseverance’s experiments, but it will serve as an essential demonstration platform for future Mars aerial robotic scouts, stand-alone science craft, and even transport for supplies and personnel.

Pretty neat stuff. I remember staring enthralled at the projector screen in my sixth grade class as we studied space exploration in Adams Elementary School. An animated Disney educational film projected three-stage rockets striking out for Mars by the year 2000. I licked the tip of my pencil and did the math. I’d be 49 years old, and wondered if that would be too old to make the flight.

True — NASA is running 20 years behind schedule, and true — I won’t actually be setting foot on the Red Planet myself. But hey, it’s still a vicarious thrill to be able to participate in a tangible way.

Didn’t sign up for the Perseverance mission? No problem. There is still plenty of time to sign up for the Mars 2026 round trip sample recovery mission. Now that trip really is about planes, trains, and automobiles. It’s too early to tell which launch vehicle they’ll use to get off Earth, but it will be carrying a Mars orbiter, a car-sized rover to retrieve the samples, multiple helicopters, and a rocket to get the samples back to the orbiter. The orbiter will then return to Earth, and a reentry vehicle will ferry the samples through our atmosphere for up close and personal study. Links to access boarding passes, and additional information on the mission are available here.

Of course I could always wait for one of NASA’s Space Launch System and Orion “manned” exploration vehicles, currently scheduled for sometime in the 2030s.

I’m not sure I can wait that long. Then again, I’ve been a Martian since 2017, and between Insight and Perseverance, I have logged 614,810,630 frequent flyer miles. Add in my round-trip 2026 flight with the Mars Sample Return mission, and I’ll have over 1,714,810,630 frequent flier miles. That’s almost two billion. Heck, that ought to count for something.

Seattle native Mike Howard is a travel journalist working out of the Pacific Northwest. His articles have appeared in Hemispheres In-Flight Magazine, Caribbean Beach Magazine, Whisky Magazine, World Nomads, and Great Escapes Magazine. He has authored multiple “Custom Guides” for Trip.com (Malta, Victoria BC and Surrounds, Seattle and the Olympic Peninsula, Montenegro, and Germany), and is a destination expert for those regions.