Cultural Decline,Top Story Afghanistan,Fall of Kabul,Joe Biden,Taliban,Winston Churchill Be Churchill to Biden’s Chamberlain - The American Spectator | USA News and Politics
Menu
Cultural Decline
Be Churchill to Biden’s Chamberlain
If we are looking for courage, we will need to find it within ourselves.
by Shmuel Klatzkin
Memorial to Winston Churchill in Guildhall Yard in London (IR Stone/Shutterstock.com) 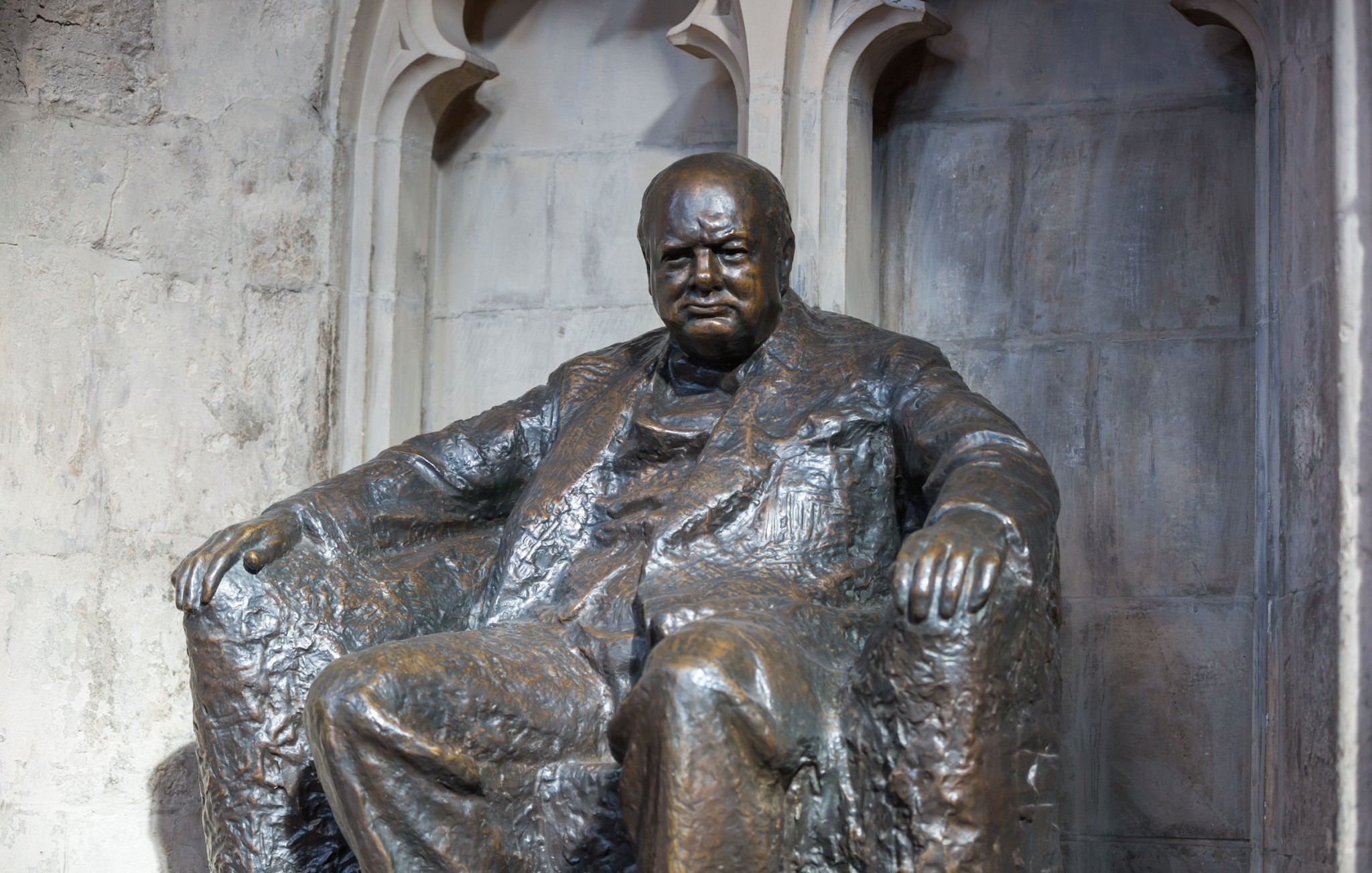 Before, during, and after the self-inflicted disaster of appeasement, Winston Churchill criticized Neville Chamberlain’s policy in the starkest language. He said to the Prime Minister, “You were given the choice between war and dishonour. You chose dishonour, and you will have war.”

Churchill did not continue to dwell on Chamberlain’s failings, because his emphasis was on a victory over Nazism, not on destroying Chamberlain. In fact, Chamberlain was the leader of the Conservative Party to which Churchill at that time belonged, and Churchill wanted to work with Chamberlain, as well as with the other parties, in a broad united national front against what Churchill recognized was a mortal threat to Britain and “an outrage against the civilisation and the freedom of the whole world.”

Churchill saw that there was a problem in the culture itself of Britain and its allies that left them all unable to defend themselves against a fiercely committed enemy. Addressing that deep-seated cultural sickness was his tremendous focus.

In the aftermath of the Munich surrender to Hitler, Churchill made his moral point before the House of Commons in memorable words:

… Terrible words have for the time being been pronounced against the Western Democracies: “Thou art weighted in the balance and found wanting.” And do not suppose that this is the end. This is only the beginning of the reckoning. This is only the first sip, the first foretaste of the bitter cup that will be proffered to us year by year unless, by a supreme recovery of moral health and martial vigour, we arise again and take our stand for freedom as in the olden time.

Churchill’s greatness as a statesman was in recognizing the centrality of the moral issues and communicating the moral imperative with vigor, clarity, and power. How rare that is in politics. Who in power today could one call a statesman without smirking?

At the core of any politics worth standing for is a moral commitment. Like it or not, the Taliban, like al Qaeda, are understood by their followers as standing for immutable moral law. This inspires them to fight for victory. This enables them to play the long game against the West, who experience has taught them can win in the short game but lose interest over the long term.

The Taliban are not blind and not ignorant of us — of what we have shown them. They know that when our dander is up, we can be dangerous. But they see that we get distracted after a while. They are content to fight a long and grinding war of attrition from which nothing distracts them. They are sure that their commitment to unchanging divine laws will eventually bring them victory when the moral shortcomings of their enemies sap their will and commitment.

Last week was their victory. They read Biden correctly as hollow and the power he directed as sham. Sham not because there is lack of bravery or skill in our military, or a failing in materiel, but because of something far more fundamental — the lack of will to use those advantages in the struggle. Biden’s fey posturings held no magic. The Taliban was not the American electorate, with so many wanting desperately to be relieved of every uncomfortable feeling by a man telling them whatever he thinks they want to hear. The Taliban see that the President is wearing no clothes. They knew that there was no longer any will to oppose them. Like Hitler in France in May 1940, they blitzed across Afghanistan in mere weeks, with the Americans frantically destroying computers just as the French had hurried to burn their government documents before the Wehrmacht came goosestepping into Paris.

We have been capable of the great fight. When the Civil War was finally cast in terms of the great moral struggle to end slavery, the Union proved itself ready to stay in as long as it took. The Southern strategy depended on the North being unwilling to suffer the endless losses of the dead and mutilated. But when galvanized by the Emancipation Proclamation, the ideas of the Gettysburg Address and the Battle Hymn of the Republic (“Let us die to make men free”), that did not happen. A supreme moral dedication brought victory.

But after the war, seeking to get back to comfort, the Union eventually lost the will to enforce the bold new constitutional amendments and civil rights statutes against a determined KKK guerilla. The result was the advent of Jim Crow, state-sponsored racial suppression. It took many decades to build up the moral fortitude to push away those shameful legal structures of oppression and make good on the promises of Lincoln and the Congress to guarantee equal rights for all after the Civil War.

Churchill and Roosevelt maintained the moral focus of World War II’s titanic struggle. The Allies’ moral commitment to save the world from totalitarianism proved stronger than either the Japanese kamikaze dedication or Hitler’s willingness to bring on the Götterdämmerung and see Germany reduced to ashes rather than surrender.

But by the time of Vietnam, an ill-chosen battlefield and a relativistic mindset guaranteed that even though American arms were undefeated, the war would be lost. Kissinger negotiated “peace with honor,” but the Democratic Congress, treating all things Nixon as damned, refused to back the terms of the Paris treaty and vetoed any further commitment, rolling out the red carpet for Ho Chi’s minions to march nearly unopposed into Saigon.

The helicopters of Saigon were back in Kabul. The same panic, the same undefeated military, the same lost war, the same directionless leadership, the same sense of lost purpose. While we have been busy tearing down monuments and ripping up our history, the Taliban know exactly where they are in a story that stretches through the centuries. While we have been tearing each other apart, accusing each other of the gravest crimes, and treating our fellow citizens as if they were enemy number one, we have been empowering the beheaders, the stoners, the dynamiters of history, and the throwers. Of acid in women’s faces. Led by those who think moral strength is an orgy of self-flagellation, we find ourselves without the will to stand behind the girls who want to go to school, the women who would like to walk outside not covered head to toe, or the people of any gender who want to express their own understanding of what G-d requires of them. We have effectively given the green light to those violent people who would enforce their beliefs on everyone they can and cause harm to those they cannot defeat.

Biden’s pitiful deflection of any responsibility for the Afghan disaster, coming shortly after Andrew Cuomo’s pitiful public non-apology, is a case study in moral weakness. And in a style increasingly familiar, he topped off his object lesson by quoting the famous sign on Harry Truman’s Oval Office desk — The Buck Stops Here — as if by putting whipped cream on a cow pie he could get us to call it a sundae. Even his flacks in the media aren’t digging their spoons into this pile.

If we are looking for courage, we will need to find it in ourselves. Churchill’s words after Munich ring true today. If we don’t find the way back to courageous commitment to civilization and liberty, this is only the beginning of an unending chain of humiliation and defeat.

Our commitment stretches back to the Framers and the Founders, back to the Petition of Right and Magna Carta, back to the seer and the prophets of the Bible. We have the moral resources and a history which lets us know our story, and shows us where we can make our own irreplaceable contribution to civilization and freedom. Our democratic responsibility requires us to embrace that ourselves, without waiting for a leader.

Only when we make that kind of commitment can we expect to bring forth a similar kind of a leader. Churchill knew this well. After World War II, responding to those who were honoring him, he said it was the people who had enabled him:

Their will was resolute and remorseless and, as it proved, unconquerable. It fell to me to express it, and if I found the right words you must remember that I have always earned my living by my pen and by my tongue. It was a nation and race dwelling all round the globe that had the lion’s heart. I had the luck to be called upon to give the roar. I also hope that I sometimes suggested to the lion the right places to use his claws.

The Chamberlains and the Bidens and the Cuomos have strutted their moment on the stage, empowered by our fears and flaws and illusions. At this dark moment, we must take the stage ourselves, and with our courage, call forth the lion’s roar once again.