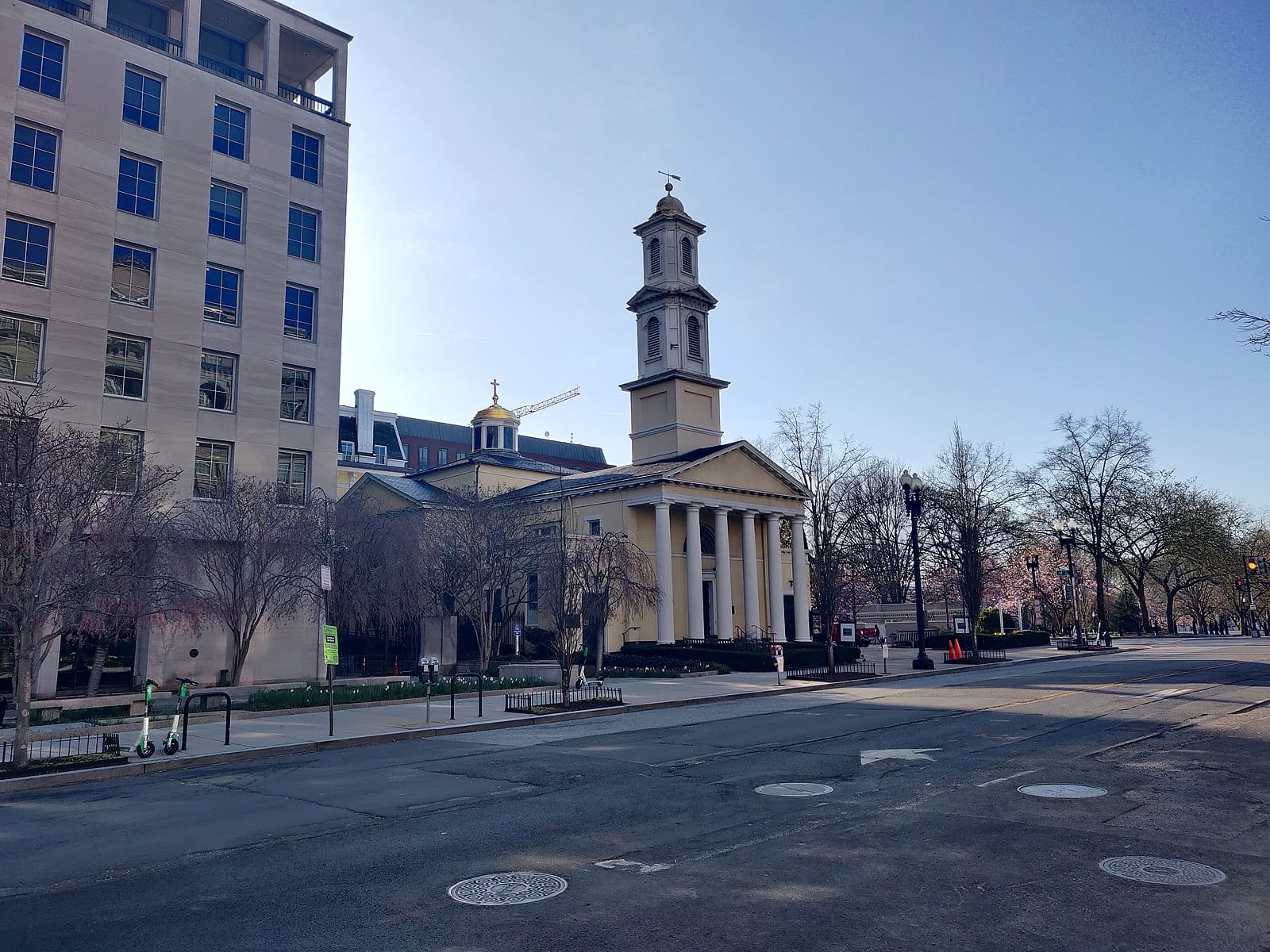 While we lived in the District, we were both members of St. John’s Church Lafayette Square. It was where we married. Kathy taught Sunday school there, and Bob gave tours highlighting the noble architecture, aesthetic beauty, and history of this “church of the presidents” that has welcomed every commander-in-chief since James Madison.

We were deeply saddened that rioters set fire to a portion of a church the other weekend, but we were especially disappointed by the reaction of church leaders to these events. We read the daily reflection statements expressing complete sympathy and support for the rioting protestors, but not a single line opposing church arson or calling for non-violence. When President Trump stopped at the church on June 1, we saw a president standing against the violent desecration of our nation’s houses of worship. But the church vestry saw him through a reactionary political lens, issuing a statement beginning with the words that they were “shocked and appalled” by the President’s presence.  Indeed, church leaders later sought out multiple media outlets to condemn the president, voiced outrage at his presence with a Bible without their permission, and express the hope that outrage over the continuing abuse and destruction of black lives could match that engendered by President Trump’s appearance at church.

This reading of the president’s appearance and unwillingness to condemn rioters and violence — even when some rioters sought to set the historic church itself aflame — suggest hatred against President Trump has poisoned hearts and minds in the congregation. Indeed, this was evident from a recent Washington Post op-ed by a fellow St. John’s parishioner who highlighted the teaching of “treating all with kindness and respect” while devoting two paragraphs to shallow attacks on the president’s visit, manners, and personal appearance. This doublespeak from church members suggests church leadership has failed to convey the central teachings of Christian forgiveness and humility as the only pathway to drain hate festering in the heart.

Instead, President Trump has become an acceptable target of scorn among the people who profess to pray for him each Sunday. And what of St. John’s Church’s sidestepping of its historic role to minister to the commander-in-chief, whose burdens are heaviest among us? How could the church even begin to minister to his soul after denouncing him as a person?

These recent events bring to mind the Lincoln’s Lyceum address delivered in 1838 amid similar public unrest. Contemplating the rise of mob violence across the United States and its threat to America’s political institutions, Lincoln argued that the foundations of free society must be “hewn from the quarry of sober reason” in the wake of certain passions that “will in the future be our enemy.” Instead, “unimpassioned reason must furnish all the materials for our future support and defense” as it is “moulded into a general intelligence, sound morality and, in particular, a reverence for the constitution and laws.”

Our religious leaders have political leanings, as all Americans do. But they must not allow their overt political preferences to unleash passions that lead congregants to reflexively reject our president and the policies of his administration. Most tragically, once the church commits itself to antagonistic politics, it also blinds itself to areas of common cause — real progress toward a more just and perfect nation.

Sadly, it seems our former church has instead chosen to moor itself to progressivism and resistance to President Trump, as though disgust for him has more eternal merit than love and charity toward all. The church is so eager to demonstrate its affinity for one political side that it choose not to speak out against the rioting, looting, and violence perpetrated by followers of its preferred ideology, even when this violence is directed at our most vulnerable communities. By wallowing in such politics, this church has slipped its anchor from its bedrock Christian teachings to roil by the whims of mobocracy.

Instead, the church should focus on building the pillar of “sound morality” Lincoln described, to exorcise those passions and hatreds that keep us from God and divide us from each other. Dr. Martin Luther King’s unifying message of God’s love and non-violence protest — an approach that led to dismantling segregation in the United States and in part inspired the liberation of millions from communism abroad — is one avenue to consider in these times. We hope and pray that our church leaders will seek to reverse their current destructive course for the good of our communities and our country.