Mrs. Merkel, like Mr. Macron, came to lobby President Trump not to revoke the Obama nuclear weapons deal with Iran. Mrs. Merkel’s agenda also included persuading the president not to impose new tariffs on German goods. Soon after Trump announced tariffs on steel and aluminum imports, he exempted the European Union, of which Germany is a member, from them. But he has since threatened tariffs on European cars, which is one of Germany’s biggest exports to the U.S., which obviously worries Merkel.

Merkel appears to have failed — as did Macron — to persuade Trump not to revoke the Iran nuclear deal. We don’t know if her pleas on trade had any greater effect.

Trump’s relationship to Merkel is much different from his friendship with Macron for two big reasons. First is our huge $65 billion trade deficit with Germany, which the president believes unfair. Second is Germany’s failure to spend enough on defense.

This year, Germany will spend about 1.24% of its Gross Domestic Product on defense. The NATO nations agreed more than ten years ago to spend at least 2% of their GDP on defense. Only a very few do, and Germany isn’t one of them. In fact, its defense spending is going to rise to about 1.25% of GDP in 2025 and then decline further.

One of the most profound lessons of the 20th century is that Germany should never again be powerful militarily. Two world wars, resulting in scores of millions of deaths, are proof enough of that. For those of us who grew up in the Fifties and Sixties, it’s very strange to hear an American president demanding more military spending by Germany, but Trump is dead bang right on this one, because Germany is a freeloader.

The German economy is the fourth largest in the world. Germany’s Gross Domestic Product was over $3.6 trillion in 2017 and is expected to grow by about 2% this year. The German government expects that 500,000 new jobs will be created this year.

Part of the problem with Germany’s defense policy is Merkel’s political domination of Germany and the European Union for the past decade. She, and her defense minister, Ursula von der Leyen, have let the German military’s readiness decay to an alarming level.

The Bartels report said, among other things, that at the end of 2017 none of Germany’s submarines were available for deployment, nor were any of its large military transport aircraft. Fighter aircraft, ships, and tanker aircraft were mostly outdated, and also suffered from a huge decline in readiness due to a lack of spare parts and mismanagement of repairs. Pilots were unable to train because of poorly-maintained aircraft.

In short, Merkel and von der Leyen have left the German military in as bad a state as ours was at the end of Obama’s term in office. But we are spending more to at least begin fixing the problem. Germany isn’t.

We can’t overlook the contributions to defense that Germany is managing to make despite the parlous state of its armed forces. One of the largest forces in NATO’s Afghanistan contingent is German, comprising about one thousand men. Over almost seventeen years of war, Germany has stuck with us in Afghanistan as have few other NATO members.

During his campaign, Trump on several occasions said that NATO was obsolete. Only hours after his confirmation, Secretary of State Mike Pompeo left for his first NATO ministers meeting. There, he again pressed Trump’s case for more defense spending by Germany and the many other NATO members who don’t even meet the 2% of GDP commitment.

Merkel and von der Leyen deserve the blame Trump assigns to them for refusing to spend more on defense. The Bartels report proves the point.

Von der Leyen, in a February speech to a Munich conference of defense ministers, implicitly criticized Trump’s approach to defense. Without mentioning him by name, she bashed his approach to military spending as a substitute for nation-building and support of the UN. While saying Germany stands by its commitment to NATO — the 2% of GDP spending obligation — she said that all NATO nations must bring both hard and soft power — diplomacy, aid to foreign nations, and such — to the table. She also said that Germany wanted to increase European defense power independent of NATO. Her French counterpart, Florence Parly, echoed her remarks.

One of my favorite pictures from a few years back shows, on top, four demure European ladies sitting together, smiling, with their hands in their pockets. They were at the time the defense ministers of Sweden, Norway, the Netherlands, and Germany. (Mrs. Parley’s tenure postdates that photo.) The bottom half is a picture of their principal adversary. No, it’s not Donald Trump as you might deduce from their countries’ policies. It shows an unsmiling uniformed General of the Army Sergei Shoigu, the Russian defense minister. 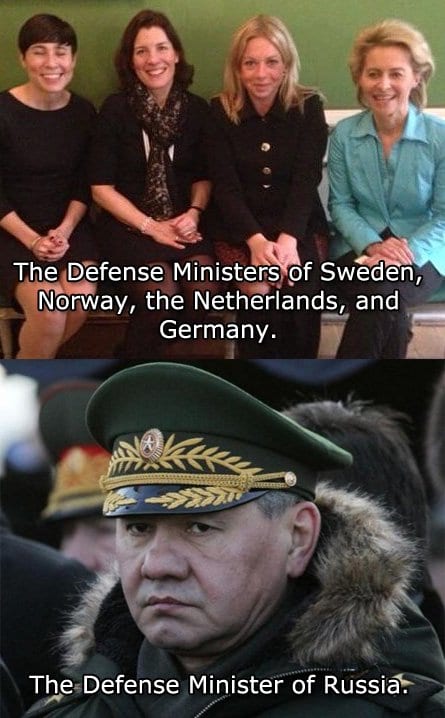 The commonality among the ladies isn’t only their gender but the countries they represent. Sweden doesn’t belong to NATO, but the others — plus France — are NATO members that fail to honor the 2% spending commitment.

After her Friday meeting with Trump, Merkel said at their joint press conference that Germany will have to increase its contributions to NATO over the next few years. But she has made no move to do so and isn’t likely to do so without further pressure from the president.

German car exports to the U.S. amounted to 22% of its total car sales in 2016. It is Germany’s biggest trade vulnerability.

Trump lost his leverage of the steel and aluminum tariffs, but not the possible car tariffs. If the president imposed a tariff on European cars, saying that it would be relieved for any NATO member that increased its defense spending to the 2% agreed on, he might be able to cause Germany and France, at least, to increase their defense spending to a reasonable level.

It’s clearly worth a try.