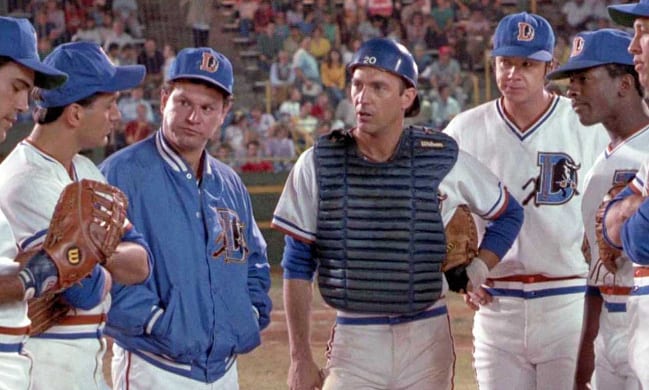 Time does get away from us, doesn’t it? I was jolted Sunday morning to read that Bull Durham, my pick for the best baseball movie ever made, first appeared on the silver screen 30 years ago this week. Can this be true?

Now that I’ve gotten over how long-in-the-tooth one of my favorite movies is, please allow me to celebrate it.

I count Bull Durham the best of the baseball best because in addition to fine acting and humor throughout its quirky but well-wrought story, the movie has the feel of real bus league baseball, its romance but also its earthiness and unglamour. And why shouldn’t it? Its director and chief screen-writer, Ron Shelton, played minor league ball in the Baltimore Orioles system for five years, making it as far as AAA with the Rochester Red Wings in 1970 before it became clear the major leagues were not in his future. He knows the thrills, chills, and perils of minor league baseball, the ambitions and fears of its young players, most of whose hearts it eventually breaks. Shelton brings all this to the screen in Bull Durham, for me about the most entertaining 108 minutes on celluloid.

It all starts with the smart but delightfully flakey Annie Savoy, a part-time community college English teacher with a passion for the Grand Old Game and for young ballplayers, saying she believes in the Church of Baseball. “I’ve tried them all (religions),” Annie tells us, “and the only church that truly feeds the soul, day in and day out, is the Church of Baseball.”

Every year Annie takes up with a Durham Bulls player at the beginning of the season and says goodbye to him at the end. “What I give them lasts a lifetime,” she says. “What they give me lasts 142 games.” Annie is played pitch-perfectly by the flakey but dishy Susan Sarandon.

Annie doesn’t pick her players/lovers on looks alone. She insists, “I’d never sleep with a ballplayer hitting under .250 unless he had a lot of RBIs or was a great glove man up the middle.” This demonstrates that whatever Professor Savoy might know about literature, she knows a good deal about what’s important in baseball. She reveals her understanding of men in general too when she says, “Sometimes when I have a ballplayer alone I’ll just read Emily Dickenson or Walt Whitman to him. And the guys are so sweet. They’ll always stay and listen. But a guy will listen to anything if he thinks it’s foreplay.” Just so.

We follow Annie to the ball park, where she is for every Bulls home game, and shortly meet the movie’s other two principals, veteran catcher Crash Davis, played by Kevin Costner, who is assigned to the Bulls to mentor a hot but immature rookie pitching prospect with a million dollar arm and a 5-cent head. This would be one Ebby Calvin “Nuke” Laloosh, played by Tim Robbins. The movie then takes us through the season which concludes with the Crash-trained Nuke called up to the majors and Crash, who loves baseball more than the game loves him, in doubt about where his next baseball job will be. The odd three-way romance works itself out and Annie finally moves from the callow Nuke to the grown-up Crash, as everyone anticipated.

Through the movie, viewers are treated to various scenes and situations, which, after allowing for comic exaggeration — no Bulls pitcher was ever wild enough to hit the bull-costumed mascot with a pitch — show us a bit of what life in the bushes is like. Or at least was like. No specific time is given for the action of the movie, but there are clues that it is probably in the sixties. We see the long, boring bus rides. We see the hijinks of young, poorly paid players full of ambition, high spirits, and testosterone with hours to fill before and after games. A favorite sequence is when the veteran Crash shows a tired Bulls team how to get a rain-day off on the road by sneaking into the other team’s field and turning their sprinkler system on. I found the beer-fueled sliding drills in the “rain” that followed amusing.

A moving and authentic scene is when manager Joe Riggins, played convincingly by the late Trey Wilson, calls a player into his office and has him shut the door. He then tells him that the Class-A Bulls are cutting him, effectively ending his baseball career. Long-time Orioles manager Earl Weaver, who put in his time in the bus-leagues, vouched for the authenticity of these melancholy meetings when he said the worst part of a manager’s job was when he has to call in a young man and “kick his dreams in the ass.”

Those who’ve suffered the tedium of the jock interview, where inarticulate athletes are asked pointless questions by TV interviewers who don’t seem to know much about the game, will be amused by the on-the-bus sequence where Crash teaches Nuke his baseball clichés, which Nuke will parrot to interviewers throughout his career: “You’ve got to play them one game at a time,” “I’m just happy to be here and hope I can help the team,” et al. Sports fans have heard these clichés enough times that some doubtless both laughed and groaned at these lessons.

Another convincing scene is early on when Crash first reports to the Bulls, justifiably resentful that he has been sent down from AAA. After hearing about what Crash considers to be a baby-sitting assignment explained to him, he explodes, saying he’s quitting baseball and storms out of the office. Riggins shows no reaction and goes about his business at his desk for a minute or so before the office door opens again, as Riggins and baseball-savvy viewers knew it would, and Crash asks, “Who we playing tomorrow?” The point being that Crash is one of those baseball men who will play the game, no matter the circumstances, as long as he can. And everyone knows it.

But this movie is a romantic comedy, not a documentary, and other scenes are played just for laughs. Like the mound conference where in mid-inning during a game the entire infield plus Crash gather at the mound to discuss what to get a teammate for a wedding gift and what to do about superstitious first baseman Jose’s mitt, which he says is cursed. Nuke is also nervous because his dad is in the stands for the first time. Amusing, and possibly not that far from some real mound conferences. Shelton has the advantage of writers and directors who’ve not played the game in that he knows what players talk about on the field, in the dugout, in the clubhouse, and after the game. A lot of the time it isn’t baseball.

I hope for those who’ve seen and liked the movie I’ve triggered some fond memories. For those who’ve not seen it, I hope I’ve piqued your curiosity about a fine baseball movie and a piece of Americana that is being justifiably honored on its anniversary week. The movie is widely available, and unlike most of what comes out of Hollywood these days, more than worth the time. And that’s no bull.