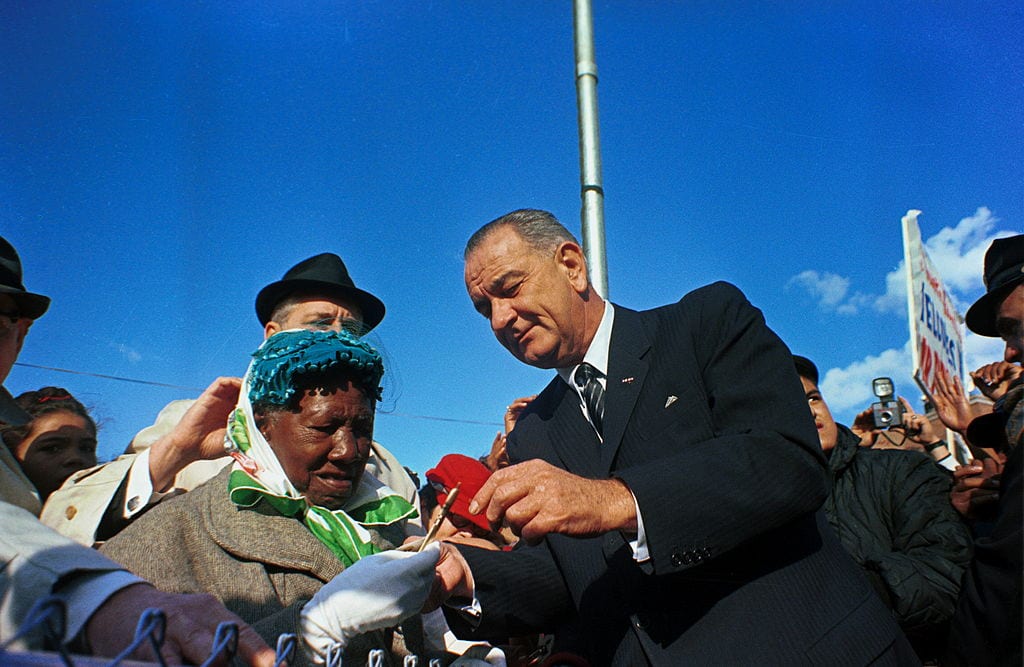 Liberals bellyache over what they call “whataboutism.” It’s a handy tactic they’ve embraced to counter conservatives who remind them of unseemly things their icons have done in the past, for which liberals conveniently look the other way. They want to talk about Donald Trump and Russian collusion, and we have the audacity to remind them of the hard evidence (a literal KGB memo) of what their “Lion of the Senate,” Ted Kennedy, did with the Russians, which they dutifully ignored throughout Kennedy’s life. They find one insulting albeit questionable statement from Ronald Reagan and they begin removing his name from buildings, while they ignore a litany of offensive remarks and actions from icons ranging from Woodrow Wilson to Margaret Sanger to Hillary Clinton. Heck, old Maggie gets a pass for speaking to the KKK in May 1926.

We bring up really offensive things that they dutifully ignore. We say, “well, what about this?” and they cry foul — at our reminders.

Well, too bad. Their ability to ignore the sins of their guys and gals is truly appalling, especially when they make mountains out of every molehill they try to uncover with Republicans.

Donald Trump’s situation with Joe and Hunter Biden and the Ukraine is merely the latest exhibit. Here again, we could give example after example of their favorite Democrat presidents abusing the powers of state. Pick your poison, progressives: FDR? Kennedy? LBJ?

Let’s go with LBJ today. As liberals dig furiously for evidence of an abuse of power by President Trump against a Democrat presidential rival, let’s hop into the time machine for a history lesson of what President Lyndon Baines Johnson did to Sen. Barry Goldwater in anticipation of the 1964 presidential race.

What LBJ did has not been bothered with by liberal journalists or historians, whose job is to ignore those transgressions. The few sources to address LBJ’s Goldwater malfeasance have been conservative ones. That’s all the more reason for liberals to quit reading now and cover their eyes.

Most recently, LBJ’s shenanigans against Goldwater were addressed in Mark Levin’s new book, Unfreedom of the Press. In turn, Levin has mentioned it on his radio show. Prior to Levin, one needs to go back a decade to the work of conservative historian Lee Edwards. A longtime professor at Catholic University of America and scholar in residence at the Heritage Foundation, Edwards wrote the first biography of Ronald Reagan, way back in 1967 — Reagan’s first year as governor. Prior to that, Edwards worked on the Goldwater campaign and was a firsthand witness to what was going on. He became one of the first biographers of Goldwater. And before Edwards’ reporting on LBJ’s mischief (beginning over a decade ago), Barry Goldwater himself alluded to it in his 1988 memoir — though it was Edwards who most extensively uncovered and detailed what happened.

So, what did LBJ do?

Edwards wrote a piece in June 2005 titled “Lyndon Johnson’s Watergate,” posted at the website of the Heritage Foundation, long before anyone could conceive the words “President Donald Trump.” There he wrote,

It was a political scandal of unprecedented proportions: the deliberate, systematic, and illegal misuse of the FBI and the CIA by the White House in a presidential campaign. The massive black-bag operations, bordering on the unconstitutional and therefore calling for impeachment, were personally approved by the president. They included planting a CIA spy in his opponent’s campaign committee, wiretaps on his opponent’s top political aides, illegal FBI checks, and the bugging of his opponent’s campaign airplane.

The president? Lyndon B. Johnson. The target? Senator Barry Goldwater of Arizona, the 1964 Republican presidential candidate.

Edwards laid out three specific examples of what he called a “presidential abuse of power for political purposes that constitute an even graver offense than Watergate.”

To wit: Edwards says that it was in the fall of 1964 that the LBJ White House turned to its CIA to procure inside information on the Goldwater campaign. The LBJ team did so with no legal justification whatsoever. As Edwards notes, Sen. Goldwater could hardly be described as a “domestic enemy,” which would be the only valid reason for the agency to pursue such action. No less than E. Howard Hunt, later of Watergate infamy, and convicted for his part in the Watergate break-in, told a congressional committee that he had been ordered by the White House to spy on Goldwater’s campaign headquarters.

Importantly, this White House effort was headed by LBJ himself, who, said Hunt emphatically, “had ordered this activity.” The “recipient of the information,” according to Hunt, would be White House aide Chester L. Cooper. This was confirmed by William Colby, the head of the CIA, who conceded that Cooper had prepared campaign material for President Johnson and had in fact obtained advance texts of Goldwater speeches. Cooper obtained them through what Colby identified as only a “woman secretary,” presumably planted by the agency inside the Goldwater campaign. This information was picked up and used by the LBJ reelection campaign against Goldwater. Lee Edwards wrote,

The Democrats constantly used the covertly obtained information to undercut Goldwater initiatives. In early September, for example, the Goldwater campaign announced the formation of a Task Force on Peace and Freedom that the AP described as one of the most “unusual tactics in the history of American politics.” Three hours before the Goldwater task force was unveiled, the White House announced that President Johnson had created a 16-member panel of leading authorities to consult with him on international problems. The White House announcement trumped the Goldwater plan. Democratic campaign speechwriter John Roche revealed that he and his colleagues got advance texts of Goldwater’s major speeches. “When I innocently inquired how we got them,” Roche said, “the reply was ‘don’t ask.’ ”

Beyond plants and pilfering of information, Edwards adds that Sen. Goldwater’s regional political directors were convinced that the telephones of the Republican national headquarters in Washington were bugged. Edwards gives examples of how that information was quickly used by the Johnson White House. Particularly disturbing, the FBI actually bugged the Goldwater campaign plane, where the Arizona senator and his inner circle often made their most confidential decisions. Edwards states that this illegal surveillance action by the FBI was confirmed by Robert Mardian, who would become an assistant attorney general to President Nixon.

Mardian learned of this during a two-hour conversation with none other than legendary FBI director J. Edgar Hoover in early 1971. Hoover told Mardian that in 1964 his FBI, on direct orders from the Oval Office, had bugged the Goldwater plane. “You do what the president of the United States orders you to do,” shrugged Hoover of LBJ’s edict. Mardian got further attestation from William C. Sullivan, Hoover’s chief lieutenant at the FBI.

These facts were reported by Lee Edwards back in 2005. (I’m merely sharing what he already reported.) He then reported again in a May 2018 piece for the Wall Street Journal. He there added that Johnson had also illegally ordered the FBI to conduct security checks of Goldwater’s Senate staff. Edwards reported that Cartha “Deke” DeLoach, the FBI’s liaison with the White House and a top aide to J. Edgar Hoover, had denied during a 1975 congressional hearing that the bureau had investigated Goldwater’s staff. Edwards learned that those denials were not truthful. Through the Freedom of Information Act, Edwards obtained copies of FBI memoranda that documented an “illegal file check” by the FBI of 15 Senate staffers. One memo that bore DeLoach’s initials reported that “no derogatory information was located concerning” any of the people in Goldwater’s Senate office.

In his piece for the Wall Street Journal, Edwards circled back to the role of E. Howard Hunt. He said that Hunt in 1973 told a Senate committee that his CIA superior had ordered him to infiltrate the Goldwater campaign. When Hunt claimed to have questioned the order, he was informed that this was a personal order of President Johnson and that the information he recovered would be delivered to a White House aide.

Talk about a Deep State colluding with a president. Here it was in spades.

Of course, LBJ would go on to crush Goldwater in November 1964 in one of the most overwhelming presidential landslides in history. Polls had forecast an easy LBJ victory for months. Goldwater, too, expected it. Still, Lyndon Baines Johnson, an abusive man, clearly abused his presidential powers. Liberals ignored it then and still look the other way to this day. I’ve had conversations with liberals about LBJ’s antics that elicited from them a wink and a smile, as if LBJ was their lovable rogue.

Naturally, they weren’t winking or grinning when LBJ’s successor was a Republican. Ignoring every one of LBJ’s exploits, on a dime they angrily pursued the scalp of the next president — a Republican — Richard Nixon. As for any Republicans reminders of what LBJ had done just a few years earlier, liberals could shrug those off as whataboutism.

Aside from Lee Edwards’ reporting, Barry Goldwater himself alluded to LBJ’s sleazy behavior in his 1988 memoir published by Doubleday.

Goldwater acknowledged the “penetration” by the LBJ sources and wondered who was “supplying information to the White House.” “We were witnessing some of the reasons why I never wanted to run against LBJ from the beginning,” Goldwater wrote. “They went to the very core of the man, his basic character.” He noted how Johnson enjoyed telling people that he had “come to Congress as a $6,000-a-year, dirt-poor Texas schoolteacher,” only to “boast that he had become a multimillionaire.” Goldwater noted that for the 1964 campaign LBJ would use “every federal department and agency to help guarantee a landslide victory. Government was his political action committee, his slush fund, his firepower, his troops.”

Yes, government was LBJ’s political action committee, and so was the liberal media. So is, always, the Democrat media.

In fact, that’s the timely thesis of Mark Levin’s book.

In 2019, Levin prophetically called attention to Edwards’ reporting in his Unfreedom of the Press, a runaway bestseller atop the New York Times list — in other words, a book awful hard to claim ignorance of. Liberals, however, have an uncanny ability to make themselves ignorant to the point of stupefied silence when it comes to reporting information that incriminates their Democrat buddies.

And so, here we are again. It’s 2019, with the 2020 campaign around the corner, and liberals and their press (what Levin calls the “Democratic-Party Press”) again mount their high moral horse in another righteous crusade against abuses of power in the White House. So long as that abuser is a Republican.

We can shout “well, what about … ?” until we’re blue in the face. They don’t care. There’s a Republican in the White House, after all.

Paul Kengor
Follow Their Stories:
View More
Paul Kengor is professor of political science at Grove City College in Grove City, Pa., and senior academic fellow at the Center for Vision & Values. Dr. Kengor is author of over a dozen books, including A Pope and a President: John Paul II, Ronald Reagan, and the Extraordinary Untold Story of the 20th Century, The Politically Incorrect Guide to Communism, and Dupes: How America’s Adversaries Have Manipulated Progressives for a Century.
Most Popular
1
The Right Prescription
Vaccination Rollout: Red States Outpace Blue States
by David Catron