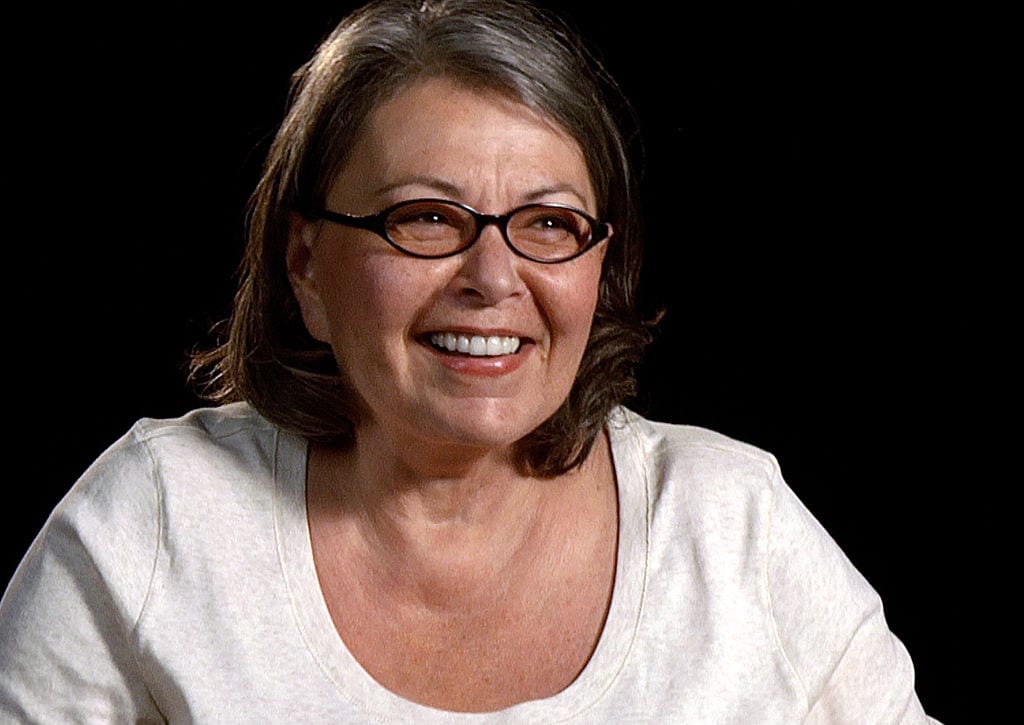 Don’t be too shocked at this, but Roseanne Barr said something intolerable and got her highly-rated ABC sitcom canceled before its second season could go into production. The decision to dump her show came within mere hours after the statement.

Barr, on Twitter where her various pronouncements constantly get her in trouble (she makes Donald Trump’s short communiqués appear positively Machiavellian in their strategic depth), Monday made the analogy of former Barack Obama political guru Valerie Jarrett as a cross between the Muslim Brotherhood and the Planet of the Apes.

This was immediately taken as a racist remark, as Jarrett is of an African ethnic background (she was raised in Iran, but her father was a black doctor from Chicago). It probably came less from a place of racism than the perceived resemblance between Jarrett and the Planet of the Apes character of Dr. Zira, played by Kim Hunter in the 1967-73 original trilogy. Jarrett’s Muslim Brotherhood connections are less a matter of perception; Judicial Watch revealed it had uncovered documentation to that effect in 2015.

Not that it matters. It’s long been known that comparing black people to apes of any kind is the most bright-line of offensive statements and won’t be tolerated among polite company in America. You don’t have to be politically correct to recognize the explosive nature of such a statement, and the fact Barr was so sloppy as to blow through such guardrails alone is a good indication ABC probably made the right call in running for the hills.

It isn’t like Roseanne Barr wasn’t a rickety wagon to begin with. She’s categorically insane and has been for quite some time. What’s more, Roseanne Barr is anything but the middle class conservative icon the promoters of her show’s reboot billed her as in advance of its return to ABC’s lineup of shows this spring. She’s every bit the leftist the rest of Hollywood is; she’s just trashier and less pretentious. That the characters on the show were Trump supporters doesn’t mean much; if anything that fact gave license to the show’s producers to use them as figures of ridicule. Barr has made a career out of portraying herself that way; why Trump supporters would appreciate being identified with one of the least desirable, most lowbrow acts on television is something your author never could understand.

So good riddance to Roseanne Barr and let’s not expend much energy in making a martyr of her in our current culture war.

Which shouldn’t be taken as a validation of ABC or Disney, its parent company.

ABC/Disney is the outfit which has virtually destroyed ESPN, once thought unbreakable, by alienating millions of its viewers at the very time those viewers are discovering options beyond paying for expensive cable TV subscriptions in order to see sports programming. ABC/Disney was the company that rewarded Bruce Jenner’s mental illness by celebrating his decision to appear in public as a woman as somehow a courageous one. It has embarked on a ceaseless crusade to canonize a less-than-mediocre NFL quarterback in Colin Kaepernick, who made an unwise decision to walk away from a contract with the San Francisco 49ers after a 2-14 season in which he spent more Sundays than not disrespecting the American flag and — shockingly! — found that NFL owners weren’t keen to give him a second chance at football millions.

And ABC/Disney just hired unhinged troglodyte Keith Olbermann, whose bigoted and offensive remarks are legion and have been for the better part of two decades, as an on-air personality. Coming on the heels of a pair of embarrassing controversies about statements made on air at ABC/Disney properties, most notably Joy Behar’s mockery of Christians on ABC’s The View and ESPN host Jemele Hill’s characterizations of President Trump as a white supremacist, the Olbermann hiring can hardly sit well.

And let’s not forget what Disney has done to the Star Wars franchise, which is hemorrhaging fans as it commits to a full-on social justice warrior bent that completely perverts the storylines that made it worthy of attention.

Roseanne Barr’s reboot gave ABC a #1 hit show for the first time in a quarter century. That’s less a testimony to Barr’s worth than it is to the unmistakable signal the market was attempting to send that content not offensive to half the viewing audience is in grievously short supply, and that it is to the willing refusal of ABC/Disney’s corporate masters to answer that signal in a serious way. They threw Roseanne Barr into that void after pulling Tim Allen’s show, also highly rated despite zero network support, off the air likely for political reasons. Not to mention the shame of Curt Schilling’s fate at ESPN.

Sure, boycott ABC/Disney. But not in response to what it did to Roseanne Barr. You should have been boycotting ABC/Disney a long time before her abortive return.

Over the past decade, merely the increase — I repeat, just the increase — in US oil and gas production is equal to seven times the total energy production of every wind turbine and solar project in the United States.

That’s from a New York Post column by Robert Bryce two weeks ago on the devastation the real world is inflicting on the climate change crowd.

At some point I’m going to have to do a column in this space dedicated to the complete boondoggle that is the Wind-Catcher project in Oklahoma, which a public utility named SWEPCO, whose parent company is the utility giant AEP, is attempting to foist on ratepayers in Oklahoma, Arkansas, and Louisiana. It’s a product of a pension fund manager in New York who is heavily invested in AEP stock and is attempting to use that position as leverage to force bad investments in “renewables.”Utility regulators in those states appear a bit less sanguine about such pie-in-the-sky strategies so far. But it’s a developing story deserving of a full treatment in a later entry on this page.

Did you hear about that awful jihadist attack in Belgium? A Muslim convert fresh out of prison stalked a pair of female police officers in the town of Liège, came at them with a box-cutter as they walked into a café, stabbed them both, took their guns and shot both dead, then shot a man sitting in the passenger seat of a parked car, then went to a nearby school and took a janitor hostage before the police arrived in force and a shootout commenced which resulted in his shooting four more police officers. Thankfully the cops shot back and killed him.

What that episode says about Europe and its current state isn’t good. European countries are awash in unassimilated Muslim immigrants, who are filling the prisons and using them to convert the dregs of society into the jihad. Their immigration policies were built on a political purpose; namely importing an electorate which would facilitate a more rapid process of installing socialism — but things have progressed quite far beyond the control of the leftist parties which crafted those policies.

And now, from ISIS cells in Belgium to German rape gangs to runaway kidnapping and child prostitution in the UK — which apparently cannot be reported on there without the risk of jail — the entire continent appears helpless to beat back the invading horde.

Go see Europe this summer. If you wait too long you’ll miss your chance.

David Hogg’s mother and father are the ones who really deserve your approbation. Anyone who would allow David Brock and his putrid Media Matters minions to set their hooks in an attention-starved teenager and pump him up into the most divisive figure in political advocacy before he’s had so much as his first legal sip of whiskey is an uncommonly poor parent.

Our side should stop demonizing Hogg, who is indeed terrible, and start demanding accountability for the choices his parents have made in allowing him to be inflicted on us.

Tom Steyer isn’t a Republican plant inside the Democrat Party, is he? If not, he’s completely eliminated the need for one. Steyer’s money is driving the Democrats right out of contention in this fall’s midterms, which is a development the legacy media has paid virtually zero attention to.

And on that happy note, we will cease… until our next entry later this week.