The Nation’s Pulse,Top Story Coronavirus,COVID-19 Response,Mainstream Media A Journal of the Plague Year - The American Spectator | USA News and Politics
Menu
The Nation’s Pulse
A Journal of the Plague Year
Major entries in the story of the 21st century: Trump hatred, coronavirus, and the partisanship of the press.
by Lou Aguilar
Trump speaks at daily coronavirus press briefing, Sunday, March 22, 2020 (Tia Dufour/Official White House Photo) 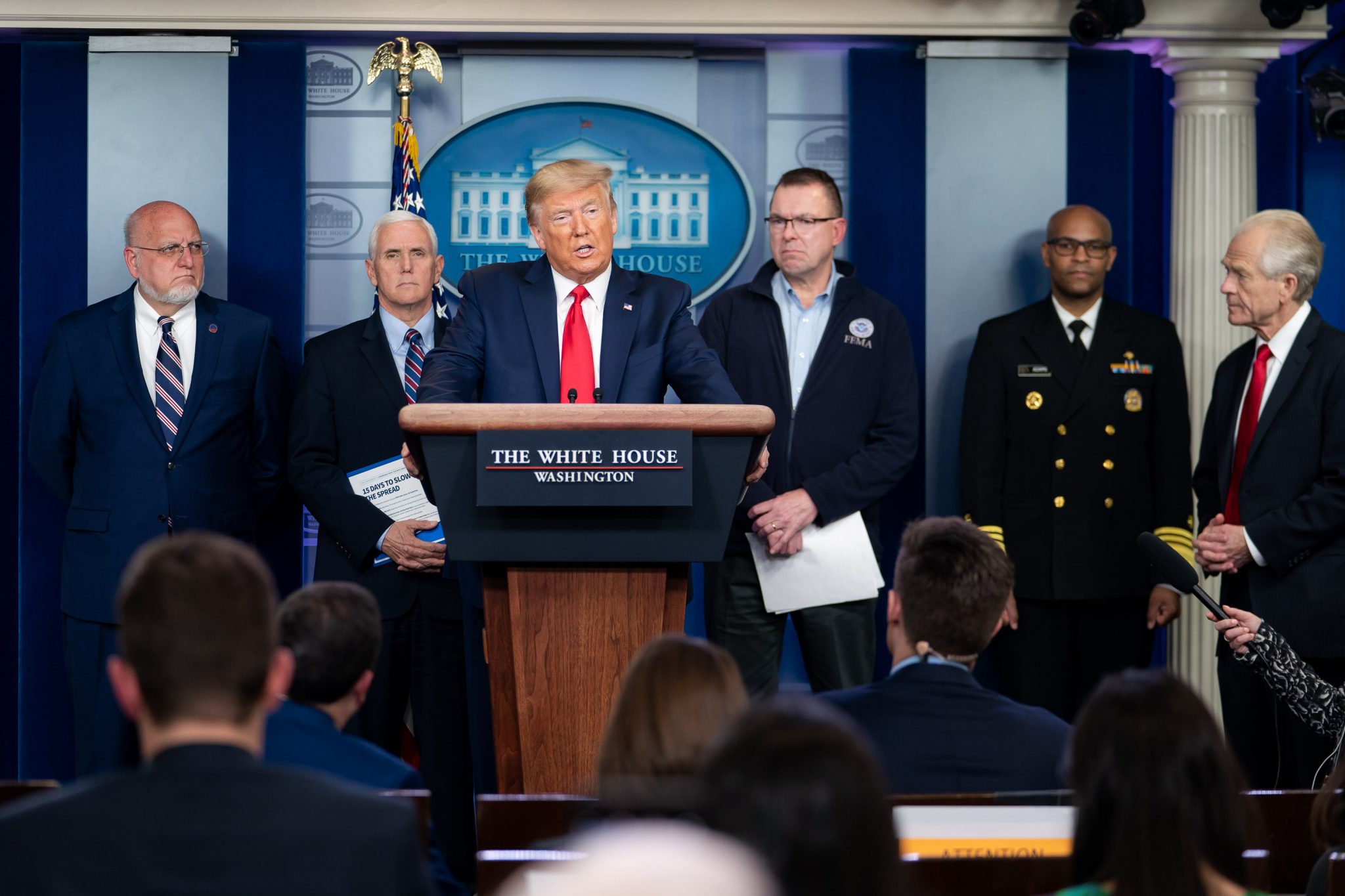 While watching Donald Trump’s coronavirus press briefing last Saturday, my 92-year-old stepfather, Juan, made a curious observation. “The 21st century started this year,” he said. Juan has lived through many of the conflicts in modern history: World War II, the Cold War (he was in Havana at its deadliest point, the Cuban Missile Crisis), the Civil Rights struggle, the War on Terror, and the current war against a global pandemic. He heard Franklin Roosevelt live on the radio say, “Yesterday, December 7, 1941, a date which will live in infamy.” Watched Martin Luther King state, “I have a dream.” Watched Ronald Reagan declare, “Mr. Gorbachev, tear down this wall!” Watched George W. Bush on a bullhorn at Ground Zero vow, “I can hear you. The rest of the world can hear you. And the people who knocked these buildings down will hear all of us soon.” But there are two clashes Juan had not witnessed in all his years. One is every nation on planet Earth, friend and foe alike, uniting against an inhuman foe. Another is the unbridled hostility of the free press toward a commander-in-chief contending with this existential crisis.

After Trump and his team spent over an hour describing the massive efforts to supply every medical facility in the country with vital masks and ventilators, a reporter cited several doctors’ complaints about the lack of masks and then issued his smarmy challenge: “Given that this is one of the wealthiest, most powerful countries in the world, should this even be happening? Shouldn’t this have been resolved weeks ago?” The president unflappably explained that the response structure he inherited from previous administrations was worthless in such a monstrous emergency, so his team had to start from scratch.

Trump’s masterful jujitsu in turning the journalists’ attack on him into a criticism of their beloved Barack Obama only fuels their hatred, more so by exposing their hackery. Because Trump’s daily press briefings have calmed the public and skyrocketed his approval ratings, prominent press figures are actually demanding that news sources stop showing them.

Because Trump’s daily press briefings have calmed the public and skyrocketed his approval ratings, prominent press figures are actually demanding that news sources stop showing them.

MSNBC hostess Rachel Maddow tweeted, “If Trump is going to keep lying like he has every day on stuff this important, we should, all of us, stop broadcasting it. Honestly, it’s going to cost lives.” New York Times columnist Charles Blow concurred in his tweet, “These Trump disinformation press conferences are at best worthless, and at worst a threat to public health.” On Tuesday, the Seattle PBS station said it would discontinue carrying the Trump press briefings because of their “pattern of false and misleading information.” Never mind the constant presence of one or more top epidemiologists such as Dr. Anthony Fauci and Dr. Deborah Birx answering reporters’ questions.

The way journalism is supposed to work is the president does or announces something, and the press covers it then subsequently analyzes it. Not until today has the analysis sought to supplant the coverage, because it’s politically benefiting the president. Benefiting the country apparently counts less, and only making money counts more. The White House coronavirus press conferences are earning spectacular ratings, with 12.2 million viewers on Monday. So while many CNN and NBC staffers are reportedly angry at their networks for carrying Trump’s pressers, their bosses have so far overruled them.

Very soon Donald Trump will have to make the toughest choice of any president in Juan’s lifetime, with the possible exception of Harry Truman over dropping the atomic bomb on Japan. Either choice will have mortal consequences: lose incalculable lives either to a foul disease or to a dead economy. Journalists seem to know which will be the wrong choice — whichever one Trump makes.

In an incredible moment at Wednesday’s press briefing, the president got lectured by a White House reporter as a prelude to an insult. “The key to getting this economy open as soon as possible is to test everyone who needs testing so we can quarantine all infected individuals and allow everyone else to go back to work immediately,” said the unidentified man, just before firing his shot. “Would you subscribe to that strategy? And if not, how many deaths are acceptable?” As usual, Trump’s jujitsu flattened the reporter. “How many? None,” he said. “If that’s your question.”

Pre-Trump, press members could maintain their façade of objectivity and fool much of the public. They’d never encountered a Republican leader so impervious to their superior little blows and so capable of returning their contempt in spades. The more Trump punched back, the more their masks slipped to reveal the fanatical rage underneath. Now they make no secret of their disgust toward conservatives and the horse they rode in on — President Trump. But even my stepfather, with all he has seen, is shocked.