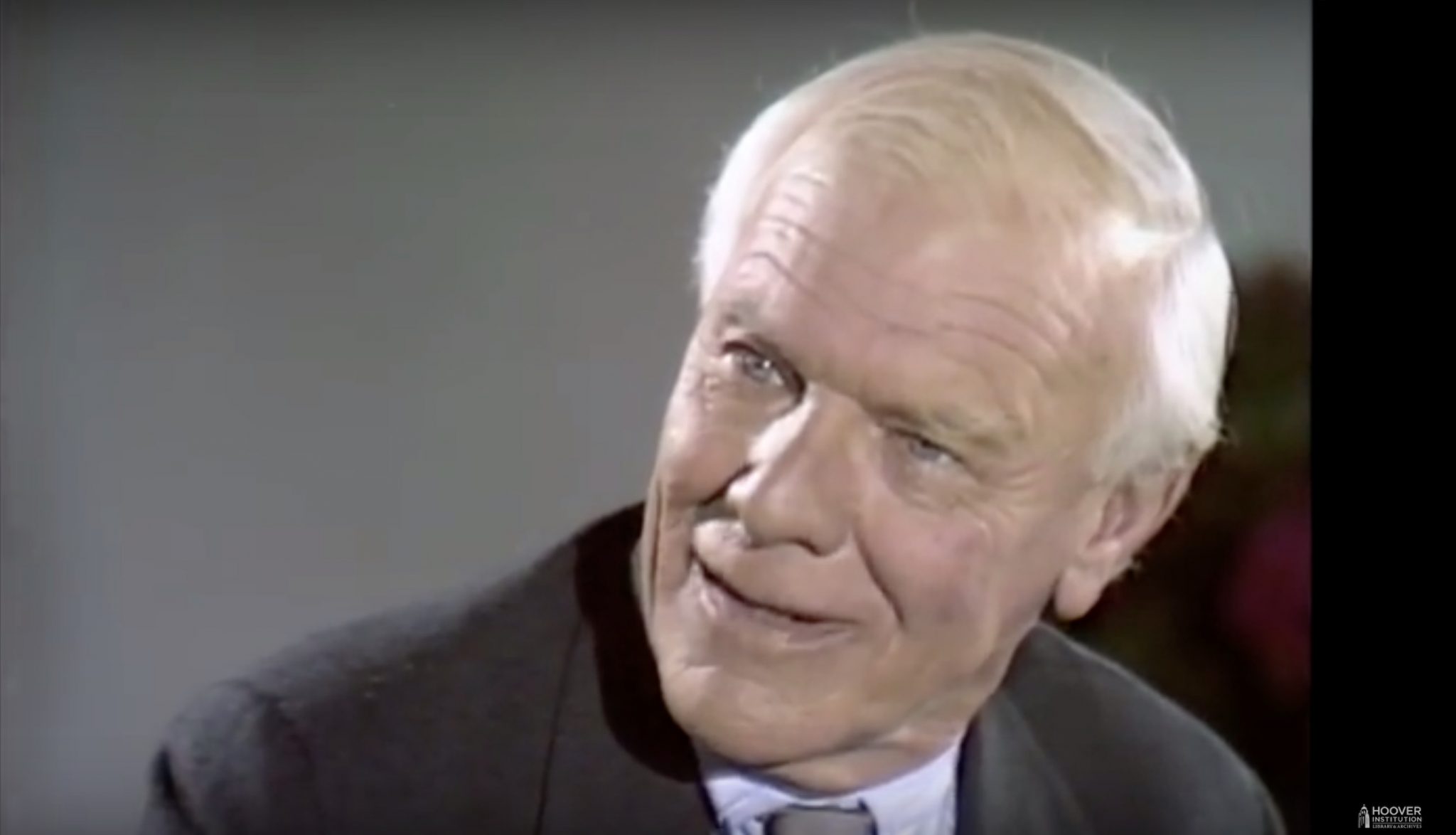 One of my favorite authors is the late British journalist, intellectual, and cultural critic Malcolm Muggeridge. I was reminded of Muggeridge as I followed competing Iranian protest reports on Twitter a few weeks ago. One narrative claiming that it was much ado about nothing or that it was Trump’s fault; the other, the factual one, that it was a spontaneous revolt of a segment of the Iranian population against a brutal, lying regime. Each narrative claimed exclusive ownership of the truth and denounced the other as utterly false. None of this is particularly new.

Born at the dawn of the 20th century, Muggeridge was, at various stages of his life, an atheist, a Marxist, a womanizer, a Member of Parliament, a journalist, a spy, a staunch anti-communist, and a Christian apologist. While he is best remembered by his fellow Britons for his television documentaries and his unmistakable lilt, Muggeridge deserves to be remembered for a much more significant reason.

Seduced by the communist promise of earthly bliss, Muggeridge and his pregnant wife, Kitty, moved to Moscow in 1932. The rumors that Stalinist Russia was anything but a “workers’ paradise” did not dampen their spirits in the least. Shaking the dust of London and the West off of their shoes, they were full of high ideals and naïve optimism upon arrival in the USSR. Muggeridge, working as a correspondent for the prestigious British daily The Manchester Guardian, quickly earned a name for himself among the Moscow bosses as a supporter of the regime. His reports were rapturous tributes to the wonders of Soviet government, economics, agriculture, and arts.

Yet even as he wrote of a communist utopia, Muggeridge was beginning to have doubts — doubts about the veracity of the information the Soviet government spoon-fed the foreign press and which it, in turn, passed on to a naïve Western public. He was also beginning to rethink his understanding of human nature. Foreign journalists working in Stalin’s Russia operated according to the strict dictates of the government — interviews were scripted, travel was restricted, and reports were censored. All the while, the secret police eavesdropped on their conversations, read their mail, noted their associations, and followed their every move. Any journalist who was deemed to be subversive faced, at the very least, harassment and immediate deportation. Consequently, many newsmen, preferring a comfortable existence to disgrace and unemployment, sacrificed journalistic integrity in favor of an amicable agreement with the regime.

According to these rules, journalists would post to their Western editors news items that cast the USSR in a favorable light. In return, the Soviet government would allow them to remain in the country to live a comfortable existence, supplying their guests with such creature comforts as caviar, vodka, and mistresses. Muggeridge was quick to sample any delights offered and, initially, he willingly passed along Soviet propaganda, not the least because he was ideologically predisposed to believe it. Nevertheless, the signs of terror and human degradation steadily gnawed at his conscience. Even the seemingly omnipresent NKVD (the predecessor to the KGB) could not hide all of the starving people or quell all of the stories of genocide. Some rumors had it that in the countryside, where no foreigner was permitted without advance application and escort, millions had died.

Risking both his career and his life, Muggeridge ignored travel restrictions, escaped his NKVD handlers, and headed for Ukraine, where conditions were said to be worst of all. What he found there horrified him. Whole villages, whose grain had been seized by the government and sold abroad for hard currency, were left to starve and cannibalize one another. Those who resisted were liquidated or deported to one of the innumerable camps that dotted the vast Siberian landscape. Jarred from his moral and intellectual slumber, Muggeridge quickly abandoned his communist views and began writing an exposé on the government-induced famine. The articles were smuggled out of the country through intermediaries to be published in The Manchester Guardian. Following Muggeridge’s example, Gareth Jones, another British journalist, outlined his observations of the famine in the London Times. Together, their stories caused an international firestorm of debate. Most regarded the reports as scurrilous and unjustified. The Soviet leadership denied the stories while the journalistic establishment denounced Muggeridge and Jones as liars. Among their accusers was Walter Duranty, the famed correspondent of the New York Times, who assured his readers that people in Ukraine were merely “hungry.”

Muggeridge even drew fire from playwright George Bernard Shaw, who, the previous year, had accepted a high-profile invitation from Josef Stalin to tour the Soviet Union. A man of strong socialist sympathies, Shaw was lavished with attention and praise during his visit. His tour was carefully orchestrated to include only what authorities wanted him to see. Still, evidence of a Stalinist terror was so widespread that the reality of Soviet policy could not be hidden entirely. But Shaw simply ignored the suffering, returned to Britain and dismissed reports of widespread famine as malicious lies. Moreover, Shaw (bizarrely) declared Stalin’s Russia to be an example of “what would happen if [Christ] lived now.” (In his classic critique of communism, Animal Farm, George Orwell modeled buffoonish Mr. Whymper on Shaw.)

Sadly, it was Duranty and Shaw who won the battle for public opinion. The wicked prospered further still in the years that followed. Duranty was awarded a Pulitzer Prize for his (deliberately false) reporting on the famine, and Shaw, who had already been honored with a Nobel Prize for Literature, would go on to receive an Academy Award for Pygmalion. Meanwhile, Muggeridge became a journalistic pariah, while Gareth Jones was kidnapped and murdered under mysterious circumstances during a fact-finding mission in China. Many, former Prime Minister David Lloyd George among them, believed that Jones had been assassinated by the NKVD for his embarrassing reporting on the Soviet Union, but nothing was ever proved.

Why did these men offer such different interpretations of the same events, one a baseless lie and the other factual and evidential?

False reporting isn’t new. The Philadelphia Aurora, a scurrilous newspaper which consistently attacked America’s Founding Fathers during its short run from 1794 to 1824, is an early example of this, but hardly the last. (In a May 18, 2019, column for CNN, another Pulitzer Prize winner, Diane McWhorter, predictably attacked Alabama as racist for its pro-life stance. Much to my amusement, McWhorter is pictured, presumably in her office, with her back to a bookshelf where one sees a copy of Richard Rosenfeld’s American Aurora, a book of dubious scholarship in which the author attempted, unsuccessfully, to rehabilitate the reputation of The Philadelphia Aurora.) Indeed, in addition to Duranty, we may add the New York Times’ Jayson Blair, 60 Minutes’ Dan Rather, the Washington Post’s Bob Woodward, and now, it seems, an entire political party is collaborating with a willing media to fabricate from whole cloth Russia collusion narratives, expose William Barr’s supposed dark political machinations with Opus Dei, and posthumously characterize Iranian terrorist Qassem Soleimani as a poet and man of the people.

So, again I ask, how do we account for this phenomenon?

First, for much of his career, Malcolm Muggeridge was a champion of the Left, but he was also intellectually honest. Rather than beginning with a conclusion that fit his ideological commitments and working back from it as Duranty, Shaw, and others had done (and many continue to do), discarding all evidence to the contrary, Muggeridge followed the evidence wherever it led him. For someone like Duranty (or Pelosi), facts are used selectively to accessorize a political agenda, not to determine if that political agenda is right or wrong.

Second, but equally important, are assumptions about God and human nature. Shaw, an atheist and thus lacking a theology of evil or a sense if man’s intrinsic value, believed the majority of humanity to be basically good. But just as some are born with physical defects, some, too, are born with moral imperfections. Secure in this conviction, Shaw judged it the task of society to identify and eradicate those few elements that were flawed. He saw no need for prisons or rehabilitation programs. If a man is bad, he is bad and must be eliminated. Stalin, Shaw acknowledged, was killing people, but this was for the greater good of society. “It’s not a question of to kill or not to kill,” he said. “It’s a question of killing the right people.”

By contrast, Muggeridge, following the evidence, arrived at an opposite conclusion. Once of Shaw’s ideological persuasion, he left his native Britain to find paradise, but instead found only greater evidence of man’s penchant for evil. He witnessed a government’s deliberate and systematic annihilation of its people, neighbor cannibalizing neighbor, graft, greed, and state-sponsored lies peddled as truth, and it changed him. No longer did he nurse illusions of heaven on earth. On the contrary, he was cynical and hopeless. Then one Sunday while still in Ukraine, he made the uncharacteristic decision to attend a church service. The place was packed with people from every walk of life. Muggeridge was moved:

Never before or since have I participated in such worship. The sense conveyed of turning to God in great affliction was overpowering.… In their minds, I knew, as in mine, was a picture of those desolate abandoned villages, of the hunger and the hopelessness, of the cattle trucks being loaded with humans in the dawn light. Where were they to turn for help? … Every human agency was found wanting. So only God remained, and to God they turned with a passion, a dedication, a humility, impossible to convey.

Muggeridge eventually turned to God, too. Experience had shown him, as Aleksandr Solzhenitsyn put it, that “The line between good and evil runs through every human heart.” An encounter with Jesus Christ offered transformation through God’s grace. Just as Shaw’s erroneous belief in the fundamental goodness of man had, paradoxically, bred in him a cruel and pitiless regard for human misery, Muggeridge’s discovery that man is morally bankrupt without God, produced compassion. And that compassion, once stirred, led him to find and make known to the world a tireless woman working in obscurity in Calcutta: Mother Teresa. His book Something Beautiful for God made her both an inspiration and a model for humanitarian efforts.

Over 70 years later, history has shown that Muggeridge was unquestionably right about the famine, communism, and the Soviet Union, yet he was never publicly vindicated. Duranty and Shaw, however, continue to enjoy a posthumous celebrity. In 2003, the Pulitzer Prize Board rejected requests to revoke Duranty’s Prize. Shaw’s popularity as an English playwright ranks only behind Shakespeare. And Muggeridge, with hope rekindled, became one of the 20th century’s most articulate voices in defense of the Christian faith, placing him alongside other notables like Chesterton and Lewis.