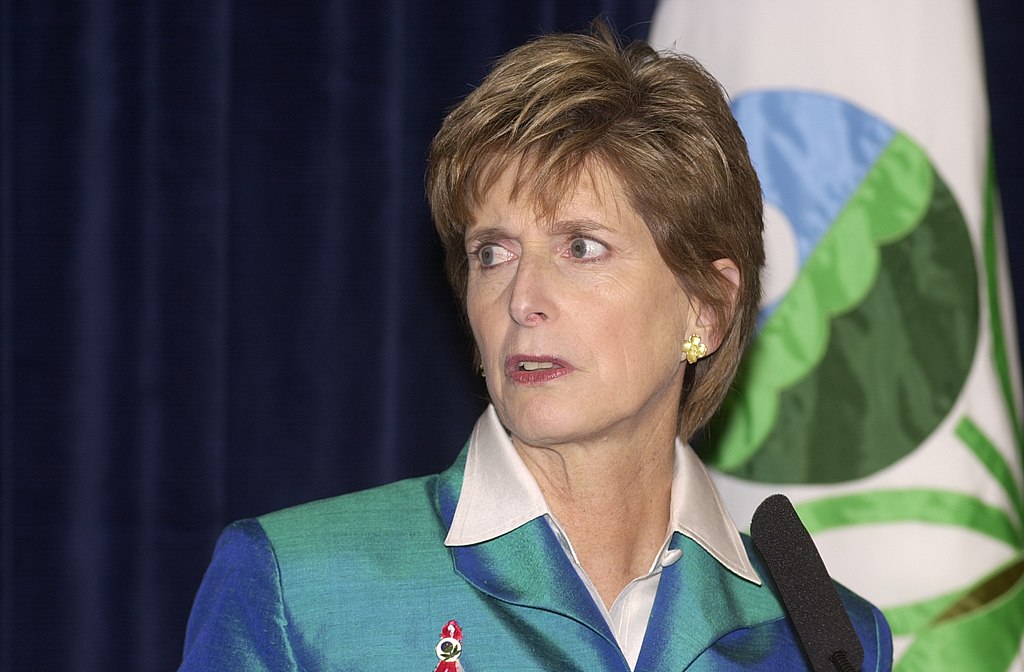 Over there on the New York Times Op-Ed page this fine new week is this headline:

We Are Republicans With a Plea: Elect Democrats in 2022

The article, co-authored by Miles Taylor and Christine Todd Whitman, he the disaffected ex-Trump staffer at the Department of Homeland Security and she the ex-GOP Governor of New Jersey and Bush 43 EPA administrator, announces the formation of something called the Renew America Movement. A trip to the Renew website and sure enough, there is a small collection of Never Trumpers and Trump Haters from Utah’s Evan McMullin to one-time GOP Chairman Michael Steele to others.

Among other things, the Taylor-Whitman article says this, with bold print supplied:

After Donald Trump’s defeat, there was a measure of hope among Republicans who opposed him that control of the G.O.P. would be up for grabs, and that conservative pragmatists could take back the party. But it’s become obvious that political extremists maintain a viselike grip on the national G.O.P., the state parties and the process for fielding and championing House and Senate candidates in next year’s elections.

Rational Republicans are losing the G.O.P. civil war. And the only near-term way to battle pro-Trump extremists is for all of us to team up on key races and overarching political goals with our longtime political opponents: the Democratic Party.”

Trump and his supporters are “political extremists”? Hmmm. Where have we heard this before? As I have repeatedly noted in the past, let’s recall yet again these warnings in the day from Establishment Republicans — about Ronald Reagan.

In other words, there’s nothing new here with this alarmism about “political extremism” from GOP Establishment figures about a conservative outsider and his supporters having the nerve — the nerve! — to invade what they see as their private club.

At the level of principle, rhetorically and in Opposition, it opposed these (left-wing Labour Party doctrines of planning, regulation, controls and subsidies) … and preached the gospel of free enterprise with very little qualification. Almost every post-war Tory victory had been won on slogans such as ‘Britain Strong and Free’ or ‘Set the People Free’. But in the fine print of policy, and especially in government, the Tory Party merely pitched camp in the long march to the left. It never tried seriously to reverse it. Privatization? The Carlisle State Pubs were sold off. Taxation? Regulation? Subsidies? If these were cut down at the start of a Tory government, they gradually crept up again as its life ebbed away. The welfare state? We boasted of spending more money than Labour, not of restoring people to independence and self-reliance. The result of this style of accommodationist politics, as my colleague Keith Joseph complained, was that post-war politics became a ‘socialist ratchet’ — Labour moved Britain towards more statism; the Tories stood pat; and the next Labour Government moved the country a little further left. The Tories loosened the corset of socialism; they never removed it.

Thatcher’s great friend, Ronald Reagan, understood the concept of the GOP Establishment and the “socialist ratchet” to his core. Here, famously, was then-former Governor Reagan speaking to CPAC in 1975 discussing the Republican Party:

Our people look for a cause to believe in. Is it a third party we need, or is it a new and revitalized second party, raising a banner of no pale pastels, but bold colors which make it unmistakably clear where we stand on all of the issues troubling the people?…

A political party cannot be all things to all people. It must represent certain fundamental beliefs which must not be compromised to political expediency, or simply to swell its numbers.

I do not believe I have proposed anything that is contrary to what has been considered Republican principle. It is at the same time the very basis of conservatism. It is time to reassert that principle and raise it to full view. And if there are those who cannot subscribe to these principles, then let them go their way.

In all the years since Reagan gave that 1975 speech — 46 years ago — nothing has changed with Establishment Republicans. The so-called “Renew America Movement” championed by Taylor, Whitman, and the rest is nothing but the latest version of the American “socialist ratchet.” With so-called “Republicans” — or as Reagan would and did call their political ancestors “pale pastel” Republicans — now demanding the GOP embrace the principles and policies of socialist Democrats with names like Senator Bernie Sanders and Congresswoman Alexandria Ocasio Cortez. Embrace them — but just a little less so.

The Renew America Movement is exactly the “socialist ratchet” in operation. And note well, the group not only lashes out about “lies about stolen elections,” it completely ignores, as I detailed last week in this space, that one election after another in my home state of Pennsylvania has resulted in indictments and convictions for documented voter fraud. There is not a single acknowledgement that there was serious voter fraud in the Pennsylvania elections of 2016, 2015, 2014, 2012, 2008, and 1994. The latter of which had a federal judge reversing a special State Senate election and giving it to the Republican because, said the judge as reported by the New York Times: “Philadelphia’s election system had collapsed under ‘a massive scheme’ by Democrats to steal a State Senate election in November….”

And yet there is Taylor and Whitman saying stolen elections are a lie.

The Really Big Lie — or as the Renewables call it the “conspiracy theory?” Quite frankly it is to insist — with massive evidence of voter fraud in one past election after another in the key state of Pennsylvania plainly documented with indictments and convictions — that it doesn’t exist. So they ignore it — completely disregarding the serious potential damage that could be done to the 2022 and 2024 elections.

There is nothing new either about Taylor and Whitman saying that “concerned conservatives must join forces with Democrats on the most essential near-term imperative: blocking Republican leaders from regaining control of the U.S. House of Representatives.”

All the way back there in 1980, liberal Republican Illinois Congressman John Anderson, defeated soundly by Reagan in the battle for the GOP nomination, pointedly declined to endorse Reagan and ran as a third party independent in a bid to drain GOP votes from Reagan and reelect Democrat Jimmy Carter. And as I’ve pointed out before, liberal Establishment Republicans like Michigan Governor George Romney — father of Mitt — flatly refused to endorse the 1964 GOP nominee, the conservative Arizona Senator Barry Goldwater, declining to appear on platforms with Goldwater when he campaigned in Michigan.

And oh yes. Let’s make clear. The fact these people not only supported Joe Biden in 2020 but are now asking Republicans to continue a Democrat Congress is, in blissful unawareness, to inadvertently admit they take responsibility for the catastrophe that is the Biden presidency. Thirteen dead Marines and a disastrous caving in Afghanistan to the terrorist Taliban? The utter chaos at the Southern border? The rise of gas prices and inflation eating away at the earnings of middle-class Americans? The Renew American Movement can proudly take credit for all of it.

To sum it all up? The Renew America Movement is nothing more than the umpteenth rejection of conservatives by Establishment Republicans. They stand for the socialist ratchet. They are the embodiment of what Reagan called the “pale pastel” Republicans.

Which is to say, there is nothing new with the Renew America Movement.

As Ronald Reagan might say with that twinkle in his eye: “There they go again.” And as Reagan also once said, since they can’t subscribe to conservative principle (and are now effectively championing the socialist ratchet) “then let them go their way.”