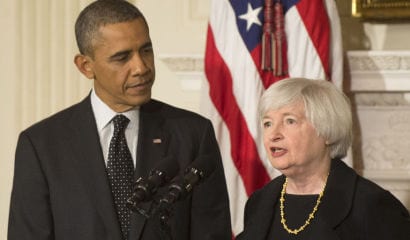 Chairman of the Federal Reserve is arguably the most important unelected office in America. It wields enormous influence over the financial health of the nation, and indeed the world. So it is incumbent upon members of the Senate Banking Committee, which could hold confirmation hearings before the end of November, to ask the right questions of the President’s Fed nominee, Janet Yellen. Professor Yellen is clearly qualified, having held the number two position at the Fed under current chairman Ben Bernanke, and has previously chaired the San Francisco Federal Reserve. What is in question is the direction she will take monetary policy during the next four years.

Monetary policy underlies so much of the nation’s financial health that lawmakers should see tough, but fair, questioning of a Fed Chair nominee as a basic duty to the American public. That’s why we, along with our colleague John Berlau, have compiled a set of questions that Senators should ask Federal Reserve Nominee Janet Yellen, published by the Competitive Enterprise Institute this week. Here are three questions we consider especially important to ask.

Q: Many observers expect you to pursue an inflationary stimulus, and believe this is likely a reason for your nomination. If your actions are already expected, will markets not take these expected price level changes into account in advance? If so, do you believe this would blunt the employment impact of any monetary expansion? Would you respond to these pre-existing expectations with an unexpectedly high inflationary policy?

A stable price system is fundamental to a healthy economy. Prices convey information that businesses and consumers use in decision making—in both the short and long term. Inaccurate prices yield misleading information, which can lead to bad economic decisions. Inflation, Milton Friedman observed, “is always and everywhere a monetary phenomenon.” It crippled America’s economy in the 1970s. Yellen needs to demonstrate a strong commitment to keeping inflation in check.

Q: Quantitative easing has involved large-scale purchase of assets such as Treasury bonds and mortgage-backed securities to increase the money supply — in other words, printing more money. Do you believe there is a sensible limit to this? What risks are associated with implementing this policy on so large a scale?

There has never been as much money in circulation as there is now, due in large part to actions by the Federal Reserve. In an effort to stimulate the economy, the Fed has engaged in multiple rounds of rapid money supply expansion under the artful term “quantitative easing.” It is important to know if Yellen intends to engage in further quantitative easing, as it could make inflation more likely.

Q: If quantitative easing increases the amount of money in circulation, higher capital reserve requirements, as under Basel III, would reduce it. How would you reconcile these contradictory effects?

International financial regulation is partly governed by a series of agreements named after the Swiss town of Basel, where the first such agreement was finalized in 1988. Each successive Basel agreement has attempted to solve perceived problems in the financial industry by introducing more complex regulations on the amount of capital banks should hold, but each new requirement has caused a different set of problems. The new Basel III standards for how much capital banks should keep in reserve are needlessly complicated and are unlikely to prevent further bank failures. Moreover, as Steve Hanke of Johns Hopkins University has argued, they are likely to counteract the intended effects of Quantitative Easing, by causing private money to dry up while public money expands. The Federal Reserve has committed to implement Basel III. Senators should ask Yellen about Basel III’s likely shortcomings and what she proposes to do about them.

Other questions Senators should consider asking for Professor Yellen include: how does she plan to reconcile the Fed’s “dual mandate” of controlling inflation and promoting employment, what she thinks about harmful Dodd-Frank rules like the Durbin amendment that limits fees banks can charge retailers for using credit cards, and how complex she believes financial regulation is likely to get. Getting satisfactory answers to these questions is crucial to know how Yellen will exercise her substantial influence over the nation’s economic health.

Finally, it is important that we know more about the financial health of this important and largely unaccountable agency. Transparency is essential for a public body that takes trillion dollar decisions. We need to know what she feels about the possibility of auditing the Fed. Indeed, Senator Rand Paul has alreadyannounced that he will place a hold on her nomination until he sees some progress with his Federal Reserve Transparency Act bill — something that Senate Majority Leader Reid used to support. If and when Professor Yellen does come before a confirmation hearing, Senators need to make her views on these questions transparent to the nation too.