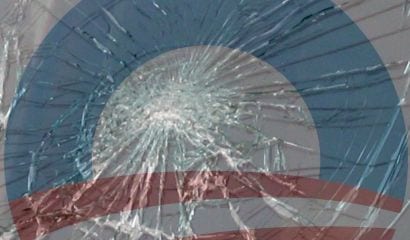 The Obama administration is beginning to resemble a damaged car windshield: A small ding from an unexpected flying pebble turns into a spider web of cracks, leaving the windshield difficult to see through and dangerously unstable.

Given the years of failure of both domestic and foreign policy, and the many real scandals born of this administration’s incompetence and corruption, it is a measure of the stubborn refusal of the mainstream media to behave as journalists that the first cracks have been caused by the rollout of the Obama administration’s proudest “achievement,” the Patient Protection and Affordable Care Act commonly known as Obamacare.

But where most windshields remain serviceable for months after the first chip, the façade of President Obama’s credibility is cracking up with stunning rapidity, even among some ardent “journalist” supporters and erstwhile human shields. Until Obamacare is either functioning well or substantially delayed or repealed (none of which is likely before the next election), the spreading web of cracks will make the administration’s efforts in any other policy area — and its ridiculous attempts to distract Americans from the disaster that is the Affordable Care Act — impossible to see. When the windshield is badly cracked, it is difficult to focus on anything but the cracks themselves.

If I may mix metaphors, reporters and the news organizations they work for are sharks, ever ready to gorge on a wounded potential meal. Unlike sharks, most of those who take up the profession of journalism preferentially smell conservative blood in the water. But at some point both the strength of the odor and the recognition that “if I don’t eat him, another shark will” overcome their inherent bias. And when enough join in, the feeding frenzy can be an awesome sight.

And so it comes to pass that on Tuesday morning, Lisa Myers of NBC News — a crew that has been one of the most eager propagandists for the Obama administration, with Ms. Myers herself calling the press one of Obama’s “most important constituencies” — publishes a devastating article entitled “Obama admin knew millions could not keep their health insurance.”

According to NBC, at least half, and perhaps as many as 80 percent, of Americans who buy their insurance through the individual market will have their policies canceled due to Obamacare. And, the administration knew that this would be the case throughout the past few years while the president was repeatedly assuringAmericans that “if you like your health plan, you will be able to keep your health plan.”

(I dealt with the left’s desperate retorts to NBC on these pagesyesterday.)

Also on Tuesday, on CBS This Morning, Jan Crawford reported that insurance companies are cancelling more than two million insurance policies in the several states from which they were able to get data. (Another analyst says that “Because the Obama administration’s regulations on grandfathering existing plans were so stringent as many as 16 million are not grandfathered and must comply with Obamacare at their next renewal.”)

With language that the administration only expects from Fox News, the CBS report was aggressively critical: “The White House is on the defensive, trying to explain how when the president said ‘If you like your doctor or your health care plan,’ he really didn’t mean it.”

Crawford’s report wasn’t a one-off: Just the day before, sheannounced that “For many, their introduction to the affordable care act has been negative. A broken website and now cancellation notices from insurance companies, followed by sticker shock over higher prices for the new plans. It’s directly at odds with repeated assurances from the president.”

It doesn’t help Obama’s credibility that just as he drew a red line regarding Syria and then claimed he didn’t, his propagandist-in-chief is now saying that “what the president said and what everybody said all along” was that there are existing plans which will not be permitted under Obamacare. Jay Carney had the gall to call such policies, which millions of Americans have researched and voluntarily purchased, “substandard.” Perhaps the administration should also ban “substandard” cars like Hyundai and Buick, and require everyone to buy Mercedes-Benz and Maserati.

The Chicago Sun-Times (the other Obama home-town paper to pile on the Obamacare disaster) reports a former Democratic congressional staffer’s buyer’s remorse: “I spent two years defending Obamacare. I had constituents scream at me, spit at me and call me names that I can’t put in print. The congressman was not re-elected in 2010 mainly because of the anti-Obamacare anger. When the congressman was not re-elected, I also (along with the rest of our staff) lost my job. I was upset that because of the health care issue, I didn’t have a job anymore but still defended Obamacare because it would make health care available to everyone at, what I assumed, would be an affordable price. I have now learned that I was wrong. Very wrong.”

As if Tuesday wasn’t already bad enough for Team Obama, CNNreported that “The Obama administration was given stark warnings just one month before launch that the federal healthcare site was not ready to go live, according to a confidential report obtained by CNN.” And later the same day, CNN also described how the Obama administration is trying to silence potential criticism from health insurance companies, noting that the companies warned the White House that Obamacare would necessarily cause the cancellation of many Americans’ insurance policies.

Even Politico, which has drifted steadily into stultifying run-of-the-mill liberal bias during its brief existence, is now beginning articles with anti-Obamacare snark: “Trying to sign up for Obamacare the old-fashioned way — paper, pen or telephone? Good luck with that.” Of course, those routes to use the federal exchange are only necessary because the “supposedly state-of-the-art $600 million HealthCare.gov portal [is still] malfunctioning.”

The sharks in the press pool smell the Obama administration’s blood in the water. Despite their inclination to defend a president and a law they so deeply support, no half-decent political reporter will want to be the only journalistic remora in the room who drifted by while everyone else gorged themselves on the historically spectacular collapse of a historically flawed and partisan piece of legislation — a description equally apt for the president whom the law is named for. And so White House Press Secretary Jay Carney watches the fins draw ever nearer.

But it’s not just reporters. Some of the most aggressively liberal media pundits are also now worried that without criticizing the too-obvious incompetence and failure of the administration, their “slobbering love affair” with the president may come back to hurt what little integrity they have left.

MSNBC’s Chris Matthews, the man who famously felt a “thrill going up my leg” when Barack Obama got elected, admitted on Tuesday that the “average person [feels] double-crossed by the president” and that the Obamacare fiasco — which is to say the impact of the law itself and not just the issues surrounding the website — “will be a real problem for the president in terms of his credibility.” One wonders whether Matthews then called himself a racist since his most consistent theme has been that any critic of Obama might as well be a Klansman.

On the very same Tuesday as the NBC and CBS reports, the reliably liberal Richard “tea party brats” Cohen of the Washington Postpublished an op-ed entitled “A question of competence” in which he calls the administration’s response to the failed Obamacare rollout “pathetic.” Cohen suggests that another president (presumably almost any other) would have reacted much differently, taking the problems with more seriousness than this White House seems to. He worries that Obama “has lately so mishandled both domestic and foreign policy that he is in mortal peril of altering his image.” Better late than never, Richard.

And even Richard Cohen now agrees with so many rational Americans that the failure of Obamacare (along with the president’s disastrous performance regarding Syria) “help validate the once-frivolous Republican charges of incompetence. A competent president would beware.” It must have pained Cohen to write this almost as much as it pains his Post readers to read it.

If I may return to my original metaphor, it will take some time — but less time than the left expects — for the cracks in the Obama administration’s windshield to spread into the president’s approval ratings and, shortly afterwards, to boost Republican prospects in the 2014 elections. The Rasmussen Reports daily tracking poll of Obama’s job approval shows 23 percent “strongly approve” (versus 40 percent strongly disapprove) and 47 percent overall approval (versus 51 percent overall disapproval), representing substantial declines over the past two weeks and hovering near his lowest levels of the year. Gallup’s daily job approval survey has shown the president’s disapproval level exceeding his approval level consistently for the past month.

The increasing negativity about Obama and Obamacare is not yet influencing polls regarding the 2014 elections, in part because House Republicans came off looking so ineffective during the government shutdown. This will change soon, as the GOP works to make the election a referendum on those who supported an increasingly damaging and unpopular law.

The important change is not that Republicans will campaign against Obamacare, but that they suddenly have allies, albeit hesitant, unwilling, or unwitting, among “mainstream” media reporters and pundits. The Obamacare website fiasco may have caused the first ding in the windshield, but with even liberals — who used to serve as the president’s own chip repair kit — pounding on it now, the sound of the administration’s last bit of credibility crashing into thousands of sharp pieces cannot be far off.