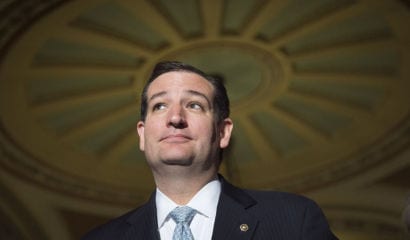 The Texas Senator, speaking at The American Spectator’s annual Washington gala Wednesday evening, was nothing if not resolute in his attacks on the disaster that has become Obamacare.

“Should we have fought this fight?” he asked, his resounding yes coming by way of citing the differences between the way the disaster of Obamacare is perceived in Washington and out in the country. “If you get out of Washington there’s no ambiguity” on the question, Cruz said.

Cruz came out swinging against his GOP Establishment critics in the Senate and elsewhere, and was fearless in taking on his critics. Saying among things that when his opponents in the GOP said their disagreement with him was on “tactics” — and he asked for their tactics — the response that came back was the sound of “crickets chirping.”

“I’m going to suggest to you that in my view that is just complete hogwash,” the Texas Senator added bluntly, turning the tables on his GOP Senate critics. He not only accused them of not knowing how to negotiate, he gestured to fellow guest Donald Trump — famously the author of The Art of the Deal  — and backed up Trump’s point on the GOP Senate naysayers saying they needed to learn how to negotiate.

Yet again Cruz underlined the considerable difference between the GOP Establishment and Americans living Outside the Beltway — the very people who are getting hammered by the real world results of Obamacare.

He detailed meetings with his Texas constituents in the small town of Kerrville. Where one employer after another, asked to cite their biggest problem — with no suggestions from Cruz — repeatedly said it was Obamacare. They were doing everything from reducing numbers of employees to 30 and 40 so as not to trigger the 50-employee threshold that forces Obamacare to kick in to cutting employees to 29 work hours a week to moving their company’s manufacturing capability to China — all to avoid the drastic consequences of Obamacare. They wanted something done immediately — rejecting the notion that Cruz should have listened to those critics who have repeatedly suggested the GOP should simply stand back and let the program collapse of its own merit. Americans are hurting, he said repeatedly, citing a constituent who said that the single biggest obstacle to his business was Obamacare. They wanted something done about Obamacare right now — government shutdown be damned.

Cruz never retreated under the withering criticism that has been coming his way from Establishment GOP Senators and the larger Washington Establishment. The strategy had the following stages:

Stage 1: Energize the grass roots. The strategy worked, Cruz says, with a number of his colleagues spending August making the case across the country, Americans lighting up the phones on Capitol Hill and some 2 million people signing a petition to support the defunding.

Stage 2: The House GOP had to stand up and lead — and he went out of his way to call the House GOP a “profile in courage” for demanding the defunding of ObamaCare.

Stage 3: Senate Republicans had to stand up for their House GOP colleagues, to unite.

Then, in Stage 4 — pick off vulnerable Democrats. Instead, says Cruz, the Senate GOP went out of their way to attack their House colleagues. One moment they were saying the House would never vote to defund ObamaCare — then when they did, GOP Senators attacked them for doing so.

He talked about the critical responses to what he and Senator Mike Lee had done. And answered them.

What did the insistence on the shutdown accomplish?

It roused the grassroots — energized the American people. It forced Harry Reid to march Senate Democrats to “a whole lot of stupid votes. Every Democratic member of the Senate” voted in favor of exempting Congress from Obamacare — and Cruz promised that a year from now Democrats will not be let off the hook when it comes to taking responsibility.

He noted that once everyone said there was no way to get the President to delay Obamacare — and that just an hour earlier NBC was reporting the White House was announcing it would in fact be delaying aspects of Obamacare.

The answers are not going to come from Washington, Cruz concluded. Which is why energizing the American people was so important. The GOP does not need a rebranding, he said — rebranding is for those who sell soap. There was a need to focus on economic opportunity and economic growth.

In addition to his defense of the defund Obamacare effort, Cruz spent time talking about the importance of growth as a “foundational opportunity” and that every single thing the GOP does should focus like a “laser” on opportunity.

The Spectator dinner is named for the late Robert L. Bartley, the legendary editorial page editor of the Wall Street Journal. Bartley, along with another Journal editorial writer, the late Jude Wanniski, played key roles in the advent of what is called “supply-side economics” — or as then-Congressman Jack Kemp accurately termed it “classical economics.”

We speak for free markets and free people, the principles, if you will, marked in the watershed year of 1776 by Thomas Jefferson’s Declaration of Independence and Adam Smith’s “Wealth of Nations.” So over the past century and into the next, the Journal stands for free trade and sound money; against confiscatory taxation and the ukases of kings and other collectivists; and for individual autonomy against dictators, bullies and even the tempers of momentary majorities.

He went on to discuss Ronald Reagan’s conversion to lower tax rates — and the debate in the 1970’s between simply cutting the budget or austerity (Kemp used to call this “root canal economics”) and the vital importance of economic growth.

Cruz discussed a conversation in the Senate with a GOP Senator he wouldn’t name — and whom he described as a “good guy”. The Senator in question was emphatic about sequestration and its popularity with Americans. Cruz replied to his colleagues that most Americans thought sequestration was “an exotic wildlife disease.” That the budget cuts were fine, but the most important thing on the GOP agenda should be economic growth.

Cruz even compared recent events to the 1970s, which were of course the period when Bob Bartley, Wanniski, Kemp and others were doing the sharp-eyed analysis and thinking that would result in the success of what came to be called “Reaganomics.”

Perhaps it should be noted here, speaking of Bartley, just what Bartley’s assessment was of the 1970’s. Wrote Bartley in his book The Seven Fat Years: And How To Do It Again:

In the years before 1982, democratic capitalism was in retreat. It’s economic order seemed unhinged….Economic confusions and a sense of futility sapped the morale of the Western people, leaders talked of “malaise” in America.…

In a remarkably short time, all of this has been totally reversed. Today mankind reaffirms democratic capitalism as its role model.

There is no question today that the fight for what Bartley called “democratic capitalism” is on again once more.

Millions of Americans see the economic and financial structure of America under assault.

At the core of the dispute between Ted Cruz, the Americans in his Texas audiences who give him eight minute standing ovations — and the GOP Establishment is the belief that the Establishment is in fact flying under false colors.

This is symbolized by Establishment Republicans insistence that the GOP’s control of only the House means the GOP can’t act on its own. That the GOP must win the Senate and the White House before ObamaCare can be repealed.

Once upon a time the GOP controlled the White House, the Senate and the House. And they immediately set about things like expanding the government with gems like No Child Left Behind instead of abolishing the Department of Education.

Which goes in turn to Cruz’s popularity with the conservative base of the GOP. He makes no bones about his support of economic growth — and limited government. A GOP staple.

The difference between Ted Cruz and all those GOP Senators and GOP Establishmentarians who disdain him is that Cruz is seen as one of a handful of GOP Senators — 19 to be precise — who actually are determined to make the actions match the words.

“Should we have fought this fight?” Ted Cruz asked. “If you get out of Washington there’s no ambiguity.”

There is nothing ambiguous about Ted Cruz.

And his talk at The American Spectator dinner, which you can hear at this link, is a reason why conservatives all over America outside Washington are responding to him.

There’s no hogwash about that.

They know a profile in courage when they see it.