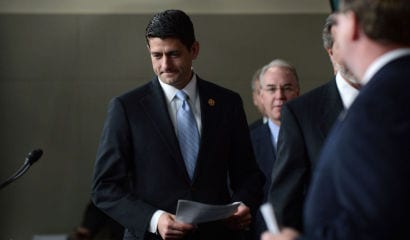 When House Budget Committee Chairman Paul Ryan (R-WI) released his FY 2013 budget — which on Thursday passed the House of Representatives yesterday on a 221-207 vote, then went down in similar party-line style in the Senate — he must have known that he would face criticism from all sides, including the usual liberal big-spenders and the too-frequent conservative circular firing squad.

And indeed he has.

We have the usual and transparently ridiculous suggestion by Democrats that cutting the rate of growth of government spending to a still-high 3.4 percent will cause the deaths of thousands of Americans, or other less severe calamities.

There are also critics on the right. The good people at Americans for Limited Government, call the Ryan budget “overhyped” because it does not cut spending fast enough. And AEI’s Jim Pethokoukis, one of the country’s smartest writers on economics, lists a variety of ways in which the Ryan plan “is far from ideal” — while calling for Ryan to be “unleashed” in order to “create a plan far bolder and more innovative.”

I understand these frustrations, and hope that an eventual American federal budget shows more spending restraint and entitlement reform than the current Ryan plan.

This does not, however, mean that today’s criticism from the right is politically savvy: Ryan lives in the real world and knows that major change must start somewhere. Show that baby steps are relatively painless; walk halfway to your goal, then pass legislation to walk half of what’s left, and keep doing that until we’re as close to the goal — whatever that specifically ends up being — as possible. This seems most likely to be Paul Ryan’s strategery, particularly when it comes to spending issues that the public does not understand well and has some fear of after years of Keynesian indoctrination. However, to the extent that jabs from conservatives makes Ryan appear moderate, he probably doesn’t mind (as long as his budget still passes the House.)

But the criticism being blasted at the Ryan budget from both bipartisan barrels is that it assumes the repeal of Obamacare.

Congressman Ryan is not shy about this. On Fox News Sunday, he told moderator Chris Wallace that “Our budget does promote repealing Obamacare and replacing it with a better system.”

Let’s dispense with discussion of predictable pushing-granny-off-the-cliff liberal fear-mongering and move directly to conservatives and libertarians who are attacking Ryan’s budget move against Obamacare as “highly unlikely,” as quixotically tilting against “the law of the land,” as not offering a detailed alternative to the law, and so on.

For political experts to be attacking Ryan on this point shows a serious deficiency of imagination and messaging — perhaps not surprising for a party that found a way to lose the presidential election to Barack Obama despite his presiding over the longest period of high unemployment in our nation’s history and having commensurate approval ratings.

Paul Ryan cannot possibly think that Obamacare will be repealed in the short term. But that is not his point even though pundits who should know better seem to think it is.

One of the talking heads in Fox News’s trio of “political insiders” suggested on Sunday that Ryan’s approach was ill-considered because the GOP had “already lost an election on that issue.”

This is simply not true.

The election season was disappointingly light in attacks on Obamacare, thanks to Governor Mitt Romney’s paternity of Romneycare which is causing skyrocketing health insurance premiums in Massachusetts, along with Boston having one of the nation’s longest waits to see a doctor. Whatever differences Romney’s law may have with Obamacare barely mattered because they were too subtle for the public to understand. In politics if you’re explaining, you’re losing.

So Romney was less able to run against Obamacare than any other Republican candidate would have been. In short, it is impossible to conclude that the 2012 election was a referendum in support of a government takeover of the health care and health insurance industries, which is what Obamacare manifestly is.

But separate from the specific health impacts, the wisdom of Ryan’s assuming the repeal of Obamacare in his budget is that it forces anyone who is paying attention to recognize immediately that Obamacare is hugely, unaffordably expensive.

Imagine Paul Ryan facing a Democrat in conference over the budget:

Democrat: “Mr. Ryan, we need to keep Obamacare fully funded.”
Ryan: “OK, but that change adds $2 trillion dollars to our national debt over the next decade. How are you going to offset that to keep a budget that balances ten years from now?”

We know, and not just because President Obama told us last week, that he thinks deficits — and by extension our national debt — don’t matter. But they matter a lot to the American people, and every chance Paul Ryan has to make the left support endless spending and endless deficits is a chance to wake a few more Americans up to the inevitable financial debacle the nation faces if we stay on the Obama path. Highlighting the cost of Obamacare is a smart part of such a strategy.

Again, it is nearly shocking how many conservative or Republicans get in front of a microphone and have no understanding of the subtle brilliance of Ryan’s move. It is not just ideology. It’s good politics.

It would be one thing to criticize Ryan’s approach to Obamacare if the law were extremely popular, if it were working as the president claimed it would, and if there were broad acceptance, particularly in conservative circles, that this is a fight we have lost forever.

None of these is the case.

Obamacare and its impacts are unpopular: According to Rasmussen Reports, nearly twice as many Americans have a very unfavorable view of Obamacare as have a very favorable view of it. Fifty-four percent of likely voters expect the U.S. health care system will worsen over the next two years. Three quarters of us think the law will cost more than originally projected and most believe it will raise rather than lower costs. And nearly half of likely voters believe that Obamacare will do more economic damage than spending cuts. (It’s disappointing that it isn’t much more than half, since government spending cuts will likely help the economy outside of anything but the shortest-term analysis.)

Obamacare is having opposite impacts from those the president promised: Barack Obama famously assured us that his signature “achievement” would cause health insurance premiums to drop by $2500 per year for a typical family of four. Instead, just the opposite is happening, and insurance costs are skyrocketing across the country.

No rational person would have expected anything other than what is happening right now: there is no way that a combination of guaranteed issue and eliminating higher premiums for preexisting conditions could cause anything other than a dramatic price increase since it encourages people to wait until they get sick to buy insurance (a concept completely at odds with what insurance is supposed to mean, namely financial protection against unknown future risk).

Obamacare also adds many more patients to the system while discouraging doctors from taking new patients, and discouraging potential future doctors from entering medicine as a career. More demand for services, less supply of services. An eighth-grader could have told you what this would do to prices, but Obama remains clueless.

Even the dupes at CBO are now belatedly recognizing what Obamacare health insurance subsidies will cost, recently raising their estimate of the average annual subsidy to $5,510 from their original 2010 forecast of $3,970. In just over two years, their estimate for the per-subsidized person cost of Obamacare is up nearly 40 percent… which, probably not coincidentally, is just less than my family’s health insurance premiums have increased over that same time.

Separate from the numbers — though the jump in cost is painful to and noticed by average Americans — Obamacare is also costing jobs and hours worked for those fortunate enough to have jobs, particularly among lower-skilled and younger workers who often get jobs in retail and restaurants.

And we’re also learning that Obama’s promises “if you like your doctor, you can keep him” and “if you like your plan, you can keep it” were both lies. How will your typical American mom feel about Obamacare when she realizes that she now must wait longer and spend more for her child to see a doctor other than the doctor her family has been happy with for the past decade?

Attacking Obamacare is good politics and, perhaps the best indicator, good business: The ObamaCare Survival Guide remains in the top 100 books on Amazon.com, and number one in categories of social policy, health law, and health policy. It is also number 3 on the New York Times bestseller list for paperback advice books. Another book, Betsy McCaughey’s Beating Obamacare, ranks first through third in three different Amazon sub-categories. Note that these books are not about “Explaining” or “Understanding” Obamacare, but rather “Beating” and “Surviving” it.

C-SPAN’s BookTV aired an episode about a book entitled Why Obamacare is Wrong for America, written by Grace-Marie Turner and several other experts in health care policy. And an Amazon.com search for “Obamacare” brings up dozens of books about the law, with many of the best-selling titles including words like “survival,” “disaster,” and “takeover” while offering help to “decode” and “understand” a bill which nobody knew the contents of until after it was passed (another point that voters should be routinely reminded of) — and most still don’t.

Ads for these and similar books and information are everywhere on conservative-leaning talk radio and satellite radio stations. Advertising dollars are not spent on a whim and not spent without in-depth market research. The popularity of these books and the willingness of people to spend substantial amounts of money to market them show that people who are in touch with the thinking of many real Americans recognize the deep and abiding unpopularity of the only law commonly known by this president’s name.

Advocacy organization Restore America’s Voice is revving up an anti-Obamacare television ad campaign with a budget of up to $100,000 per week. The biggest spender on pro-Obamacare advertising is the Department of Health and Human Services, which has routinely thumbed its nose at Congressional inquiries into that use of millions of dollars of taxpayer money. Even big labor unions have now realized that Obamacare is bad news.

The leftist intelligentsia doesn’t understand, but Republicans, particularly of the Tea Party variety, in both the House and the Senate continue to push for the repeal of Obamacare. House members in particular would not aggressively court electoral defeat by repeatedly calling for and voting for a measure which they did not think would be popular, which is to say representative of the will of their constituents.

Senator Ron Johnson (R-WI) gets it. Mitt Romney doesn’t. It’s time for more Republican politicians, conservative thinkers, and media pundits to get it: Obamacare remains an unpopular law with increasingly visible damaging impacts on all Americans, but especially on the middle class.

For Republicans, working against and voting against Obamacare, reminding the public of its costs — whether financial or in health care choice and quality — as Paul Ryan has wisely done with his 2013 budget, is both good policy and good politics.