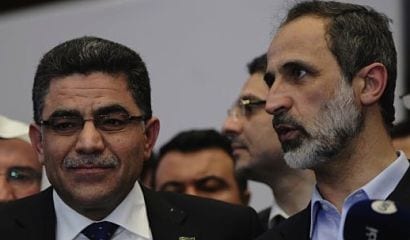 Throughout the two years of the Syrian Uprising, the opposition to the Assad regime has never been notable for its coherence or unity. With the recent appointment of Ghassan Hitto to head an interim government though and the subsequent resignation of the leader of the political opposition, Moaz al Khatib, the forces arrayed against the Syrian government have reached new lows of fractiousness and dysfunction. Khatib resigned in frustration on March 24 from his erstwhile position as chief of the Syrian National Coalition for Revolutionary and Opposition Forces, the umbrella group for the political factions opposed to the Assad regime. The officially stated motive behind Khatib’s resignation was his exasperation at the fecklessness of the international community and its refusal to provide the kind of support needed to oust the Assad regime. Unofficially however, we can safely assume that having been supplanted by Hitto and the Muslim Brotherhood must have played a role.

The selection of Hitto happened at a meeting of the National Coalition in Istanbul and was reportedly strongly pushed by the governments of both Turkey and Qatar over the objections of the United States and Saudi Arabia. Both Qatar and Turkey are very favorably disposed toward the Muslim Brotherhood and Hitto, an expatriate who has lived in Texas for 30 years, is generally thought to be quite close to that organization’s Syrian incarnation. After considerable public pleading by Qatar, Turkey and other members of the Syrian opposition, Khatib took Syria’s seat at the Arab league on March 26, further confusing the situation and the issue of leadership of the opposition. What exactly his role will be in light of Hitto’s mandate to form a government remains unclear. One thing that is clear is that Turkey and Qatar both intend for the more amenable Hitto to be in charge.

Khatib, formerly a preacher at Damascus’s famous Ummayad Mosque (one of the holiest sites in Islam), enjoys widespread popularity within the opposition, both inside Syria and outside. This was on display when twelve members of the National Coalition suspended their memberships in that body in protest at his effective ousting. In a considerable understatement, Rafif Jouejati, English language spokeswoman for The Local Coordination Committees (a network of anti-Assad activists inside and outside Syria) described the process by which Hitto was selected as “lacking transparency.” She also criticized what she called the “power-grabbing antics of the Muslim Brotherhood and other political wannabes” within the Syrian opposition.

Nor was the armed opposition pleased with the process by which Khatib was shown the door. Salim Idriss, the nominal commander of the Free Syrian Army (insofar as that body can be said to exist as a cohesive force), also voiced his opposition to the move to replace Khatib. “We unequivocally declare that the Free Syrian Army, in all of its formations… conditions its support and cooperation on the achievement of a political agreement on the name of a prime minister,” Idriss was reported as saying.

Considered a moderate and a nationalist, Khatib drew the ire of the Syrian Muslim Brotherhood and various other Islamist forces within the opposition by offers he made of sincere political dialogue with the regime to end the war. These offers were summarily ignored by the Assad regime, as Khatib doubtless knew they would be. They represented an attempt by Khatib both to call the regime’s bluff in claiming to want dialogue and to assert his independence from Islamists within the opposition. Accordingly, the attempt marked him in the eyes of the Muslim Brotherhood and their backers in Doha and Ankara as less malleable than could be wished. The Qataris and Turks were so intent on replacing Khatib with a leader more amenable to the Muslim Brotherhood that they reportedly violated an understanding they had reached with Saudi Arabia prior to the National Coalition’s meeting whereby it had been agreed that a consensus candidate, former Agriculture Minister Asaad Mustafa, would be named interim prime minister.

All of this is symptomatic of a broader development in the region and in American foreign policy under the Obama Administration. The President’s desire to pivot (or in the new, preferred parlance, to rebalance) away from the Middle East and toward Asia has given rise to the policy of “leading from behind” which has been on display in the American stance toward Syria for the last two years. This unfortunate euphemism is, sadly, an apt description of President Obama’s timidity and excessive reticence to involve the United States in the Levant. What may have been justifiable prudence in the summer of 2011, very clearly became disastrous indecision about fifty thousand bodies and half a million refugees ago.

Apart from the demonstrable toll in human suffering that has resulted, at least partly, from this hands-off approach, another grave consequence, no doubt of more interest to the “realists” counseling non-intervention, has been made plain by the recent turmoil in the opposition. The refusal of the U.S. to involve itself directly and whole-heartedly in supporting the Syrian opposition means that it has very little ability to help determine the nature of that opposition. Instead, its considerable latent influence has been forfeited to Turkey, Qatar and (to a lesser extent) Jordan and Saudi Arabia. It is this American abdication that made it possible for the Muslim Brotherhood to gain control of the National Coalition’s predecessor, the Syrian National Council and it is the lack of U.S. money, weapons, and diplomatic energy that have created a situation in which the American desire to avoid the unnecessary rancor of forming an interim government was flatly ignored, as are most other American concerns.

As Michael Weiss pointed out in his brilliant treatment of this topic in NOW Lebanon, the fact that Idriss and others in the armed opposition who receive an enormous amount of their funding and weapons from Qatar are willing to buck their patrons’ party line and support Khatib represents a huge opportunity for the U.S. If it were inclined to do so, the Obama administration could give Idriss’s Supreme Military Council the money, weapons and training it needs to overthrow the Assad regime. This kind of involvement would give America the sort of pull with the armed opposition needed to help ensure that a post-Assad Syria doesn’t turn into a theocratic hell hole or a Hobbesian nightmare of feuding war lords and factions on the order of second Somalia, except in the heart of the Middle East and on Israel’s border. It would also afford the U.S. a great deal of leverage in determining what parts of the opposition were best armed and most influential.

The Obama Administration though, is apparently none too concerned by these developments and not at all eager to make much of an effort to influence events. Secretary of State John Kerry downplayed the Muslim Brotherhood putsch against Khatib. “The notion he might resign has been expressed on many an occasion and is not a surprise,” Kerry said, adding, “The opposition is more than one person.” That’s comforting. In part, this apparent nonchalance can be explained by this administration’s well-established willingness to work with and tolerate the Muslim Brotherhood as, in their (erroneous) view, the best plausible alternative to even more odious Salafis and Jihadis. Undoubtedly, simple damage control and spin are also playing a role.

What Mike Doran of the Brookings Institution has aptly characterized as the Obama Administration’s “non-policy” on Syria has left a vacuum that is now visibly being filled by the Muslim Brotherhood and its patrons. Critics will likely question how much the U.S. would be able to influence events even if it devoted itself and its resources to doing so and it is true that there are very definite limits to what any foreign policy can hope to achieve. To quote a bit of cliché gambling sagacity though, you certainly cannot win if you don’t play. Moreover, it would be difficult to imagine many outcomes worse than those that have come about as a result of leading from behind.