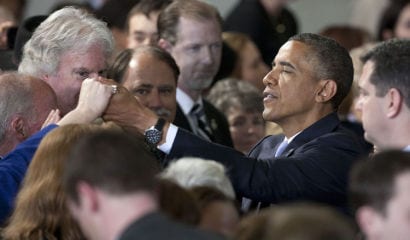 Frustration is taking its toll in the liberals’ war against guns. President Obama, pushing his broad gun control agenda, said we should be ashamed if we’ve forgotten the Newtown shooting so soon. The New York Times opined that Obama is being shouted down by the “gun lobby,” even though he and Biden had been crisscrossing the country “…making a forceful case for a package of laws that would reduce gun violence.”

That, of course, is the media narrative on gun control. For every issue there is a narrative: a set of assumptions and boundaries of thought with which every story (and editorial) is tailored to agree. False narratives usually serve the left well. For over eighteen months, American politics was forced into as media narrative tat ignored everything else and focused on Obamacare which, we were told, would make healthcare cheaper and more available, the precise opposites of its effect. For months before that, we were told Obama’s “stimulus” would create tens of thousands of jobs and get our economy growing. It did no such thing, but the media narrative helped it become law.

Now the gun control narrative is equally false, and borders on the insane. It has become so wacky that it resembles the left’s hysteria on “global warming.”

Start with Obama’s first premise: that his agenda would prevent more school massacres like the Newtown shooting. But we’ve already seen the centerpiece of his agenda fail: there’s no evidence that there was a drop in crimes committed with so-called “assault weapons” during the ten years the earlier ban was in effect. And for all the burgeoning sales of “assault weapons” for almost a year, where’s the outbreak of crimes and mass murders they cause? Maybe someone needs to draw a “hockey stick” curve to “prove” to Chris Matthews that the “assault weapons” really are the problem. (We know global warming – if it ever existed – ended sixteen years ago but there’s no arguing facts against the liberal narrative.)

Maybe the libs want to tie gun control to global warming. Firing a gun creates heat, but so far no one has claimed that they emit atmosphere-destroying carbon. Maybe the lefties don’t want to tie two losing causes together for fear of each dragging the other down. Or maybe it’s because, despite the libs’ efforts, the NRA is more popular than Mayor Bloomberg and Chuckie Schumer.

And that’s not even the craziest disconnect between the media gun control narrative and reality. If you go back through the horrific mass shootings of recent history – from Charles Whitman in the Texas tower in 1966 to Adam Lanza in Newtown last December – each of these people was clinically insane. We know, for example, that a Dr. Heathy knew of Whitman’s fantasy of going into the University of Texas tower to shoot people with his deer rifle. And we know that Dr. Lynne Fenton, treating Colorado movie killer James Holmes, notified university police that Holmes was dangerous to society. The campus cops did nothing and we don’t know if the real cops were even told.

And there is nothing in the Obama gun control agenda, nothing in the Senate bills to be voted on this week, to do anything to take people like Whitman, Holmes, Lanza off the streets. That’s what you’d do if you really wanted to reduce gun violence and massacres. But the liberals aren’t interested in that: they just want to control gun ownership.

There could be legislation requiring states, cities and schools to share with police information indicating someone like Whitman, or Holmes, or Lanza or any of the others were dangerous. There could be legislation requiring states to either legislate that people such as these be involuntarily committed or the states would lose their federal subsidies for highways or such. But while they war against guns the liberals insanely leave the dangerously insane undisturbed.

But to liberals there’s no problem here. These are the same people who can claim that the global warming “problem” can be solved by closing coal-fired electric plants in the U.S. without even mentioning what’s going on in China and India. You have to conclude that whether it’s gun control or global warming or whatever the left is most fervently pitching, facts don’t matter: emotions do. And guns are a deep, emotional cultural issue for Americans.

Obama used to understand this, but his understanding was limited by his own ideology and context. Take this cut from a speech he made all the way back in April 2008, talking about why he wasn’t connecting with a lot of Pennsylvania voters. He said:

And it’s not surprising then they get bitter, they cling to guns or religion or antipathy toward people who aren’t like them or anti-immigrant sentiment or anti-trade sentiment as a way to explain their frustrations.

He was partially wrong, of course. Yes, people are very frustrated with what is now his economy, not George Bush’s. The jobs numbers that came out last week are dismal: the economy isn’t growing, people are suffering and, according to reports I’ve seen, about 90 million unemployed people are so frustrated that they’ve given up looking for work.

But that’s not what’s causing people to dig in against gun control. Give a man a job, and he’ll still fight to keep his guns.

And that’s the real point here. You can pass a phony stimulus bill that costs almost $1 trillion and people will be angry about it, but they won’t really fight. When you get to socializing – and wrecking – our healthcare system people will fight, because it touches them much more directly and plainly than just spending does. We saw that in the townhall meetings across the country, the protests that gave birth to the Tea Party.

What the liberal media don’t understand – and what makes their gun control narrative fail – is the way people regard guns and gun control. It’s not, as the New York Times says, that the “gun lobby” is shouting down the president. Set aside for the moment the idea that there is a “gun lobby” that’s dominating the debate, because there isn’t. The NYT and other media have tried to Alinsky the NRA and the gun manufacturers, demonizing them at every chance. That doesn’t matter.

Their success in demonizing the NRA and the manufacturers doesn’t matter because the gun owners aren’t slick Inside the Beltway types. They’re not lobbyists or wealthy company owners or any of the people the liberals are trying to demonize. Instead, they’re the guy who keeps a snub-nosed .38 in his nightstand to protect his family. They’re the guys and gals who keep a couple of shotguns or deer rifles to hunt game. And they’re people who collect guns for the hell of it.

They’re not, like the NYT insists, crazies who think they may have to take arms against their government. Rather they’re people who have two things in common. First, they appreciate and insist on the freedoms preserved in the Second Amendment. Second, they have an abiding distrust of the government whenever it starts tinkering with gun control.

It was apt that Obama thought some people cling to their guns like they cling to religion or oppose illegal immigration. Opposition to gun control may be as deeply-embedded a belief as opposition to abortion. That won’t stop liberals from trying, again and again, for more gun control. But it will be the reason they’ll fail.