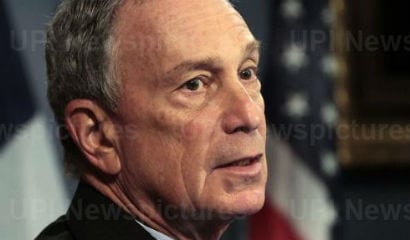 MAYOR MICHAEL R. BLOOMBERG of New York City ought to know by now that gun owners do not trust him. The more he agitates against guns, the more they dig in their heels. The more magnificoes he gets behind his Mayors Against Illegal Guns, the more gun owners and advocates of the Second Amendment see him as their enemy. He and his colleagues might only oppose the ownership of small cannons. They might only oppose extending gun ownership to convicted killers and to the criminally insane. Still gun owners and Second Amendment supporters will be suspicious of him.

They quite rightly perceive Mayor Bloomberg as harboring ulterior motives in his sonorous pronouncements on guns. Small cannons today, but tomorrow handguns and pea-shooters and slingshots. Frankly, I side with those who suspect the mayor of treachery.

Count me in the camp with Senator Mark Pryor of the great state of Arkansas, who has said of Mr. Bloomberg, “I don’t take gun advice from the mayor of New York City. I listen to Arkansans.” Doubtless, Senator Pryor would agree with me that a mayor who would ban large bottles of sugary soft drinks and harangue against “trans fats,” which can be so delicious when added to restaurant food, is not to be trusted in the debate about guns. The mayor has set his sights against a long list of consumer goods. I might agree with him that some things on his list are not very appealing to me. Perhaps they are even unhealthy. But that decision is up to the consumer, not to an epicurean like me or to a nutritionist like the mayor. Besides, he is too eager to regulate the free market.

Fundamental to the debate about guns is that those who would regulate them, however sensible their regulations might sound at the outset, have lost the trust of large numbers of the American people. As I have implied, first they would call for regulations that are perfectly sensible, but that would not placate them. Next would come encroachments on fundamental liberties. The right to keep and bear arms is found in the Second Amendment, and increasingly the Mayor Bloombergs of this world share the views of other progressives. They find the Constitution old-fashioned and outdated. The rest of us find the Constitution a timeless protection of our rights.

Essentially the gun debate is about our rights. Moreover, there are millions of guns out there already, as many as 300 million of all shapes and calibers. Gathering them all up or even registering them would be an impossible infringement of our rights. Accommodating the views of gun owners and gun control advocates is time-consuming and ultimately futile.

If we want to get serious about gun violence, we should take the NRA’s National School Shield program—announced on April 2—to heart. Train and enable school personnel to carry firearms. Station police in high-risk schools. The NRA’s 225-page report contains dozens of recommendations to improve safety in our schools. Teachers and school administrators have charge of the nation’s students by day. They ought to have the tools to protect them. There is no reason why teachers and administrators cannot responsibly carry guns. Those who do not want to carry guns do not have to be armed, but just a few trained people in a school will act as a deterrent to violence. The evidence of recent years is that schools are the target of killers. They need to be defended.

The sooner we adopt the NRA’s program, the sooner gun violence will end in the nation’s schools. President Barack Obama, Mayor Bloomberg, and the rest of the pro–gun control advocates claim action is exigent. I agree with them, but time-consuming wrangling is of no help. Action that is futile in getting guns out of the hands of violent assailants is no help to those who want an end to the killing of innocents. If the time to act is now—as I think all sane people can agree—the NRA’s program offers hope. How about giving it a try?

THE AMERICAN LEFT cares so much for humanity that it even expends copious draughts of compassion toward us, toward you and me, toward suave, dégagé conservatives. The left’s members really fret over how elements of the “extreme right” are undermining the Republican Party, consigning it to oblivion.

The latest moral colossus to perform this exemplary task is Richard Cohen of the Washington Post, but there are many more from all the precincts of the left. The other day I even detected this concern for us from the pollster Andrew Kohut of the Pew Research Center. Writing a piece on the future of the Republican Party, he expressed his concern that advocates of “staunch conservatism” have left the Republican Party “estranged from America.” If moderate Republicans do not smarten up and presumably rid the party of these “staunch conservatives,” the party will go so far to the right that it will be replicating the political suicide of Senator George McGovern and his McGovernite zealots back in 1972.

If you are old enough, you may remember how in 1972 the left was apoplectic that McGovern was leading the Democratic Party out into the wilderness. You do not recall it that way? You have forgotten? It did not seem like that at the time? The left in 1972 was full of its usual brag and bounce that crazy George was on the right side of history, and victory was only months away. Is Mr. Kohut mistaken?

I think he is. Actually, this grave concern by the left over the projects of the “staunch conservatives” within the Republican Party is one vast sham. A similar concern by the left for the extremist tilt of the Democratic Party is never apparent, and the reason is obvious: The concern does not exist. Yet the Democratic Party over the years has, for a certitude, gone left, far left. Review the evidence. On issue after issue—from social policy to fiscal policy—the Democrats have moved leftward. With the help of their amanuenses in the media, they are never forced to talk about it, but it is a fact. With the leftward rush of the party proclaimed in the Prophet Obama’s State of the Union Address, it is the Democrats who are extreme. Their day of reckoning will come on November 4, 2014.

The left’s sham is not without its effects on weak-kneed Republicans and the independents, however. Senator Ted Cruz, Texas’ latest gift to American politics, is reportedly stunned by his wobbly-legged Republican colleagues who patter up and down the halls of the Senate. Apparently they believe that the American left really has the best interests of the Republicans at heart. Of course they are wrong.

Perhaps one has to live out in the states and the congressional districts to see how wrong the left and susceptible Republicans are. Out across the fruited plain, a majority of governors’ mansions (30) are controlled by the Republicans. The Republicans also control a majority of state legislatures (Republicans 27, Democrats 17). Back in Washington the Republicans control the House of Representatives, and as of yesterday five Senate Democrats are stepping down in 2014. The upper chamber is very delicately balanced now and will probably shift to the Republicans in 2014. Then there is one additional element to give the Republicans something to smile about. Back in 2012, the year that gave the left so much reason for hope, the Prophet Obama won 3,591,303 fewer votes than in 2008. The Democrats suppressed the Republican turnout in 2012 by rendering Mitt Romney an oligarch. What is more, they had a splendid ground game that got out theretofore non-voting minorities in the swing states. But 2014 will be different.

Then, thanks to the cost and confusion of Obamacare and the ongoing economic malaise, the same issue will be salient that was salient in 2010: the economy. Roughly 42 percent of the American electorate is conservative compared to 18–20 percent that is of the left. Roughly 35 percent of the electorate is independent. The majority of the independents, provoked by the sour economy and by budget overruns, voted with the conservatives in 2010 and 2012. If the “staunch conservatives” turn out to vote in 2014, it is going to be another landslide on the order of 2010…and you know who won that landslide.