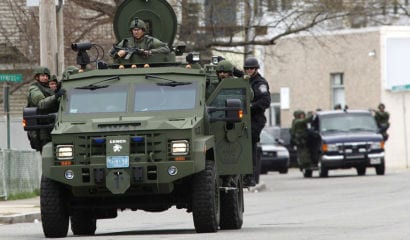 Men and women from all over the world come to Boston to run the Marathon. But bet on this: Next April will see a record number of Americans running it. Many of them will be people who competed in this year’s fatal race. Some of them will be in wheelchairs and at least one will be staggering along, with support, on prosthetic legs he or she hasn’t mastered yet. America’s collective answer to terrorism? “Peddle it somewhere else.”

It was not always this way. During most of the 1980s I served in the Pentagon as Director for Special Planning. The post included overseeing the United States’ military response to global terrorism. At the time there were two major terrorism venues: Europe and the Middle East. In some cases, the two collided, with groups from both fronts cooperating in their terrorist ventures, e.g. the June 1976 hijacking of Air France Flight 139 to Entebbe, Uganda was carried out by the Popular Front for the Liberation of Palestine and Germany’s Revolutionary Cells. Leftists and anarchists banded together in the conviction that terrorism was a weapon that would allow them to change the world. It was not a novel idea.

It was Lenin who said that “the purpose of terrorism is to terrorize.” An equally instructive quote is from the Chinese military thinker Wu Ch’i, who taught “Kill one, terrorize a thousand.” Years later my friend Brien Jenkins elaborated on this: “Terrorists,” he said, “don’t want a lot of people dead; terrorists want a lot of people watching.” Wu Ch’i would have smiled knowingly at the response of Americans to terrorism in the pre-9/11 era. Vacation trips to Europe were cancelled in response to assassinations carried out by Germany’s Red Army Faction. Tourism to Italy, France, Israel, even Britain fluctuated downward whenever a terrorist event occurred in any of those nations. Americans in droves stayed away from the 1988 Summer Olympics in Seoul, Republic of Korea.

The Venezuelan-born terrorist Ilich Ramirez Sanchez, aka Carlos the Jackal, became an all-purpose boogeyman, spotted everywhere and nowhere, sowing terror by the mere mention of his name, although he was never known to have set foot in the United States. In time, and it didn’t take much time, our European friends reacted with dismissive sneers to the ease with which Americans allowed themselves to be terrorized. There were reasons for this: generations of Europeans had seen their land ripped up and their people bloodied by conflict. They knew they could take it. They had been through two World Wars. They had been bombed. The purpose of the Third Reich’s use of the V1 rockets on London specifically was to terrorize Londoners. It worked at first, a little. And then it didn’t. Instead, it made them angry. That was another one of Hitler’s bad ideas.

Today, Europeans and Middle Easterners take terrorism in stride. Israelis respond to bombings cosmetically. They swiftly clean up the mess, the blood, the broken bodies, the burnt and scarred property. They stand the chairs back up, replace the windows, straighten the curtains and in a matter of hours there is no sign of what happened. The message is plain: “You’re nothing new to us. You can kill us, but you can’t scare us. You can break our hearts, but you can’t break our will.”

Americans have had no experience of terrorism since the labor wars of the late 19th and early 20th centuries, and these were restricted by region and by class, touching a relative few. America’s response to terrorism from the ’60s through the ’90s only proved what poets and shrinks had long known: imagination is scarier than reality. Or, as Shakespeare’s Macbeth tells himself, “Present fears are less than horrible imaginings.” But what could not have been horribly imagined finally became reality on 11 September 2001. And America survived it. True, at first we lashed out blindly, behaving exactly as Osama bin Laden hoped we would do, damaging our image abroad and nearly bankrupting our economy at home. But then we steadied. Americans learned they could take it.

The media, terrorism’s force multiplier, of course will continue to insist we are all on edge, gnawing our fingernails, critical of everyone, demanding to know why the FBI, or President Obama, or the Russians, or somebody didn’t stop the Chechen brothers before they struck. The media folks think they are in charge of America’s emotions and it’s up to them to tell us how we should feel. Fear will keep us glued to the tube. Peddle that somewhere else, too.