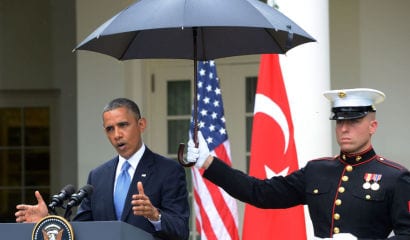 When an American compound in Benghazi was attacked last year, the Obama administration targeted a filmmaker named Nakoula Basseley Nakoula, accusing him of setting the Muslim world ablaze and then throwing him in prison. The government also pressured YouTube to remove his allegedly offensive video. After it became evident that Benghazi was a coordinated terrorist attack that had little to do with Nakoula, family members of those killed started asking for answers. Journalists reacted with a smattering of press coverage, followed by weary demands that we all move on.

But when we learned this week that the Department of Justice secretly collected two months of phone records from the Associated Press, suddenly bats flew out of hell, shrieking could be heard from distant castle towers, and Richard Nixon’s ghost was seen clanking about the White House. With one of their own under attack, the press, which was more than happy to ignore the parents of dead Navy SEALs, demanded that the Obama administration be held accountable.

“Journalism,” observed Hunter S. Thompson in Fear and Loathing in Las Vegas, “is not a profession or a trade. It is a cheap catch-all for f**koffs and misfits—a false doorway to the backside of life, a filthy piss-ridden little hole nailed off by the building inspector.” I’ve always disagreed to an extent; there are plenty of decent members of my profession, even if they’re merely exceptions to Thompson’s rule. But this week the overweening narcissism of the Fourth Estate was on full display, hoisted from the flagpole and flapping in the wind.

The press is comparing the DOJ’s actions to Watergate. That’s all well and good, but why couldn’t any of them have sent a little affront in the direction of Nakoula, who now sits in a prison cell ostensibly for a parole violation, but eminently for making a video Muslims found offensive? And if collecting phone data is Nixonian, what about when the Obama administration chucked Delphi workers off their pensions because they weren’t unionized? Or tried to obfuscate its role in the Fast and Furious operation that left a Border Patrol agent and countless Mexicans dead? Or engaged in the unprecedented persecution of leakers for years before the AP scandal broke?

Those stories were either mostly ignored or snidely dismissed as fodder for right-wing witch hunts. Only when their fellow scribblers came under attack did journalists suddenly sit bolt upright in bed. “Never pick a fight with people who buy ink by the barrel,” is a timeworn Mark Twain quote, but apparently it’s also the only rule this administration was ever expected to follow.

The AP matter is bad, and made worse by Eric Holder’s apparent decision to recuse himself from the matter and go paperless on the same day. But the real scandals here are Benghazi and the IRS’s treatment of conservative nonprofits. The latter seems to sprout a new polyp every hour. We now know that the IRS not only targeted Tea Party charities, but also conservative, constitutional, Jewish, and pro-life groups. For more than two years, the agency refused to approve any Tea Party tax-exempt applications whatsoever. Certain applications were inappropriately leaked to the left-wing news outlet ProPublica. IRS employees even tried to blackmail one pro-life group into signing a pledge not to picket outside Planned Parenthood.

On President Obama’s watch, the IRS was weaponized and used to block the growth of conservative intellectual infrastructure. This wasn’t about a couple overcaffeinated agents in the IRS’s Cincinnati office trying to adapt to an onslaught of nonprofit applications. It was a blatant attempt to stymie the spread of ideas; a very potent and unique abuse of power.

To its credit, the media, carried along by their foot-stomping over the AP scandal, is covering the IRS’s problems. This puts liberal pundits in a tough spot. They’ve spent the past three years operating with the absolute conviction that the Tea Party and House Republicans constitute a mob of Jacobins trying to destroy civil society. Now, it turns out the vandals were correct. “This has, in one seismic moment, shifted the burden of proof from the tin foil behatted to the government!” Jon Stewart screamed a few nights ago. In a stunning development, it seems the federal bureaucracy is more likely to abuse power than a group of small-business owners upset about high tax rates.

The left used to be skeptical of government power too. During the Bush administration, you were far more likely to see a Gadsden flag or a Jefferson quote at an anti-war rally than a conservative meeting. Ironically, one of Barack Obama’s biggest appeals to the left was his determination to protect civil liberties. “If Barack Obama wins in November,” gushed columnist Jeffrey Rosen in 2008, “we could have not only our first president who is an African-American, but also our first president who is a civil libertarian.”

Five years later, the noted liberty lover is presiding over a criminal IRS and doing everything to leakers short of throwing them into Guantanamo, which is still open. Liberals were often correct about their civil liberties concerns during the Bush years, and during that time conservatives became far too complacent with government power. Now, with all these scandals in the sunlight, will the left finally regain its skepticism of government? Will it pursue the Obama administration with the same zealous concern for civil liberties that it did George W. Bush?

Probably not. Prominent liberal voices from Charles Blow to Noam Scheiber have all downplayed the recent scandals. Lawrence O’Donnell doesn’t think the IRS did anything wrong. Julian Bond thinks Tea Partiers deserved to be targeted because they hate black people. A Huffington Post editor made the incredible argument that the audits were justified because the anti-tax Tea Party represents “a mass celebration of the evasion of the basic responsibilities of American citizenship.”

The time is ripe for a populist left-right alliance against the abuses of the Washington class. But the left is so animated by its hatred of conservatives that it doesn’t seem likely to play along. For the liberalism of the Church Committee and Hamdan v. Rumsfeld, this is a dismal and pathetic flame-out.

It must fall to the right, then, to keep demanding answers—and to never again lose its healthy skepticism of government. Let’s start by demanding this IRS scandal be independently investigated, from top to bottom.