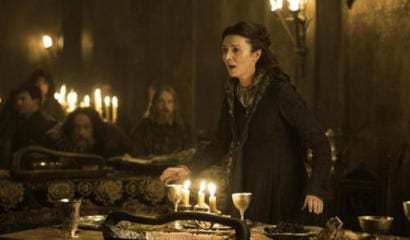 With the season finale attracting 5.4 million viewers, Game of Thrones now ranks as HBO’s second-most watched series of all time, behind only The Sopranos. High-quality acting, excellent script writing, and George R.R. Martin’s compelling storytelling have enticed a record audience. However, there is a controversial darker side to the series that has also drawn attention—namely the excessive nature of the portrayals of violence and voyeurism.

The fantasy drama series is set in a medieval time period with a feudal class system. A majority of the first three seasons focuses on the dynamic between two highborn families—the honorable Stark family, and the comparatively dishonorable Lannister family. The Lannisters hold the Iron Throne, the highest position of power in the land. Yet this season’s climactic event—the Red Wedding—effectively removed the cherished Stark family from contention for the throne by killing off its elder members.

The wedding was to be a familial and military union between the Starks and another family, the Freys. But after inviting the family of the groom, Edmure Stark, into his tower fort, Walder Frey effectively “went medieval” in the Pulp Fiction sense of the term, turning matrimony into massacre. Throats were slit, the sacred laws of hospitality and “guest right” broken, along with any hopes of retribution for the Stark family.

The infamous Red Wedding represented the largest extermination of main characters and arguably the most pivotal plot moment in the Game of Thrones series. But its depiction in the penultimate episode “The Rains of Castamere” is also indicative of the series’ distasteful trend of portraying violence for the sake of violence. I’m referring to the brutal murder of Talisa Stark, Robb Stark’s pregnant wife.

The Red Wedding triggered something akin to PTSD among loyal readers of the books. After having been nearly eviscerated, Talisa slowly bleeds to death on the ground. Yet, in the books, Robb’s wife is neither pregnant nor present at the Red Wedding. This means that executive producers D.B. Weiss and David Benioff invented her character for the purpose of overdramatizing the tragedy, of stabbing an unborn child, and not for any narrative purpose.

Weiss and Benioff admit that re-creating the Red Wedding was one of the principal reasons they wanted to produce Game of Thrones. “Getting to the Red Wedding for us was such a major milestone and such a source trepidation because I remember how it made me feel to read this thing,” Weiss said, “There’s a tremendous responsibility there to do justice to it.”

George R.R. Martin, author of the books on which the TV series is based, explains that the violence is meant to make the experience feel more realistic: “I try to make the readers feel they’ve lived the events of the book,” he told Entertainment Weekly. “Just as you grieve if a friend is killed, you should grieve if a fictional character is killed.”

But did Talisa Stark’s brutal death make the Red Wedding feel more real? I think that Catelyn Stark’s cry of anguish in the last minutes of the episode, and her expression of paralyzing shock as her son is killed in front of her, evoked enough of a “real feeling” to illustrate R.R. Martin’s point that medieval life is not fair, easy, or glorious. Talisa’s death may have satisfied the masochism of HBO subscribers, but it did not advance the plot.

This is not the show’s first offense. The executive producers often depict sex and violence for no discernible reason. Examples include Melisandre’s seduction of Gendry, Ramsay’s repeated torture and mutilation of Theon, Lord Baelish instructing lesbians on the art of sex, and the scene where Tyrion’s squire loses his virginity to prostitutes.

The executive producers invented the torture sequence and a large number of the sexual encounters. One such contrived scene depicts “Torture Porn”—two naked whores arouse Theon before Ramsay shows up with a knife ready to flay him. Yet, as Alfred Hitchcock has taught us in the climactic scene of Psycho, one does not need to show the violent act to evoke an emotional response from viewers.

Nevertheless, Weiss, Benioff, and R.R. Martin appear committed to depicting the raw reality of the medieval time period. R.R. Martin told Entertainment Weekly that while he understands the people who read fantasy novels to escape or to find comfort in the fairy tale aspect of a happy ending, “that’s not the kind of fiction I write.” Go figure.

“Killing Ned Stark was a shock, but if you look at it in a broader sense, it’s a template that many other people have done where the father figure dies and the son comes forward and avenges him. And now I was pulling the double switch: The avenging son also gets killed,” Martin said. “I anticipate a bittersweet ending [to the series],” he added. In this way, the relationship between R.R. Martin and his audience is semi-tortuous and unpredictable, which awes some fans and angers many more.

What lessons can be learned from the Red Wedding? Don’t break bread with a Bolton, and don’t feast with the Freys. The Red Wedding also reveals an underlying lesson in the series: it’s not the loving, trusting and honorable people, but rather the cunning ones with nebulous moral codes who dominate in the Game of Thrones.

Despite its overtly violent nature, season three of Game of Thrones is a masterpiece of powerful writing and acting. The Red Wedding paves the way for a new King in the North, lays the groundwork for Arya Stark’s independence, and rebalances power in favor of the ruling family, the Lannisters. We can only hope that the executive producers see fit to rein in the violence and voyeurism in favor of the narrative and character development that their audience loves so much.