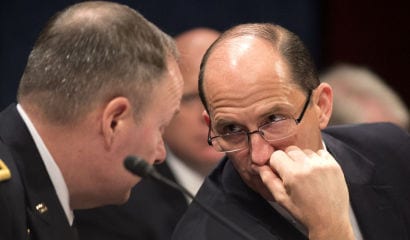 If Americans were honest, we would change our national anthem from Francis Scott Key’s “Star Spangled Banner” to Rockwell’s 1984 hit “Somebody’s Watching Me.” The lyric “can the people on TV see me” surely fits America 2013 better than a dated 1814 reference to “the land of the free.”

The news this week that governments across America have tracked and scanned tens of millions of license plates into databases shocks only in that it doesn’t shock. During the summer that we discovered PRISM, the Mail Isolation Control and Tracking program, and that the attorney general believes reporter James Rosen a “flight risk,” one comes to expect as much. Call it, in the words of the president who launched many of the surveillance state’s most intrusive programs, “the soft bigotry of low expectations.”

His successor who pledged to undo that overreach has instead doubled down on it. Barack Obama would make a lot more sense if he revealed a compulsion to impress Jodi Foster or a fascination with Catcher in the Rye. If the drip-drip-drip revelations of peeping bureaucrats have steadily desensitized us to each new exposé of a government that resembles your teenage daughter’s stalker, so too has the TMI culture.

A society of exhibitionists has invited a government of voyeurs.

It started when the Church of the Idiot Box permitted the parishioners onto the altar. Reality television arrived precisely when the number of channels exceeded the amount of content. So, people captivated by themselves imagined that the rest of us would be captivated, too. We know too much about individuals (Puck, the Kardashians, The Situation, Omarosa) we wish we had never known.

Shortly thereafter they invented Twitter for people too ugly for reality TV. I’m fairly certain the “they” foisting this on us was the National Security Agency. Voluntarily, Twittericans tell the world every inane and insane detail of their lives. I read several days of the Twitter feed of a woman I once met who was prone to thrusting especially personal details about herself and her children into conversation. Anyhow, she Tweeted such gems as “working lunch,” “just be you, the haters will hate,” and “the guys on the #bachelorette are so ugly this season.” In the spirit of 140 characters or less: who cares?

Why in the age of Facebook must the government spy on its citizens? Tens of millions of people are perfectly willing to tell you everything you want to know about them — and a few things you don’t. Users surrender the names of their associates, photographs of their activities, and even their daily whereabouts. Unfortunately, there’s no defriending Big Brother.

The four greatest words in the English language — “mind your own business” — mean nothing to anybody who makes their business everybody’s business. From sexting strangers to gossiping about the personal details of relatives on weblogs, information better left to a whisper too often comes out as a shout. Obama’s government, and increasingly Obama’s governed, can’t grasp the concept of privacy in relation to anything save for abortion.

A generation without boundaries can’t feel violated. So, the Stasi-like apparatus that has risen in America since the fall of the East German Stasi doesn’t scandalize us the way the old Stasi did from afar. Instead, many are aghast that a young man invaded the privacy of the people invading our privacy. It’s a topsy-turvy world where the government demands secrecy from the governed but citizens accept the intrusions of the state as its sovereign right. We lost our dignity before we lost our privacy.

Neighborhood watchman George Zimmerman at least watched his own neighborhood. Federal bureaucrats — the real creepy-ass crackers — imagine every phone number a party line, every address a reason for a mail cover, and every email worth BCCing themselves. What’s next? Discovering that “the people on TV see me”?

Unfortunately, what “land of the free” Americans consider an intrusion, exhibitionist America welcomes. If they can’t entice A&EMTVTLC to spy on their lives, at least they can interest FBINSACIA.