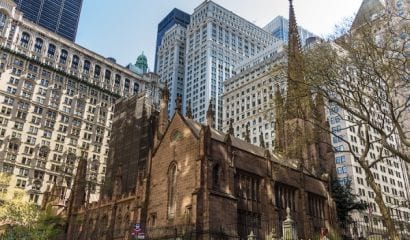 America is becoming more religiously liberal with each generation, and religious conservatives, though more numerous now, will become dinosaurs. That’s the confident projection of a new poll from the liberal leaning Public Religion Research Institute. It’s predictably gotten good media play, as claims about irrelevance for religious conservatives often do. And it supplements other polls supposedly proving the rise of the religiously unaffiliated in America.

The Left, in its alternative cosmology, believes in its own nonreligious providential destiny. But history moves in more crooked, unpredictable paths. And religious traditionalists, most of them conservative, believe that history has a another ultimately inexorable direction, guided by The Lord of history. The Left’s own more secular faith is often buttressed by short term trends.

Nearly half of the older than age 66 crowd is religiously conservative, while less than 20 percent of the under 33 crowd is. Only 12 percent of oldsters are religiously liberal while almost a quarter of the young are. So — presto — the future belongs to the Religious Left. As the much vaunted Millennial Generation ages into leadership, the Religious Right’s doom supposedly will be sealed.

This determinism of course assumes that these Millennials will not change their views as they age. And it assumes subsequent generations will not react against previous generations, even though most generations, when young, assume they are wiser and therefore must be different from their immediate predecessors. In the future, a new crop of youngsters will look somewhat smugly on the by-then aging Millennials.

At the poll’s unveiling, former New York Times religion writer Peter Steinfels readily admitted that religious liberals will not necessarily outpace conservatives in American politics. He doubted religion for liberals “can play anything like the motivating, energizing, and organizing force of religion among religious conservatives.”

The head of PPRI likewise admitted that religious progressives are a more “complicated heterogeneous group of people to communicate with and organize with.” They are less committed to religious institutions and less frequent attenders of places of worship than are religious conservatives.

Still, some media reports have latched onto the poll as evidence of the Religious Left’s ascendancy, even though the premise only works if each generation stays on the same fixed trajectory. Secular elites have nearly always reserved special contempt for religious conservatives, befuddled by their vast numbers in middle America, and miffed by their intransigence to the full liberal agenda. They never figured out how to outflank them, since most religious conservatives don’t care much about secular elites or their mockery. But this new poll gives hope that demography eventually will eradicate the dreaded Religious Right.

Their hopes will likely be disappointed. Many Millennials will become more religious and conservative as they age, especially if they marry and have children. And the subsequent generation almost certainly will rebel against their predecessor’s hipster outlook, just as diligent Generation Xers reacted against the soaring hippy activism of their Baby Boomer predecessors. Religious conservatives also have more children than religious liberals or secularists.

There is also the institutional collapse of organized liberal religion. All liberal-controlled denominations are suffering massive membership loss. Fifty years ago, one in six Americans belonged to the largest seven liberal Mainline Protestant denominations. Today it is one in 16. All growing denominations are theologically conservative, as are most thriving non-denominational congregations. Almost all the largest seminaries today are conservative. Among Catholics, young priests are decidedly more conservative than retired priests. Urban churches that attract the much vaunted Millennials are typically evangelical, not liberal.

Liberal religion is usually a reaction against trans-generational orthodoxy, not a sustaining alternative to it. In contrast, religious orthodoxy is not a guarantee of vibrancy and growth but it almost always is a prerequisite.

The next generation of religious conservatives may speak differently from yesterday’s Religious Right. But they will still be conservative and likely much more numerous than liberal counterparts. The Left often expects abstract tides of history to ensure its final victory. But religious liberals, who almost always dilute the doctrines of their faith to replace or supplement them with secular fads, usually ensure their own demise.