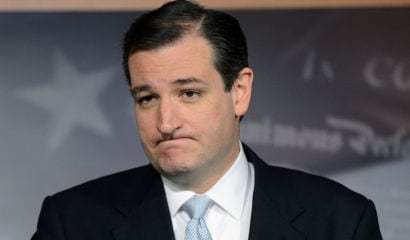 Ted Cruz is annoyed with Congress. That shouldn’t come as a surprise since, as with any decent legislator, Ted Cruz is almost always annoyed with Congress. “My single greatest frustration in Washington,” he told Time, “is in the [past] seven months, the U.S. Senate has spent virtually zero time even talking about jobs and the economy. We spent a month battling about taking away people’s Second Amendment gun rights.”

He’s right that Congress, and the Senate in particular, have neglected the economy in favor of less urgent issues like immigration and gun control. But there’s another, more specific issue – closely intertwined with both the economy and jobs – that’s been virtually absent from the conversation in Washington: the national debt.

It’s a curious oversight. The debt hasn’t exactly disappeared; the official total stands at about $16.9 trillion, and more thorough tallies put it upwards of $70 trillion. The American people are still worried about our fiscal imbalance; a Pew poll from the beginning of this year found that reducing the deficit ranked third on a list of public priorities, up 19 percent since the beginning of Obama’s first term, the biggest rise for any issue. And the news cycle has brought plenty of reminders of the deleterious effects of debt, most recently when Detroit collapsed under the weight of an estimated $18 to $20 billion in liabilities.

For much of 2010 and 2011, the debt was given plenty of prominence thanks to the ascendance of the Tea Party and a series of budget skirmishes that illuminated Washington’s infuriating inability to cut spending. Then came the 2012 election season. Mitt Romney was never an effective advocate for debt reduction, or deficit reduction, or spending cuts (or any issue, or cause, or thing, for that matter). The Democrats, hell-bent on discussing anything other than the budget, threw a series of temper tantrums over piddling issues, inventing the “war on women” and recasting Romney’s mostly spotless career at Bain Capital as an earth-shaking plutocratic stampede over the poor. The attacks were entirely predictable, and when Romney didn’t effectively respond, so was Obama’s victory.

What wasn’t predictable was that the focus on peripheral issues would continue through much of 2013. Democrats were able to leverage the Sandy Hook Elementary School shooting to demand more gun control. Many Republicans tagged along with the president’s immigration wishes in a pander-palooza to Latino voters. And to be fair, it wasn’t just frivolous issues that received attention. Conservatives, spurred by the Edward Snowden leaks, have been having a discussion on foreign policy that’s both serious and necessary.

But the result is that the national debt has been shoved on the back burner. The number of lawmakers who see anything wrong with letting the Fed administer endless quantitative easing injections, or surviving on a debt bubble that’s reached 105 percent of GDP, seems remarkably small right now.

That’s the most irritating aspect of the debt blackout: It’s caused not so much by a lack of public will, but by a political class for whom it’s very much business as usual. Immigration is held up as a national imperative not because it’s our most pressing problem, but because it’s an opportunity for Washington to Get Something Done, another notch for the president to carve on his legacy bedpost. Meanwhile the sequester, the most microscopic dent in federal spending imaginable, yielded months of infantile histrionics and predictions of Old Testament calamity, absolutely none of which have come to pass.

This mentality is fueled by the left’s attempts to discredit the case for debt reduction, primarily by having opinion columnists write the word “austerity” over and over again. There was also the case of the Reinhart-Rogoff study, or the “math error heard round the world,” as many progressives might have put it. This referred to an economics paper written by Harvard economists Carmen Reinhart and Kenneth Rogoff, which found that economies slow significantly after government debt passes 90 percent of GDP. In 2012, an error was discovered in the arithmetic. Triumphant gloating ensued, with Paul Krugman declaring that Reinhart-Rogoff “had acquired touchstone status in the debate over economic policy” and finally “logic and evidence are finally beginning to matter.”

It was the academic equivalent of erecting a scarecrow and powering up a flamethrower. Reinhart-Rogoff was never the centerpiece of the case for debt reduction, its authors aren’t clean-cut deficit hawks, and it’s hardly the only paper that’s found a link between high debt and economic slowdowns. But even if none of that were true, Krugman and Friends were still lying through their teeth about the error’s significance. As the invaluable Michael Tanner pointed out, “The UMass researchers [who discovered the mistake] did find a smaller difference in growth rates (one percentage point versus 1.3 points for the preferred median rates in Reinhart and Rogoff), but that hardly suggests that we are in dire need of more debt.” The error slightly reduced the numbers but it didn’t refute the larger conclusion.

Another supposed knock against debt reduction is that, as President Obama has pointed out, the deficit is falling at the fastest rate since World War II. This is true thanks to a combination of faster-than-expected economic growth and projections of increased tax revenue that may or may not pan out. But we’re building off of extremes here—the 2009 deficit was the highest in history and economic growth has been pitifully low. Eventually there was going to be some movement in the right direction.

And the notion that a little projected deficit reduction obsolesces the anti-debt argument is ludicrous. As one economist told Politifact, “The future path is not captured in snapshots of what happened over the past few years. It ignores the unsustainable debt trajectory the country still faces.” Arguing that all is well with massive, long-term debt on the basis of a few years of deficit reduction is like trashing your umbrella and dismantling your roof because it’s slightly less cloudy today than it was yesterday.

But such is the debate in Washington, where everything is the on the table except cutting back, and any attempt to ameliorate the debt is immediately assumed to be cover for an elaborate operation to truck senior citizens over the side of the Grand Canyon. Maybe we should reduce the debt many, many decades down the road. But first we need more stimulus. And immigration reform. And background checks on firearms. And has anyone stepped outside recently? It’s kind of warm out. We should probably do something about climate change. Anything, really.