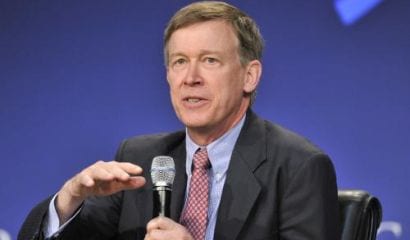 As one Twitter user put it, “Big Gulp THAT, Mayor Bloomberg!”

Despite hundreds of thousands of out-of-state dollars, including a reported $350,000 from the nanniest of the nanny-staters, poured into defending two Democratic Colorado state senators in historic recall elections, both Senator John Morse (CO Springs) and Senator Angela Giron (Pueblo) were recalled on Tuesday night in Colorado’s first-ever legislative recall elections.

It is difficult to pin down just what was spent and by whom in these races, but a reasonable guess is that the anti-recall (which is to say Democrat, anti-Second Amendment, Bloomberg pawns, etc.) efforts outspent the pro-recall side (which included the NRA) by at least two-to-one., with some suggesting the gap was as much as six-to-one. In Colorado, the American Federation of Teachers wasted $25,000 of their members’ money in defense of Morse and Giron — no doubt for the children.

As Colorado Peak Politics put it, “Giron’s group… is running TV ads during NFL games, while the ads for Victor’s (pro-recall) group are running at midnight during re-runs of ‘Dog the Bounty Hunter.’”

Senator Morse conceded at about 9:15 PM; about an hour later, the El Paso County Clerk posted the final results of 51% “Yes” (for the recall) to 49% “No,” making Morse the first legislator recalled in the history of Colorado. This scalp is all the more significant because Morse is — make that was — president of the state senate.

In Pueblo, the “Yes” vote to recall Sen. Giron trounced the “No” vote by a 56% to 44% margin, a remarkable result in a district that has nearly twice as many registered Democrats as Republicans and where Giron beat her Republican opponent by almost the same margin in 2010. Clearly, Pueblo’s rural and blue-collar character makes it not a very safe place for elitist gun-haters who are transparently manipulated by out-of-state puppet masters.

The Giron recall is also notable for its utterly grassroots nature, being started by Victor Head, a 28-year old tattooed, bearded plumber who had decided he’d just had enough of our state government’s petty tyranny. One wonders if Victor may run for office himself one day, sort of a Colorado version of Joe the Plumber.

It also didn’t help Giron that the Republican on the ballot to replace her, George Rivera, is a former Pueblo Deputy Police Chief and a former Democrat, who was born to an (at the time) illegal alien mother (who is now an American citizen).

Democrats, having nothing positive to say for themselves, tried — especially in the Morse race — the “war on women” tactic, saying that Bernie Herpin, the Republican who will replace Morse, “supports a plan that would deny women access to common forms of birth control.” (Those mailers came from the group who received the donation from the teachers’ union.) Perhaps Democrat distractions have overstayed their welcome here in Colorado.

The entire recall process was plagued by legal challenges, delays, confusion, and shenanigans, mostly caused by an election law championed by (former) Senator Giron which was seemingly designed to maximize voter fraud. It was rammed through the legislature on a party-line vote, with Democrats refusing to get input from Secretary of State Scott Gessler (because he’s a Republican) even though he is an attorney, expert in election law, whose office oversees elections in Colorado.

Jon Caldara, the President of the Independence Institute, made a much-deserved mockery of the Democrats’ law by renting an apartment for a short time in Colorado Springs and stating his “intention” to move there from Boulder so that he could vote in the Morse recall. (Caldara cast a blank ballot; his point was about the election law more than the recall itself.)

While Governor John Hickenlooper was relatively quiet during the recalls, he can’t escape the stench of the Democratic over-reach which he abetted and which has him tied with at least one Republican challenger, at less than 50 percent support — a very weak position for an incumbent (and former mayor of Denver, the state’s capitol and largest city).

Unfortunately for those who care about good government in the Centennial State, Colorado has a governor who, like Morse and Giron, ran as a moderate but has governed over the past year as a radical Bloomberg-owned leftist, and Democrats will still hold a one seat majority in the Colorado State Senate after these two recalls while also having the majority in the state House of Representatives. However, there are one or two moderate Democrats in the senate who represent swing districts and who may be swayed to oppose next year’s various radical liberal proposals if only to save their own skins, after seeing what happened to Morse and Giron.

This year, Governor Hickenlooper, who is actively involved with Bloomberg’s “Mayors Against Illegal Guns” (perhaps the single biggest organizational loser on Tuesday), signed every liberal anti-gun law, passed radical environmentalist legislation to raise the cost of electricity in rural Colorado, and gave a reprieve to a man who murdered four people in a Chuck E. Cheese restaurant. He may urge his fellow Democrats to temper their far-left agenda in 2014. But Coloradoans won’t forget who this man really is.

With the wind at our backs, and despite several years of being trounced by Democrats, Colorado may be looking at a brighter, more prosperous, more liberty-oriented future with a government of people who represent us rather than Michael Bloomberg, other unwelcome out-of-state nannyist special interests, and a small handful of deep-pocketed liberals here in Colorado who have gotten accustomed to (legally) buying elections. However to repeat the recalls’ successes, the state GOP must learn Tuesday’s lessons of better organization, better messaging, and better connection to moderate voters (while maintaining conservative and free-market principles.) We have been reminded of what’s possible even in this purplest of states.

Liberals should, and probably will, learn that the new third rail of politics is our 2nd Amendment rights, especially in historically and culturally gun-owning areas. And they should also recognize that haughtiness — such as former (I just love saying that) Senator Morse’s appearance on MSNBC in which he decribed urging his Senate Democrat colleagues not to listen to their constituents — doesn’t sell around here.

For those Democrats who still don’t believe that they can be beaten in 2014 (even if they outspend their opponents, lately a given in Colorado politics), Victor Head’s Tuesday night “last laugh” should be posted on their office walls: “Senator John Morse said that an unemployed plumber started this. Who’s unemployed now?”