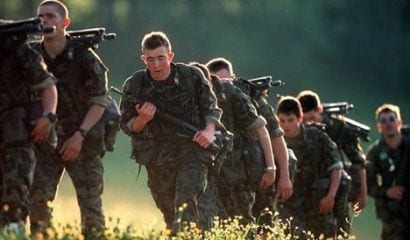 For four years the Obama administration ignored the issue of gun control, seeing it as a political loser. However, the tragic school shootings in Newtown, Connecticut created an opening for those who long sought to restrict gun ownership. Yet Congress should look before it legislates, since gun rights generally correspond to the liberties fundamental in a free society.

Four years ago Dave Kopel of the Independence Institute, William & Mary economist Carlisle Moody, and author Howard Nemerov published an article assessing the relationship between guns and freedom (“Is There a Relationship Between Guns and Freedom? Comparative Results From 59 Nations”). Coming to a simple conclusion is impossible: guns are widely accessible in Israel, Switzerland, and U.S., as well as Lebanon, Ivory Coast, and Somalia.

Naturally, the United Nations was on the case before President Barack Obama. In 1999 UN Secretary General Kofi Annan contended that widespread firearm ownership has “damaged development prospects and imperiled human society.” More recently the global organization has been pushing an international convention — so many trees have given up their lives on behalf of UN negotiators! — to regulate the international trade in small arms.

The three researchers found that data on gun ownership wasn’t easy to collect. For instance, Great Britain banned handguns, using registration lists to confiscate outstanding weapons. No surprise, Britons have resisted these efforts by lying to their government. Noted Kopel, Moody, and Nemerov: “The English tradition of hiding guns from the government dates back to at least 1642.”

Americans also lie, even to pollsters seeking to survey gun ownership. The authors suspect that some Americans may be protecting their privacy. In other cases “the owner may fear that the survey data might be given to the government, and would be used against her if she did not comply with a gun confiscation law enacted sometime in the future.”

There almost certainly are more guns in circulation in America than there are Americans. If the number is seriously undercounted, the practical obstacles facing any serious gun control would grow dramatically.

In any case, Kopel, Moody, and Nemerov do their best utilizing indexes on political liberty, corruption, and economic freedom. They find that countries with significantly higher gun ownership have greater political and civil liberties. The political freedom index (from “Freedom in the World”) is compressed, making analysis difficult. Nevertheless, noted the researchers, “the average of the countries in the first quartile is ‘free,’ while the average for all other quartiles is ‘partly free.’”

Finally, nations where people own more firearms also tend to have greater economic liberty. The differences are limited — after all, it’s hard to find a nation today where government doesn’t intervene promiscuously in the economy. Leftist cant about “laissez faire” notwithstanding, even the U.S. went far down the statist path long before Barack Obama was elected president. Still, the difference matters.

When it came to political liberty, Kopel, Moody, and Nemerov found that the countries in every quartile averaged a rating of “moderately free.” There was a certain self-selection bias to the data: Only 59 countries had gun registration figures, and they were most likely to be relatively freer than nations without comparable numbers.

Still, the authors reported: “the first quartile had the highest average, but not quite 70, which is the threshold for ‘mostly free.’ For all three indices of liberty, the top firearms quartile rates higher than every other quartile.”

Similar results were found when the three researchers ran the numbers per quintile. The authors found: “When we looked at the countries with the most guns, we saw that they had the most freedom as measured by the liberty indices, but the relationship was only pronounced for high-gun countries. There was no difference between medium-gun and low-gun countries.”

The article then flipped the analysis around to look at gun ownership in the nations which enjoyed the greatest liberty. Kopel, Moody, and Nemerov found that “the freest countries… had the highest density of civilian firearms, and averaged the best” corruption scores. Moreover, “’Partly free’ countries had much lower ratings in all indices than all ‘free’ countries. ‘Not free’ countries had the poorest scores.” Finally, among the freest nations, “higher levels of corruption and lower levels of wealth may have a significant inhibiting effect on gun ownership.”

There’s quite a mix of countries, of course, and some relatively free societies allow little gun ownership. Correlations are imperfect while causations are difficult to demonstrate. Nevertheless, the three researchers found that the relationship between more guns and both economic liberty and corruption to be statistically significant.

The authors run through several possibilities. Freedom obviously can yield greater gun ownership. For instance, “Political systems that are more open may allow people who own guns, who want to own guns, or who want other people to have the choice, to participate more effectively in the political system, and to have their concerns addressed.”

The authors point to how firearms can help minorities within nations: decades ago “American civil rights workers were able to protect themselves from the Ku Klux Klan because so many civil rights workers had guns.” Kopel, Moody, and Nemerov also theorize that “the exercise of one right may, for some persons, foster more positive attitudes about rights in general.”

There are contrary arguments, of course — in some countries, particularly failed states, guns may exacerbate violent chaos. Even in Great Britain, Kopel, Moody, and Nemerov write, “gun culture is an epithet” for conditions that may damage a nation’s freedom. However, in the U.S. “gun culture” means something very different: “images such as father taking his son on a hunting trip, or of young people practicing target shooting with .22 smallbore rifles, under the supervision of expert marksmen at a gun club.” For most Americans, gun possession and use is a symbol of individual and social responsibility.

Kopel, Moody, and Nemerov are serious researchers who do not offer a slam-dunk for the right to own firearms. The three admitted: “there are many casual mechanisms by which guns and freedom can advance or inhibit each other.” However, there is strong evidence that gun ownership is related to freedom. That suggests taking “more sophisticated, carefully tailored approaches to gun policy, that attempt to address the negative effects, and that are careful not to reduce the apparently significant positive effect.” The latter point — the “significant positive effect” — deserves repeating.

Tragedies like the Newtown murders reflect human evil, not gun ownership. There are legitimate issues — how to better keep guns out of the hands of those who are dangerously mentally ill, for instance. But that effort must not become an excuse to disarm the responsible and law-abiding. No less than our basic liberties are at stake.