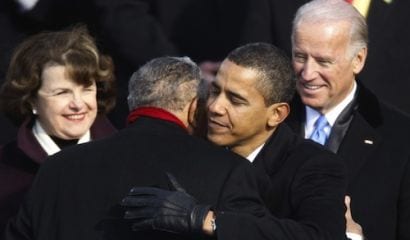 While John McCain was playing kissy face with John Kerry in Kerry’s confirmation hearing, Dianne Feinstein was pushing gun control, Obama was planning immigration legislation, and Leon Panetta was lifting the ban on women serving in combat. There was so much SGO in Obama’s full court oppress last week, we need to take some time and sort it all out.

(For those just joining us, “SGO” is an acronym for “s*** going on,” a comprehensively useful term coined by former SEAL Al Clark.)

If John Kerry were Barry Obama, he’d spend the next four years blaming his predecessor for the sorry mess the world is in that he’s inheriting from Hillary Clinton. But after Hillary’s bravura performance in last week’s Benghazi hearing, Kerry should ask her for a tutoring session. Clinton, claiming responsibility for the Benghazi disaster, then denied knowledge of or involvement in any aspect of the attack, saying that someone else had knowledge of and responsibility for the long list of errors that ended with four dead Americans. It was the best performance since her best pupil claimed he “didn’t have sexual relations with that woman, Ms. Lewinsky.”

Kerry will also find the double Islamic play combo — from Afghanistan to Libya to Mali — somewhat difficult to deal with. Kerry said that he wanted to focus on global warming so he’ll try to ignore the effects of Obama’s ill-advised intervention in Libya which has so far resulted in terrorists being armed all across northern Africa with arms flowing from Libya’s arms caches. Vichy John Kerry may again find common cause with the French intervention in Mali, another comprehensively bad idea. He and Chuckie Hagel will get along just fine, giving gifts to our Islamic enemies such as the twenty F-16s we’re giving to Egypt’s president Muslim Brotherhoodlum Mohammed Morsi.

Sen. Ron Johnson (R-Wisc.) was brave enough to ask Hillary about the abject lies she, Obama, and UN Ambassador Rice spread by insisting for weeks that the attack on the Benghazi consulate was a spontaneous demonstration against an obscure anti-Islamic video. But Hillary was prepared with righteous indignation and even tears. She shouted back at him, “What difference at this point does it make?”

None whatever, except that another chance was lost to hold Team Obama responsible for its manifest errors. But, as usual, Johnson and the rest of the Republican senators were less tough and resolute than Clinton. Part of their irresolution may reflect the fact that they came to the hearing fresh from their party’s annual “retreat” in Williamsburg, Va. Subsequent to the retreat, Speaker Boehner’s statement that Obama was trying to annihilate the Republican Party resulted in the RNC’s decision to decamp from his D.C. headquarters to permanent positions in Lord Cornwallis’s former entrenchments in Yorktown, Virginia. The RNC is rumored to be asking the French government for the architectural drawings for the Maginot Line.

Meanwhile, Beyoncé apparently lip-synched the national anthem at Obama’s inauguration, to the dismay of the Marine Band. Later in the week, while announcing an appointment, a housefly buzzed persistently around the president’s head apparently detecting food content in Obama’s words.

The White House flies were apparently dealt with before Obama’s interview aired last night, side-by-side with Hillary, to praise her performance as secretary of state. The only fly buzzing around was Joey Biden, kept outside the room, who may have lost his shot at the 2016 presidential nomination with Obama’s praise of Clinton.

Late in the week, the U.S. Court of Appeals for the D.C. Circuit threw out Obama’s “recess” appointments to the National Labor Relations Board because they were made when the Senate wasn’t in recess. The court’s action invalidates about 300 NLRB rulings over the past year as well as rulings by the Consumer Finance Protection Board which is chaired by another Obama “recess” appointee, Rich Cordray. This will rein in Obama’s appointments because he — and future presidents — can’t decide for themselves when the Senate is in session or not. (Just for laughs, constitutional law expert Obama might want to re-read Article 1, Section 5 of the Constitution which says that the House and Senate make their own rules and procedures, which means they decide when they’re in session or not.)

Sen. Dianne Feinstein (D-Cal.) led her gun controllers to the podium to push her new version of the “assault weapons” ban. Her bill, as I pointed out a few weeks ago, is probably unconstitutional as Justice Scalia’s opinion says in the Supreme Court’s D.C. v. Heller decision.

In an effort to show how reasonable her approach is, DiFi’s bill lists hundreds of weapons that aren’t banned. I’m sure that the Holland and Holland people, makers of some of the world’s best shotguns, are relieved to see that their “Royal Series” of elegant shotguns — each of which costs upwards of $100,000 — aren’t banned. I’m waiting for a stimulus program that will entitle each gentleman shooter to buy a pair at government expense.

For example, the bill bans guns such as the Ruger Mini-14 and Remington 870 shotgun if they have folding stocks or pistol grips, but not if they don’t. The fact that they’re functionally identical with or without the scary-looking “military” features is irrelevant to DiFi. And anyone who knows how to use a screwdriver can change one configuration to the other with readily available parts.

Some of the gentlemen shooters who know how to do that — special operators in the SEALs, Green Berets, and Marine Force Recon — are pretty angry at the women in combat policy announced by Defense Secretary Leon Panetta. I’m getting some pretty strong feedback which isn’t quotable in a family publication.

The Marines, from what I hear, are also pretty angry about this. Look for a series of resignations and a decrease in re-enlistments as the women in combat deal policy holds. A lot of real warriors are going to conclude that there’s no reason for them stay in the service. Though the full effects won’t be known until a combat unit with women has to fight an enemy hand to hand, the new policy will, over time, cost many lives and severely damage our ability to fight without sacrificing a lot of our troops’ lives.

Tomorrow, Obama will begin the week’s SGO with his announcement of an immigration “reform” which, according to his favorite Republican John McCain, will be just like the one McCain tried to push in 2007. It will include a path to citizenship for illegal aliens and a lot more. Look for an early surrender by the Maginot Republicans in the Senate.

While we’re preoccupied — again — with immigration “reform,” Iran is busily propping up Syria, Israel’s red line on Iran is rapidly approaching, Hugo Chavez’s impending death will unravel his oil money-funded control of neighboring nations, and Republicans are kicking the can down the road — again — on the debt ceiling. Team Obama will be reinforced by Kerry, Chuck Hagel, and John Brennan after some senatorial huffing and puffing on their nominations.

The Washington Post is doing yeoman’s work, one op-ed yesterday claiming that Obama’s agenda isn’t really liberal. In two weeks, Obama will deliver his State of the Union speech, which is going to demonize every Republican idea. As much as we would love to have one day off from the news, the flow of SGO is going to get a lot faster and deeper.