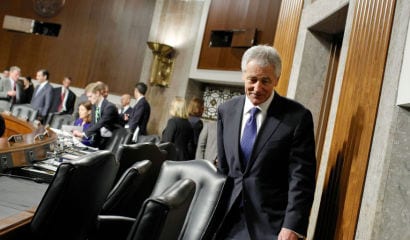 Hagel’s test was to explain away a checklist of objectionable things he’d said or supported. How’d he do? Not terribly, but worse than I’d expected. It was the performance of someone who was accustomed to speaking off-the-cuff and was forced to restrain himself. Thus he bumbled on Iran, sounded mealy-mouthed on his opposition to the surge, and wilted under several pointed lines of questioning.

A revealing moment came when he was asked about his comment that “the Jewish lobby intimidates a lot of people up here” into doing some “dumb things.” Hagel quickly apologized. “I should have said pro-Israel lobby,” he admitted. And replaced “intimidated” with “influenced.” And omitted the word “dumb.” It was a lot of hemming for one remark.

Thanks to gaffes like that, critics have spent the past month hurling overcooked accusations that Hagel is anti-Semitic. He’s not. But he is guilty of letting his mouth get ahead of his head. I was there in 2008 when Hagel made one of his more unfortunate gaffes. Asked about Alan Greenspan’s recent comment that the war in Iraq was being fought over oil, Hagel exclaimed, “Of course we are! They talk about America’s national interest. What the hell do you think they’re talking about? We’re not there for figs.” My memory of the incident isn’t perfect, but I remember him reacting like a snapping turtle, jumping on the question with little thought or consideration.

That’s Hagel’s default mode, tough and reactionary, angry about war. That anger occasionally leads him to say things that are extreme. But it’s also backed up by a pugnacity that President Obama wants. Since taking office, the president has been locked in a passive-aggressive dogfight with his generals. “The struggle between the White House and the Pentagon,” noted Rolling Stone in a revealing 2009 profile, “is an important test of whether the president can take command in a political storm that could tear his administration apart.” The public brouhaha over General Stanley McChrystal, fired by the White House after joking about members of the administration, was just one battle in this bureaucratic war.

Obama wants a more restrained military. In Hagel, he’ll have someone who’s been in combat, shares his views, and, above all, will aggressively enforce his agenda. The president intends to stick it to the Pentagon brass, and Hagel’s his man for the job.

In this sense, Hagel’s symbolic importance is enormous. He represents a turning point, away from the interventionism of the Bush years, and towards a new era of austerity, where the military isn’t sacrosanct and cuts to its budget are real.

Hagel also symbolizes questions haunting conservatives. Should they cling to the foreign policy idealism of the Iraq war? Or should they set all that behind them, accept that the Bush years were a wrong turn, and start treating the Pentagon like just another government agency to be downsized? Or is the solution somewhere in the middle, perhaps supporting targeted Pentagon cuts while getting hellishly tough on Iran?

Ultimately though, none of this symbolism really matters. Senators can harrumph all they want, but barring some sudden Democrat revolt, Hagel is going to be confirmed. And Hagel can harrumph all he wants, but deep military cuts are going to take place. Republicans, most notably Rep. Paul Ryan, are coming to accept the sequester, which would slash $500 billion from defense over the next decade. And even if we dodge the sequester, we have $16.5 trillion in national debt. Eventually the Pentagon will have to be trimmed.

Conservatives should focus on lopping off the right branches. Sen. Tom Coburn recently released an excellent report detailing $68 billion in defense cuts, including money wasted on wind turbines and other renewable energy nonsense. The right should demand that those green projects go first, followed by duplicate programs and other consequences of Pentagon bureaucracy. This is the fight to be had.

Hagel reveals the president’s foreign policy intentions. He confronts conservatives with questions about our ideology. But ultimately, he’s an ephemeral symbol of a change that can’t be stopped.

Cuts are coming to the Pentagon. Now the question is: Where do they begin?