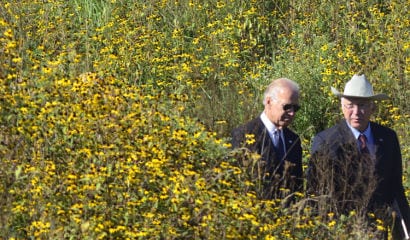 Well, President Obama is going to do just that in short order because Interior Secretary Ken Salazar recently announced that he’ll be stepping down in late March after serving Barack Obama in that capacity for the president’s entire first term.

Like Bill Clinton’s Interior Secretary Bruce Babbitt, who cynically used the 1906 Antiquities Act to help his boss create sixteen new national monuments, Salazar has not earned the affection of Western Republicans. “Secretary Salazar was not a friend to my home state of Utah or other public lands states for that matter,” Rep. Rob Bishop, chairman of the House subcommittee over national parks and public lands, told the Salt Lake Tribune. “Under his watch, the Department of the Interior sought to impose historic new limits on access and multiple use of our nation’s resources and worked aggressively to hinder certain types of domestic energy production.”

Salazar began his tenure in 2009 by killing 77 energy leases on Bureau of Land Management (BLM) parcels in Utah, hence Rep. Bishop’s opprobrium. Leases in the Gulf of Mexico following the 2010 BP Deepwater Horizon spill have been slow to be approved. The controversial Arctic National Wildlife Refuge (ANWR) remains closed to energy development. And as of May 2012, new “fracking” regulations affecting the nationwide natural gas industry are in place.

Traditionally, the Interior cabinet post goes to a Westerner of the sitting president’s party, many times a governor or ex-governor (Kempthorne and Babbitt are good examples), and one certainly familiar with the Interior Department’s purview of a half billion acres of federal public land, most of it in the West. Interior oversees the National Park Service (NPS) and its 59 national parks, including Yellowstone and Yosemite; the Bureau of Land Management (BLM) and its quarter of a billion acres devoted to grazing, recreation, and energy resources; the Bureau of Reclamation (BuRec), and its 180 dams/reservoirs; the U.S. Fish and Wildlife Service (USFWS); and the Bureau of Indian Affairs (BIA), serving 566 native tribes on 310 reservations amounting to 55 million acres. A total of 54,000 employees covering all agencies. Here are a few likely candidates for the wide-ranging post, based on my reading of the western press. They are all Democrats.

Brian Schweitzer, the recently term-limited Montana governor (2005-2013), is an ex-agronomist with little public lands experience other than reacting to federal policy when he occupied the governor’s office in Helena. Schweitzer supported Montana Senator Jon Tester’s so-far failed Forest Jobs and Recreation Act, which would have designated as wilderness 600,000 acres of federal land in Montana, along with 100,000 for small-scale selective logging projects designed to battle bark beetles and improve forest health. But the latter proposal was seen by environmentalists as a bouquet to the timber industry, leaving both Tester’s and Schweitzer’s green credibility suspect. Though given President Obama’s hostility to coal production, Schweitzer’s main negative might be his public cheerleading for Montana’s “clean coal” (an oxymoron on the green left) industry. Media outlets such as 60 Minutes have branded him “The Coal Cowboy.”

Ex-Wyoming governor David Freudenthal shares some aspects of Schweitzer’s résumé. Both served conservative red state constituencies as “NRA Democrats” (though currently that label might work against them). Previous to serving as the Cowboy State’s chief executive (2003-2011), Freudenthal was appointed U.S. Attorney for the District of Wyoming (1994-2001) by President Bill Clinton. While governor, Freudenthal supported Wyoming’s oil and gas industry, its tax revenue for years ensuring that state government in Cheyenne ran a perennial surplus. And for a Democrat, Freudenthal came down on the “right” side of the now eighteen-year-old wolf issue, supporting “predator” status; that is, wolves are now legally hunted in some parts of the state, and simply shot as a danger to livestock in others. Wolf advocates decry this dual policy, and it is the subject of continuing litigation.

Byron Dorgan, the recently retired Democratic senator (1992-2011) from North Dakota, served on numerous public lands-related Senate subcommittees, including Energy and Water Development (chairman), and Interior, Environment and Related Agencies. Also subcommittees on Energy and National Parks, and the Committee on Indian Affairs. Dorgan also served in the U.S. House (1981-1992), working on many of the same issues. Dorgan’s main liability in President Obama’s eyes could be his involvement in the 2005 Jack Abramoff scandal, when the North Dakota senator returned questionable campaign donations that had originated with some of Abramoff’s clients.

Raul Grijalva, a Democratic congressman representing Arizona’s 3rd District (Grijalva represented Arizona’s 7th from 2003 to 2013; the district was renumbered following redistricting after the 2010 Census, and in the current term it’s now the 3rd), was on the short list in 2008, when Ken Salazar got the nod. Grijalva is the most radical green of the aforementioned group, and in 2008 had the support of 130 national and local environmental groups. He serves on the House subcommittee for National Parks, Forests and Public Lands. Grijalva was a prominent voice in Congress calling for more congressional oversight of the oil industry following the Deepwater Horizon spill. He is no friend of the oil and gas industry.

Other names farther down the list are ex-Washington governor Christine Gregoire; ex-Washington 6th District representative Norman Dicks; and Sally Jewell, the CEO of the outdoor gear giant “Recreational Equipment, Inc.” (REI). The latter has no experience in public service.

My picks are Dorgan, based on experience; or Grijalva, if Obama seeks to truly radicalize the Department of the Interior. That would be the same Grijalva who not long ago called for a tourist boycott of his own state.