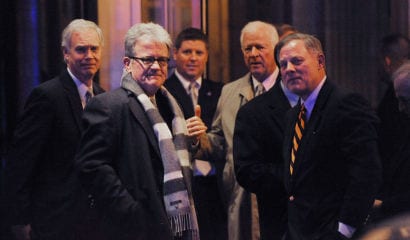 What could be more out of character for President Barack “I’m not a dictator” Obama than sitting down for a nice meal with a dozen Senate Republicans?

But that’s just what happened on Wednesday night at Washington, D.C.’s Jefferson Hotel where, over foie gras and lobster, the power elite spoke about what Washington will do next to the rest of us.

RINOs-in-chief John McCain (AZ) and Lindsey Graham (SC) were there (hours before they took to the Senate floor to disgracefully attack Rand Paul), along with more stalwart sorts such as Pat Toomey (PA) and Senator Ron Johnson, a Tea Party businessman from Wisconsin who is the best senator nobody’s ever heard of.

And on Thursday, President Obama had a “constructive” lunch with House Budget Committee Chairman Paul Ryan (R-WI), with the committee’s ranking Democrat, Chris Van Hollen (MD) also there to enjoy the lentil soup and sea bass. (No lobster for Congressmen!) According to the Washington Post, “Topics included tackling the deficit and the president’s proposal to replace the sequester with a deficit reduction package that includes tax increases.” I wonder if Ryan was able to enjoy his lunch hearing Obama’s typical economic idiocy, which could make even the finest occasion seem simultaneously bland and sour.

But why is this happening?

Barack Obama and his fellow Democratic petty tyrants are (in)famous for going it alone, thinking that narrow election victories mean they have total control and free rein to trample the minority.

Obama is pretending to play nice because he, for one of the few times during his presidency, feels weakness.

The sequester debate was a debacle for him, with even liberal media outlets and comedians making fun of the administration’s Chicken Little attempts to induce panic among Americans.

This just days after left-leaning newspapers (including the New York Times editorial page) and blogs raised obvious ethical questions about Organizing for Action, the former Obama campaign organization, offering access to the president for half-million dollar donations to their hypocritical hate-the-one-percent coffers. (On Thursday, OFA said it would not take money from corporations, lobbyists, or foreigners, but I’m sure the SEIU and George Soros remain welcome.)

The theme of Obama as non-leader is percolating through society with Fox News’ Brit Hume calling the president’s sequester-related antics “the most peculiar behavior I have ever seen by a president.”

In Gallup’s daily tracking poll of the president’s approval ratings, the most recent data shows the first drop below 50% since September.

Obama’s obvious lack of ability to lead, or even interest in leading, further highlighted by his playing golf while his henchmen were playing up supposed sequester devastation, must be showing up in the administration’s internal polling as well.

The Obama team nervously recognizes that the Teflon is being scraped off this ultimate non-stick president. And while Obama did have low approval numbers during much of his first term, he never seemed to believe (nor did political betting odds say he should have believed) that those numbers would translate into electoral defeat in 2012. But this time feels different, not least because the president’s remarkable change of behavior seems to acknowledge a transformation of the political environment.

One might suggest that Obama simply wants to try a new way of governing, that he really does want to get along with the opposition. But that belies everything we know about the man. He has the character of a tyrant, and never cooperates with anyone but his most loyal subjects… and I do mean subjects.

In short, the Wednesday dinner smells (over the lobster) like fear. Fear by Obama that the public may be, even if extremely slowly, catching on to who and what he really is. Fear that demonizing the Republicans for everything is no longer a workable tactic after so overplaying his hand on the sequester. Fear that his dream of taking back control of the House of Representatives, even though the election is nearly two years away, may already be slipping through his fingers.

Now let’s talk about the Republicans. They were absolutely right to accept the invitation to dinner with the president. It is good politics and at least offers an opportunity, however remote, for better governing than we’ve had in the last few years. But they need to recognize and take advantage of the president’s implicitly admitted weakness.

The image of the dinner will make claims of the Senate GOP being obstructionist slightly harder for Obama to prosecute, though he will certainly continue with that line of attack whenever he thinks it might help him.

While it is unlikely that anything said by the most pro-liberty attendees such as Senators Johnson and Toomey actually penetrated Barack Obama’s consciousness, blockaded as it is by a force field of intense statist ideology and Keynesian econo-ignorance, anything that helps the two sides understand each other better — even as people rather than simply on a policy basis — is an exchange worth having.

But Republicans should remember that this president has demonstrated an approach to political debate much like the Qur’an’s approach to honesty: it is permissible to lie to those not already of the faith (leftist in one case, Islamic in the other) in order to further the cause. The Qur’an says that if your intention is the furthering of Islam, “Allah does not call you to account for what is vain in your oaths.” Similarly, neither the “mainstream” media nor most Obama voters will take Democratic politicians to task for prevarications, lies, and all sorts of shenanigans (remember “deem and pass”?) if done in the name of liberalism.

Another Islamic lesson which Republicans, who have been outmaneuvered by Barack Obama far too often, should keep in mind: The Qur’an says that believers should only have friends among unbelievers for the purpose of “guarding” against them, as a form of security, much like Michael Corleone’s sage advice to “keep your friends close, but your enemies closer.”

The senators who broke bread with Barack Obama must never forget that to him, they are the enemy. Not the loyal opposition. Not people with an honest disagreement. Not negotiating partners. The enemy. To be manipulated until they can be finally and permanently defeated.

After the meal, Senator Lindsey Graham encouraged Barack Obama to continue the conversation, raising the image of Ronald Reagan reaching out to Tip O’Neill. An important difference, however, is that Obama is not reaching out to congressional leadership but rather to rank and file, perhaps hoping to peel some votes away from Senate Minority Leader Mitch McConnell (R-KY) and Speaker of the House John Boehner (despite Boehner’s being perceived by many conservatives as already too willing to compromise.)

One wonders whether a sincere effort to work with Senate Republicans would include GOP leadership, yet not one of the five senators listed as GOP leadership on the Senate’s web page was invited to the meal. Particularly knowing this president’s history, the Wednesday fine dining and Thursday’s Ryan repast are more likely political tactics and photo-ops than an honest change of heart or mind.

There is good news: On Wednesday, for the first time in his public life, President Obama decided not to stick other people with the costs of his living large. And in case you had briefly forgotten just whose side the press is on, both the CBS News and NBC News websites led the dinner story with the headlines “At GOP outreach dinner, Obama picks up the tab” and “Reaching across aisle, Obama picks up tab at dinner with GOP.” Oh, the humanity.

And in another first for his presidency, Barack Obama seems to have found a fairly good deal: The prix-fixe dinner at Plume is only $85, plus a $5 supplement for the foie gras, quite a bargain for a fine meal in Washington, D.C. But then, spending one’s own money rather than everybody else’s does tend to instill a little discipline, doesn’t it, Mr. Obama?