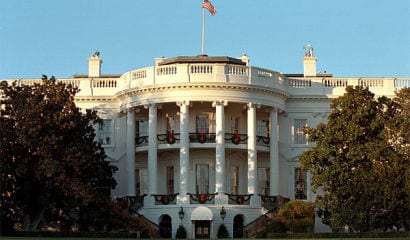 And just what is the Obama White House hiding in this business of stopping White House tours?

That would be Fox’s Eric Bolling, who gets immense credit for stepping up to the plate and getting the ball rolling on paying for White House tours. The Twitter hash tag is part of his drive to get the Obama administration to resume White House tours halted, according to White House press secretary Jay Carney, because of the sequester.

Appearing on Fox and Friends yesterday morning, Bolling held up a sign with “#OpenOurWH@ericbolling” and said “I think we’re gonna get ’em open.…They’re hurting the kids to make a cheap political stunt…”.

It is a cheap stunt. Cheaper than you know, more of which in a moment.

In addition to Sean Hannity joining the fight — Hannity had quickly tweeted his support (“@seanhannity.@ericbolling great idea! Count me in, I will pay for a week also!”) while Bolling was still on the air of his show The Five where Bolling made his original announcement — Donald Trump has now signed up. Suggested by Newt Gingrich, once Trump became aware of what was happening the billionaire mogul said: “Why not?”

The U.S. Secret Service told CNN Thursday that the plan will help the agency save $74,000 per week — or $2 million in the next seven months. That’s how much it costs to pay 37 uniformed officers $50 an hour for 40 hours a week to secure the tour’s route through the East Wing.

“My guess is that it’s not,” he said in the daily briefing. “The reason for that is that the sequester mandates across the board, non-strategic, indiscriminate, cuts to the budget. It allows very little, if any, flexibility.’”

The White House has just made another mistake — well aside from closing the tours in the first place.

How about not exactly telling the truth here.

But the White House?

No. You are not seeing “the White House.”

What the Obama administration is not telling Americans being denied these tours — hey, why be helpful to folks when you can both ignore Eric Bolling Sean Hannity, and Donald Trump while scoring some cheap political points at the expense of the kids? — is this:

And for an administration that loved to boast of its ties to the late Senator Ted Kennedy, the Obama administration should know better. And surely does.

But here’s the facts for the rest of America.

When Jacqueline Kennedy became First Lady in 1961, she was appalled at the condition of the White House. Finding it filled with what her friend and JFK aide Arthur Schlesinger called “mediocre reproductions,” she was so appalled “she resolved on the spot to establish the President’s residence thereafter as unequivocally the nation’s house and transform it into a house of which the nation could be thoroughly proud.”

How did Jackie Kennedy do that?

She succeeded in getting legislation passed — again from Schlesinger’s memoir A Thousand Days: John F. Kennedy in the White House (with my bold for emphasis) — “designating the White House as a museum and enabling it to receive gifts.”

This lovely loophole created by Jacqueline Kennedy herself is called the White House Historical Association. And how is it funded? Here’s the Association itself, again my bold print for emphasis:

In other words, this group, which already operates within the White House itself and was specifically created to do so, is able to legally receive gifts of money from private citizens — like Donald Trump. Like Eric Bolling. Like Sean Hannity.

What was it that Jay Carney said concerning the Secret Service? He said this:

“The Secret Service, like other agencies of government is affected by the sequester…. And the Secret Service presented options that ranged from canceling tours to potential furloughs….”

The magic word Carney said without knowing he said it? That would be: “furloughs.”

The Obama administration’s own Office of Management and Budget explains that the sequester deals with furloughs in this way:

Translation: The sequester qualifies as a “shutdown furlough” or “emergency furlough” because there is no money appropriated. However: “In a shutdown furlough, an affected agency would have to shut down any activities funded by annual appropriations that are not excepted by law.”

The White House Historical Association, as noted by the Association itself, and in accordance with Jackie Kennedy’s goal, gets it money from “private funding and the sale of its educational products.”

Which is to say, the Association itself — run by a board currently chaired by former Reagan aide Fred Ryan and including former presidential aides and the historian Michael Beschloss (it’s website here) — can accept money from private individuals and then use that money to hire employees like… furloughed federal workers. Federal workers like those 37 uniformed Secret Service officers who are paid $50 an hour for 40 hours a week to secure the tour’s route through the East Wing for a total sequestered cost of about $2 million.

Meaning the White House Historical Association could create what it is permitted by law to do — a one-time “special program.” Meaning a Secret Service officer furloughed by the sequestration could be shifted to the payroll of the White House Historical Association for this program — with his salary supplied from earmarked private contributions by Eric Bolling, Sean Hannity, and Donald Trump and whoever else is interested in stepping forward — and never miss a beat.

A little extra effort involved in paper work? Maybe — maybe not. Federal government employees — like anybody else in America — have the right to work in other jobs while on furlough. In this case, these Secret Service uniformed officers are already cleared for White House duty by definition. Instead of being furloughed and, say, driving a taxi or flipping burgers to make ends meet, they could continue on as is — as paid employees of the WHHA.

And if there is more help needed with these tours?

The public may not realize but there is another tour available — if one knows a member of the White House staff.

That’s right. As a former White House staff member myself I can say as fact that when the normal “working day” ends — it used to be around 8 p.m. on weekdays and another time on weekends — White House staff members themselves conduct private tours of the West Wing. The Oval Office, the Cabinet Room, the press room etc. Assuming Obama aides still do these tours — they are longtime standards in both Republican and Democrat administrations for the president’s contributors and political allies not to mention the staffers’ own friends and family — here’s a suggestion to these Obama aides. Many of whom make in the neighborhood of $100,000 a year.

Stop doing after-hours tours for rich Obama contributors. And take some time to pick up the slack and conduct the regular tours for regular Americans in the morning. Then stay late and get the rest of your job done.

What a thought. Taking the people who pay their salary on a White House tour.

Either that — or furlough themselves.