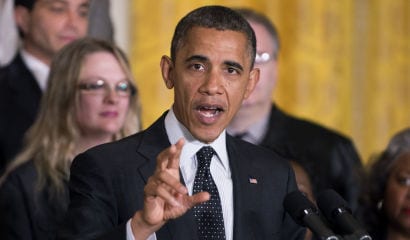 Last week, President Obama told ABC’s George Stephanopoulos that “we don’t have an immediate crisis in terms of debt.” It was par for the course (after all, he is almost always golfing) for the nation’s chief executive who just last year did not know the amount of our nation’s debt and made the preposterously naive statement that “a lot of it we owe to ourselves.”

Apparently, our coming debt crisis is the only one Democrats do want to go to waste.

On Sunday, with the same “moderator” who is perhaps ABC’s most effective Democrat operative, Speaker of the House John Boehner (R-OH) offered a distinction without a difference, saying that “We do not have an immediate debt crisis.… But we all know that we have one looming.” It was an unnecessary gift to the Democrat messaging machine, as liberals predictably highlighted only the first half of Boehner’s statement.

For example, Rachel Maddow’s blog on MSNBC.com chirped happily that “Boehner agrees: there is no debt crisis.” And Colorado’s own radical leftist, David Sirota, writing for Salon, helpfully suggests, “GOP: We’ve been lying all along.” Sirota, not known for intellectual honesty or even an 8th-grade understanding of economics, did not mention Boehner’s “looming” comment; at least Maddow’s contributor did. When you’re even less honest than an MSNBC blogger, that’s quite a dubious accomplishment.

Boehner’s statement seemed to be part of a coordinate Republican plan when House Budget Committee Chairman Paul Ryan (R-WI) said something similar on CBS’s Face the Nation on Sunday: “So we do not have a debt crisis right now. But, we see it coming. We know it’s irrefutably happening. And the point we’re trying to make with our budget is, let’s get ahead of this problem.”

Ryan, like Boehner, is mostly correct but making a political mistake by framing the debt issue with statements that the left will parse to stand on their own as arguments against budget cuts. On the liberal website Politicususa.com, for example, a blogger wrote that “Paul Ryan Trashes His Own Budget By Admitting That There is No Debt Crisis.” (Clearly the writer took a lesson from the Clinton school on the definition of “is.”)

That note had 2,700 Facebook “likes” by Monday morning. Most of those will circulate within a liberal bubble where people already believe the worst of any Republican (such as this doozy). But if such messages reach even a few hundred undecided or moderate or independent voters, it is damaging for Republican electoral and policy prospects, and more importantly for the prospects of nudging the few moderate Senate Democrats (or at least Democrats from purple or red states who are seeking reelection) toward accepting a better rather than worse federal budget.

In addition to lessening political pressure from constituents, it gives those Democrats – who would love to find a way to go along with Harry Reid and President Obama – a talking point: “Hey, even Paul Ryan thinks we don’t have a serious problem today.”

A better answer is: Greece didn’t think they had a crisis – until they did. Same for Spain and Italy. A crisis is generally caused by financial markets no longer having enough faith in the ability of a debtor to pay its bills. That threshold level of lack of faith – a level that can never be known in advance – is breached with little notice and little apparent immediate provocation, causing jarring financial turmoil. If Democrats don’t care about the economic consequences of their lack of economic concern, they should at least care about its likely fatal impact on their careers.

A debt crisis works like a child’s jack-in-the-box: the government keeps turning the crank, never knowing just when the box will pop open. Indeed, especially among Democrats, many seem not to know that it eventually must. And like children, politicians around the world routinely seem surprised when the pop happens.

Even Marxists recognized this, with Georg Hegel writing in 1832 that “peoples and governments never have learned anything from history, or acted on principles deduced from it.” Yet I still suggest, despite the closed-mindedness of our current president, that history is worth a look and that, as Twain reminded us, even if history doesn’t precisely repeat, it rhymes.

The first chart is three years of data of the Greek government’s 10-year bond yield. (Charts from Bloomberg.com) 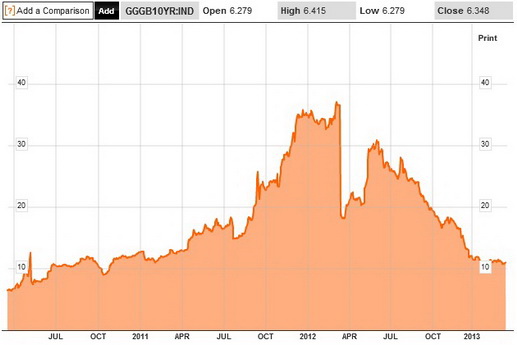 Greece is the most extreme example, with interest rates spiking from 15 percent to 35 percent during their crisis, before drifting down to about 11 percent today. But the calm nature of the recent trading in Greek debt masks tremendous damage done during the crisis and the period when it was only “looming.”

In January 2011, Greek unemployment was an already painfully high 15 percent, having gone up from about 7 percent in late 2008 to 10 percent in January 2010 and drifting slowly up from there. From January to July 2011, it crept up to about 17 percent and then, during their debt crisis, jumped to over 21 percent by January 2012. However, unlike interest rates which settled down and stabilized at modest levels, Greek unemployment – and thus Greek national misery – kept climbing to about 26 percent, where it has remained since the third quarter of 2012.

To be sure, the U.S. is not Greece. Our legislature is slightly less dysfunctional than theirs, our president is only slightly more economically ignorant than their prime minister, and our health care system is only now being turned into the socialist disaster that Greece proved is destined to fail our nation’s old and sick. Most importantly, we have a Fed that can print money and “monetize the debt” which, in a debt crisis situation, might make interest rates appear nominally stable, at least compared to Greece, but at the expense of destroying the value of our currency and creating substantial inflation.

So what about the country that is much less of a basket case, namely Italy, the eighth largest economy in the world?

As you can see in the chart below, Italian interest rates had moved slightly higher over the course of 2010 but stayed below 5 percent until July 2011 when the “looming” problem turned into an “immediate” one. Rates spiked to over 7 percent for much of the fourth quarter of 2011 before drifting back down to under 5 percent today. But like Greece, the true damage was already done despite today’s bailout-backed interest rates masking true human suffering caused by years of government over-spending. 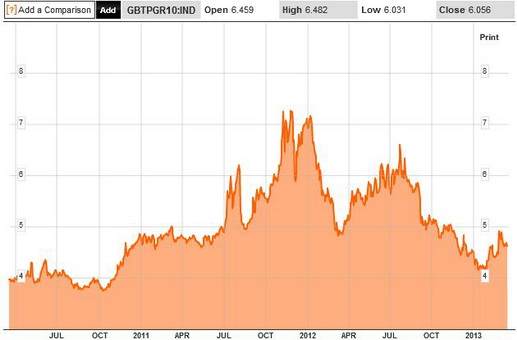 Italian unemployment, which had been fairly steady just above eight percent since late 2009, began a persistent, painful climb at about the same time the interest rate breakout about 5 percent began, and it has never looked back. An economic report released this month noted ominously “Italy Jobless Rate Jumps to Record High of 11.7 Percent in January.”

But these economies are small compared to the United States, and their debts, while high as a share of their GDP also pale in comparison to America’s national debt which is nearing $17 trillion. (Greece’s debt is about $470 billion, and Italy owes about $2.6 trillion.)

As the Wall Street Journal noted last year, the Congressional Budget Office calculated that “every 100 basis-point (one percent) rise in government borrowing costs over the next decade will trigger almost $1 trillion in new federal debt.” If there is an American debt crisis, the move in interest rates will be more than 100 basis points unless the Federal Reserve is willing and able to turn the U.S. Dollar into the Zimbabwean Dollar. (Perhaps Mr. Mugabe has a few containers full of billion dollar notes he could loan us… assuming we don’t quite get to needing hundred trillion dollar notes.)

And if you thought that the various debt problems in Europe shook the United States, imagine the impact on the world when the roles are reversed. This is what will happen when American jack-in-the-box economics turns the crank once too often.

The Treasury Department is wisely looking to extend the average maturity of U.S. debt, now at around 65 months. This remains low among the major economic powers and adds to the risk of increasing interest rates.  Yes, the shorter-term money was cheaper, but it means that about half of the publicly-held federal debt will mature in the next few years. If interest rates go up in that time – which could happen despite Helicopter Ben Bernanke’s best (or, as many rational economists think, worst) efforts – our budget deficits will increase much faster than anyone has expected.

And if that happens, the required “austerity” will make the Ryan budget, which slightly slows the rate of growth of federal spending, look impossibly extravagant. The massive budget cuts that will be required will cause serious short term pain in much the same way that cutting off a dope addict’s supply causes him to shake and sweat. Yes, breaking the habit is a long run benefit, even a necessity, but our national DTs will be ugly and painful.

Governments around the world have used rhetoric like Barack Obama’s to kick the debt can down the road for decades. The can is kicking back with potentially disastrous consequences. Republicans should not abet this president’s dismissiveness of the fiscal sword hanging over our children’s future by making comments that Democrats and the mainstream media (if you will pardon my redundancy) will spin into reasons to remain on our current doomed path.

While Boehner and Ryan are right in an academic sense that our debt crisis is “looming” rather than “immediate,” they should reframe the discussion as not to give aid and comfort to the big-spenders in Washington, D.C. Republicans should aggressively argue that prudence dictates we act as if a crisis is hours, not years, away. We should do now what we would do if interest rates had already begun their inevitable climb, in order to ensure that the climb is gradual and limited rather than sudden and frighteningly large. Playing down the financial peril our nation faces substantially increases the chances that we will do nothing until it is too late.

Barack Obama, ever the economic enfant terrible, is treating the United States national debt like a jack-in-the-box. We don’t know how many turns we have until it pops open. Republicans must make sure the American electorate knows what a dangerous game our president is glibly playing with our nation’s future, and that the difference between a “looming” crisis and an “immediate” one, like the difference between a closed jack-in-the-box and one that pops open, is just a few turns of the bond market.