Because I’ve extensively covered the Tea Party movement — and actually spoken at three Tea Party events — people often ask me what it’s all about. Perhaps the best answer is that a lot of people who once thought they couldn’t do anything about politics have been persuaded that they can. Richard Viguerie writes at American Thinker:

Rasmussen reports that the Tea Party Movement, which percolated only months ago, is beating the Grand Old Party.
That’s amazing — a nascent grassroots movement is more popular than a long-established political party — and it’s good news.
Republican Party leaders should be embarrassed. Instead, the Republican establishment disdains this populist uprising. . . .
What’s driving the Tea Party phenomenon? Robert Stacy McCain writes at American Spectator about one tea partier, Rhonda Lee Welsch, who says, “‘It’s a systemic problem,’ discussing the top-down approach of leaders in both parties who seem indifferent to the concerns of ordinary Americans.” . . . (Emphasis added.)

Why does political leadership so easily succumb to this indifference? In part because leaders become isolated in centers of power, surrounded by sycophants who seek to advance their personal ambitions through flattery (“You’re doing a great job, boss!”) while constantly besieged by wealthy interests seeking to influence policy.

During the Bush years, and especially in the immediate aftermath of the 2004 election, when it seemed that Karl Rove’s “permanent Republican majority” had become a reality, those much ballyhooed “values volters” went home and told themselves they’d done their job. The Republicans they’d elected told themselves that they could do anything they wanted — including amnesty for illegal aliens — and still win re-election.

The Republican leaders would lead, and the Republican followers would follow — or so the leaders imagined, until the back-to-back electoral disasters of 2006 and 2008. Those disasters caught the GOP elite by surprise and, as usual, they tried to blame their blunders on scapegoats, including Sarah Palin (“Stickin’ With the Hockey Mom,” American Spectator, Oct. 31, 2008) and the conservative grassroots who are the heart and soul of the Republican Party (“You Did Not Lose,” American Spectator, Nov. 5, 2008).

A few weeks ago, I had a long conversation with a liberal journalist who asked me, “Who do you see as the leader of the conservative movement?” I didn’t have an answer, but Richard Viguerie is onto something when he emphasizes the “leaderless” quality of the Tea Party grassroots, quoting a historical study of the Apaches: “You wanted to follow Geronimo? You followed Geronimo. You didn’t want to follow him? Then you didn’t. The power lay with each individual.” Viguerie comments:

From the tea parties, the grassroots, and the alternative media, we are seeing new leaders emerge. Like our Founders, they understand that their strength of leadership does not come from a political party, but from consent of the governed. That is why they don’t hitch their wagons to one person or one party.
Talk radio host Mark “The Great One” Levin discussed recently how Reagan spoke not of “his” administration, but of “this” administration. Levin noted how Reagan understood his power came from the people, not from the office he held.

Elitists who disparage the Tea Party movement have argued that such chaotic populism is un-Reaganesque, portraying the Gipper’s triumph as primarily the work of intellectuals and policy specialists. Perhaps you should ask Viguerie and Levin about that. Better yet, ask Craig Shirley, whose new book Rendezvous With Destiny chronicles in fascinating detail the 1980 campaign that elected Reagan.

You don’t hear Craig Shirley dissing the Tea Party people, do you? No, nor will you. Elitists who think that only pundits, policy “experts” and think-tank wonks should have a say in the political process are, in fact, the antithesis of what the Reagan Revolution was about. 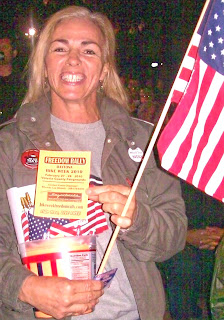 Rhonda Lee Welsch has a vision: Thousands of bikers on Harleys, rallying for freedom in Daytona Beach in February, and then roaring into Washington later next year. If you think a rowdy bunch of Harley riders can’t make a difference . . . Well, can’t never could.