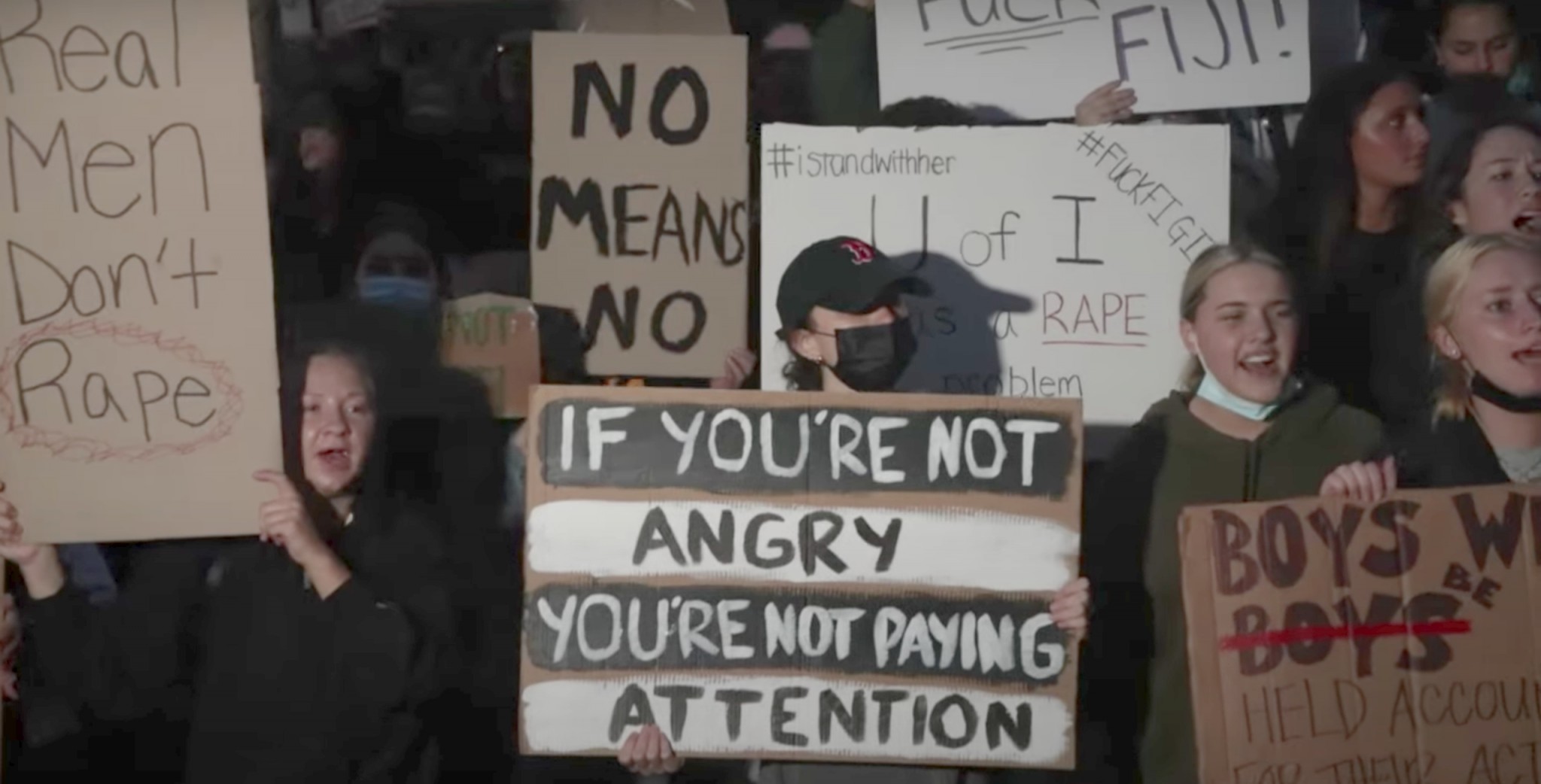 In the first few weeks of the 2021 semester, without the major media noticing, startling similar protests involving thousands of students have erupted on at least three major state university campuses — the Universities of Nebraska, Iowa, and Kansas. In each case, an alleged sexual assault by a fraternity member has triggered these “largely peaceful protests,” but in no case has the accused been arrested.

Although To Kill a Mockingbird remains among the most read books by college students, the protestors seem to have taken as role model not Atticus, but the racist vigilantes swarming the courthouse. Mao’s Red Guard would envy the students’ collective indifference to due process. A friend who stumbled onto the initial Kansas University protest told me, “It was madness, utter mob justice, a la Mississippi lynch mob, circa 1935.”

The protestors are largely white, female, and naive. Most, I suspect, think theirs is a legitimate protest against a real problem. To be sure, sexual assault is evil and inexcusable.

But then so too is its exploitation. Christina Hoff Sommers has described these anti-male protests as one of “those panics where paranoia, censorship, and false accusations flourish — and otherwise sensible people abandon their critical facilities.”

The people who gin up these panics have a larger motive, that is to eliminate the last redoubts of conservatism on college campuses, the fraternities. They will not be satisfied until the guys leading the “F*** Joe Biden” chants at college stadiums across the country are frog-marched off campus.

The cause of the panic can change from year to year. In the first semester of 2020, the casus belli was race. Allegedly horrified by a “handful of racial incidents,” activists launched a nationwide ‘Abolish Greek Life’ movement. In a friendly New York Times article, they branded the frats as “exclusionary, racist and misogynist,” but in 2020, what institution wasn’t? No, what made the frats more dangerous was that they were uniquely “resistant to reform.”

In 2021, it has been all about sex. The first salvos in this new front were launched at the University of Nebraska’s flagship campus in Lincoln. Some members of the Phi Gamma Delta fraternity, affectionately known as “Fiji,” held an off-campus party on Monday, August 23. In the early morning hours after the party, a 17-year-old female student alleged she had been sexually assaulted by a 19-year-old Fiji. This triggered four consecutive nights of riotous protest and lesser acts of defiance in the weeks since.

The protest at the University of Iowa was pure copycat, embarrassingly so. Lacking a recent incident to arouse the masses, activists dug into their Fiji files. Lo and behold, they found allegations from an incident a year prior and promptly launched a petition on Change.org to shut down Fiji. The Daily Iowan, the student newspaper, reported: “The petition comes days after allegations were made against the University of Nebraska-Lincoln’s FIJI chapter, which was suspended Aug. 25 while the university investigates an alleged sexual assault.”

Not wanting the revolution to pass them by, Iowa activists staged an attack on their own Fiji house. On August 31, some 2,000 protestors stormed the fraternity. According to the Daily Iowan, they were “breaking windows and spray painting the house.” The following night, a smaller mob descended on the University of Iowa’s president’s home, chanting, “You’re all guilty,” and, “You’re all complicit.”

On September 13, activists took the battle to the Phi Kappa Psi house at the University of Kansas in Lawrence. After rumors of a September 11 sexual assault spread through social media, thousands gathered to storm the frat house. Fox 4 News in Kansas City initially — and accurately — headlined its story, “’No Means No’ Rally at KU fraternity turns violent.”

“If there was a true respect for due process and justice at KU,” my source at the scene told me, “the university president would have showed up with a megaphone to disperse this crowd. To state the obvious: that didn’t happen.”

Of course, it didn’t. The following day, Kansas University Chancellor Douglas Girod sent an email to the students congratulating them for having “moved to gather in support of combatting sexual assault.” Girod then droned on piously about all the many “resources” and “robust processes” the university put in place to protect victims. For this taxpayer-funded forward thinking, the chancellor boasted, Kansas University had been “lauded nationally.”

True to form, Girod spared not a word for the rights of the accused or the perils of guilt by association. If the students were not old enough to remember the 2006 Duke lacrosse case or the sexual hysteria generated at the University of Virginia by a gullible Rolling Stone reporter in 2014, Girod certainly was.

Appeasement, of course, never works. In the cult of the woke, there is neither mercy nor redemption. A few days after Girod’s unseemly boasting, 100 or so students staged a sit-in outside of his office. “As a woman, it is still very concerning how this is still happening on our campus and nothing has been done to put a stop to it,” a freshman told the Kansas University’s Daily Kansan. She was apparently oblivious to Kansas University’s nationally lauded robust programs and processes. When asked about Girod’s email, she added, “It is really a blanket statement but they are not addressing the actual issue or putting a stop to it.”

At the University of Nebraska, the underlying motives of the activists showed through clearly — and early. On January 21, 2017, the day after President Donald Trump’s inauguration, a Women’s March from the campus student union to the Nebraska State Capitol wound right past the Fiji House. Apparently, the boys let their Trump flags fly, literally, and traded barbs with some of the women. “The marchers went nuts,” my University of Nebraska Fiji source told me. “The university lost its sh**.”

Not keen on dissident speech, University of Nebraska-Lincoln honchos temporarily suspended the frat and promptly launched an investigation.

Once the investigation was complete, Vice Chancellor for Student Affairs Juan N. Franco announced a three-year suspension. “While not the focal point of the suspension,” Franco dissembled, “comments made by Fiji members Jan. 21 outside the fraternity house during a women’s march were consistent with the pattern of sexually harassing conduct evident in multiple other incidents.”

To the surprise of the University of Nebraska brass, Fiji proved “resistant to reform.” Arguing that their First Amendment rights had been invalidated by the student code of conduct, they eventually took their case over the heads of the administration to the University of Nebraska Board of Regents. The regents hired a Kansas City law firm to investigate the investigation. Although Fiji was not allowed to see the firm’s report — it was reportedly too damning to be made public — the suspension was curtailed, and administrative heads rolled.

“Civil, respectful discourse and actions are a core tenet of our institution and we are always working to ensure that tenet is a reality,” said a university flak catcher in 2017 while scolding Fiji. In 2021, those core tenets went out the window. University of Nebraska-Lincoln Chancellor Ronnie Green responded by demanding the house be closed and its operations suspended. In a predictably smarmy statement. Green went on to boast of all the various new levels of administrative oversight and “mandatory” training imposed on staff and taxpayers alike.

A month after the incident, charges have yet to be filed against the 19-year-old accused of sexual assault at the University of Nebraska. At the time the protests began at the University of Nebraska-Lincoln, protesters knew no details. They still don’t even know whether the accusation was legitimate. Ignorance has not diminished the mania. Activists have posted the following on Change.org:

Fiji or Phi Gamma Delta needs to pay for there (sic) actions. 13 girls have been raped so far as to be left on the lawn naked and bleeding. If you think that these people and this institution should face consequences sign this let’s get them removed.

This accusation is pure madness. Yet as of this writing nearly 500,000 people have signed the “BAN FIJI FOREVER” petition. Chancellor Green should have asked for caution. He should at least have checked the petition for spelling. He has done neither.

Technically, Green does not have the authority to close the Fiji chapter. The Board of Archons, which is the governing body of the national organization, has that power. On October 5, there will be a hearing in front of that board to determine the fate of the Fiji chapter at the University of Nebraska. That hearing will center around the fact that the frat guys held a party off campus and, in doing so, violated the fraternity’s risk management policy.

The hearing has nothing to do with sexual assault, not because the board members are indifferent, but because they do not believe in collective punishment for individual acts that have yet to be adjudicated. If “resistant to reform” means believing in due process, the men of Fiji plead guilty.