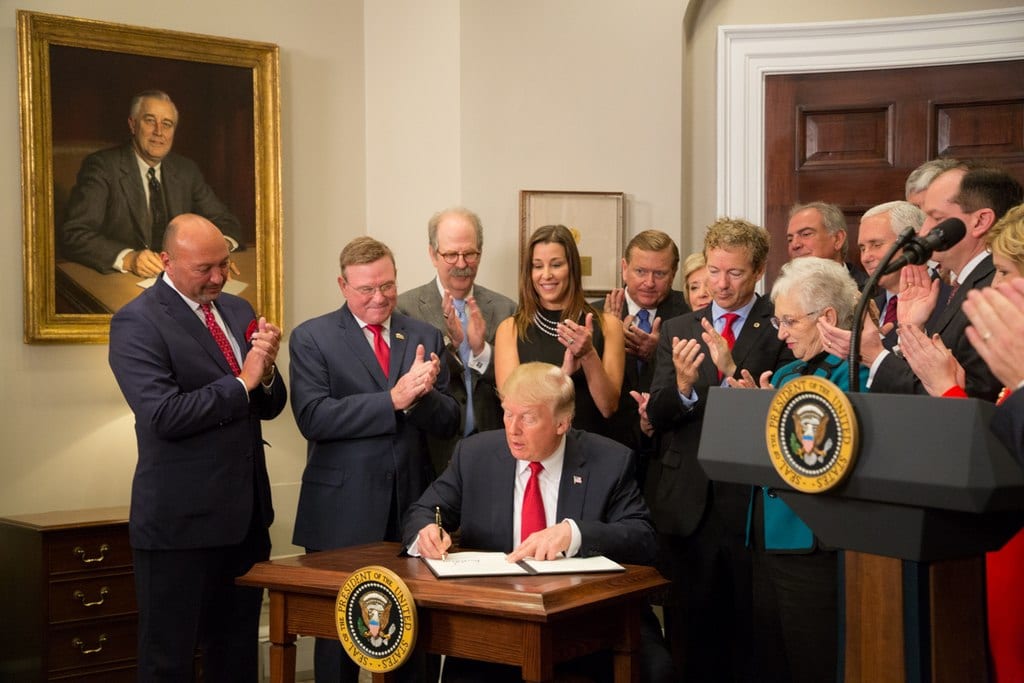 Despite attempts by their leadership to tamp down pre-midterm impeachment talk, the Democrats are clearly anxious to remove President Trump from office if the voters are crazy enough to grant them a majority in the House this fall. The only question involves the pretext Pelosi, et al., will use to justify the coup. Their last impeachment resolution, introduced by Texas Rep. Al Green, didn’t list any actual crimes or misdemeanors and it’s unlikely that the Mueller investigation will produce enough evidence of wrongdoing to impeach a ham sandwich. So, what’s a Trump-deranged Democrat to do? Nail him for Obamacare sabotage, of course.

This idea was introduced more than a year ago by Noah Feldman, a Harvard law professor, and echoed by Clinton minion Robert Reich last October. It has gained increasing traction among TDS victims as various conspiracy theories involving the Russians have produced nothing but terminations and resignations at the FBI. The notion that Trump is violating the Constitution for failing to toe the progressive line on Obamacare reached a crescendo on Tuesday in the New York Times, where law professors Nicholas Bagley and Abbe Gluck assure the Gray Lady’s hopeful readers, “Mr. Trump’s assault on Obamacare is illegal.”

Bagley and Gluck, who teach at the University of Michigan and Yale respectively, contend that the Constitution’s “Take Care Clause” leaves the President no room for discretion in the enforcement of the health care law and that there is no modern precedent for his exercise of such discretion. They aver that “Mr. Trump isn’t a king.” Oddly, neither seems to have pointed out that the same restrictions applied to “Mr. Obama” when he unilaterally suspended enforcement of various federal statutes, including the sacrosanct Patient Protection and Affordable Care Act (PPACA). As Professor Zachary Price of UC Hastings reminds us:

Under President Obama, the executive branch announced policies of abstaining from investigating and prosecuting certain federal marijuana offenses in states where possession of the drug is legal and delaying for substantial periods the enforcement of key provisions of the Affordable Care Act (ACA). Earlier, the Administration adopted a controversial policy of declining to seek removal of certain sympathetic undocumented immigrants who entered the United States as young children.

For the Obama administration, in other words, enforcement discretion was practically a mission statement. Nonetheless, neither Bagley nor Gluck denounced “Mr. Obama” as a presidential scofflaw. It would appear, then, that these characters are less concerned with the President’s desire to “take care that the laws be faithfully executed” than with the political party to which he belongs. And, even if they weren’t encumbered by transparent political bias, they aren’t up to speed on the provisions of Obamacare. They claim, for example, that the Trump administration’s recently finalized rule on short-term health plans violates the law:

In a new rule, it announced that insurers will have more latitude to sell “short-term” health plans that are exempt from the Affordable Care Act’s rules. These plans were designed to provide people insurance for small gaps in coverage, like those created when switching jobs. They had previously been limited to three months. Under Mr. Trump’s new rule, however, such plans can last for 364 days and can be renewed for up to three years.… This sort of splintering of the insurance markets is not allowed under the Affordable Care Act as Congress drafted it.

This claim illustrates the ignorance with which Bagley and Gluck approach health care policy. They obviously believe that the duration of these health plans has always been limited to 90 days and that they are explicitly restricted by Obamacare. This is nonsense. Short term health insurance has long been defined, by the states and the federal government, as a policy whose duration is 364 days or less. This was not changed by PPACA. They were arbitrarily (and illegally) restricted to 90 days in 2016 by the Obama administration to stop consumers from using them to avoid purchasing overpriced plans through Obamacare’s exchanges.

Bagley and Gluck can perhaps be excused for not understanding PPACA. Everyone neglects their homework once in a while. It’s harder to forgive their odd notion that a vague clause in Article II of the Constitution precludes a (Republican) President from using discretion as he enforces the nation’s laws. They see the Take Care Clause as a kind of constitutional straightjacket into which President Trump must be immured. But neither the Constitution, the Supreme Court, nor many scholars support this weirdly rigid view. As Jack Goldsmith and John F. Manning, of Harvard Law, explain in “The Protean Take Care Clause”:

Phrased in a passive voice, the clause seems to impose upon the President some sort of duty to exercise unspecified means to get those who execute the law, whoever they may be, to act with some sort of fidelity that the clause does not define. Through a long and varied course of interpretation, however, the Court has read that vague but modest language, in the alternative, either as a source of vast presidential power or as a sharp limitation on the powers of both the President and the other branches of government.

Goldsmith and Manning, the latter being the Dean of Harvard Law, go on to cite a SCOTUS ruling that conflicts with Bagley and Gluck’s claim that “Mr. Trump’s attempt to destroy the law any way he can is an unconstitutional usurpation of power.” In at least one high-profile case, they write, “[T]he Court has read the Take Care Clause as the source of inherent presidential authority to take acts necessary to protect the operations of the federal government, even in cases in which no statute provides explicit authority to do so.” It will be pretty difficult to make an honest legal argument that the President has cleared that lofty bar.

But Bagley and Gluck aren’t trying to make a legal case, their claims to the contrary notwithstanding. They are, instead, colluding with the New York Times to get rid of President Trump by providing a pseudo-constitutional veneer for impeachment. They don’t admit that, of course. They claim in their last paragraph to be motivated by a sincere concern about Trump’s allegedly illegal attacks on the handiwork of Congress and sanctimoniously declare: “No matter how you feel about Obamacare, we should all care about that.” What BS! These two are obviously writing a script for the Democrats. Remember that on November 6, 2018.