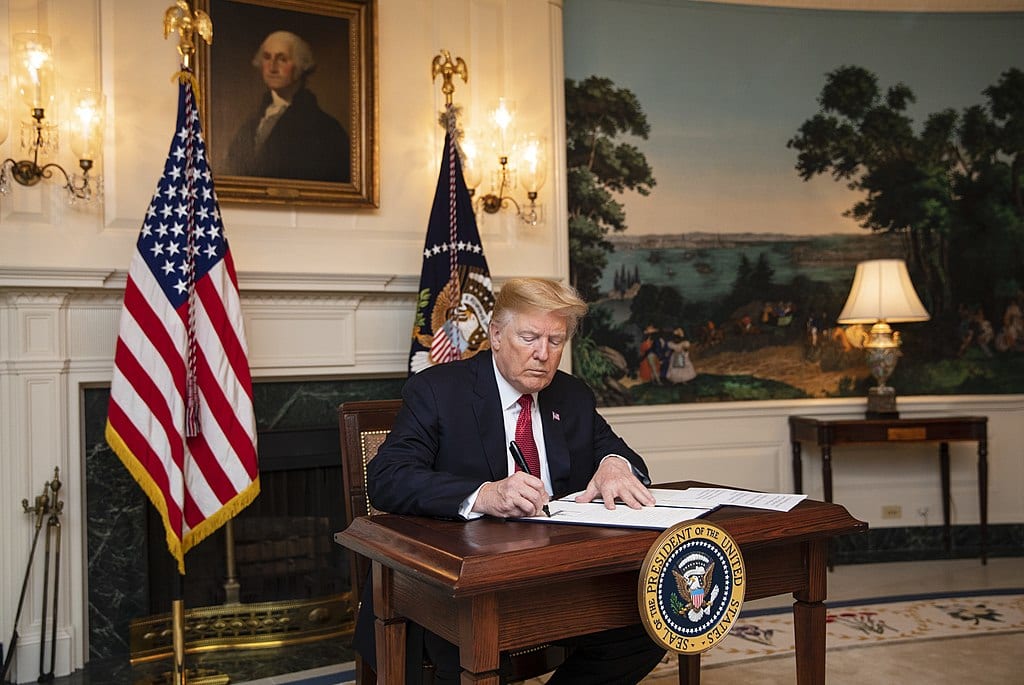 The Democrats squealed with delight when the President decided to temporarily end the partial government shutdown. Nancy Pelosi, Chuck Schumer, and their media supporters believe they have won a famous victory. Indeed, more than a few have declared the Trump presidency dead. This isn’t merely delusional, it means that two years of dealing with “the Donald” have taught them nothing about how he operates. The President is adapting to the post-midterm political environment by changing his “game face.” The Democrats continue to indulge their irrational antipathy toward Trump and embrace increasingly inane policy positions. Meanwhile, he is becoming more presidential.

Thus, when he was told last week that Nancy Pelosi had withdrawn the SOTU invitation, he reacted more in sorrow than in anger: “I’m not surprised. It’s really a shame what’s happening with the Democrats. They’ve become radicalized.” Then, after getting Madam Speaker’s attention by halting her taxpayer-funded vacation, he responded in a measured fashion: “She changed her mind because of the shutdown, suggesting a later date. This is her prerogative. I will do the address when the shutdown is over.” Now that she has once again invited him to speak to Congress, and what may well be a record national audience, he will use the SOTU address to close the deal on the Wall.

Not that the voters require much persuading. Monday evening, a poll commissioned by the RNC was released showing that a majority of voters in 10 key congressional districts held by Democrats believe that the President’s shutdown compromise should have been accepted by Pelosi and Schumer. The Washington Examiner reports that a 61%-35% majority support the president’s position on border security. They also support building a wall between the U.S. and Mexico by a 53%-43% margin. And even more deadly for his opponents, Trump’s statesmanship is working. By a 41%-34% margin, voters said he was “more open to compromise on this issue” than congressional Democrats.

This is consistent with numerous polls that have found substantial majorities of voters favoring compromise on border security, and it is why the shutdown dramatically increased Nancy Pelosi’s negatives without seriously affecting Trump’s. A large plurality of Americans believe we have a genuine crisis on our hands at the U.S.-Mexico border, and they are unlikely to view continued Democratic intransigence favorably as three new caravans from Central America head our way. Yet the new Democratic majority in the House seems determined to ignore the clear and present danger posed by wave after wave of illegal immigrants entering the country. The Washington Times reports:

New House Armed Services Committee Chairman Adam Smith questioned why the mission was expanded from guard to active-duty troops.… Defense Undersecretary for Policy John Rood told Congress that those caravans are one reason why the presence of active-duty troops is still needed on the U.S.-Mexico border.… Vice Admiral Michael Gilday, director of operations at the Joint Chiefs of Staff, said they just didn’t have enough capacity within the National Guard.

This kind of detection and monitoring is, of course, needed because large sections of the nation’s southern border contain no barriers. And this point is something that President Trump is likely to reiterate in the SOTU. If the Democrats don’t want troops on that border, the obvious and less expensive alternative would be some sort of concrete or steel barrier. Yet despite their well-documented support for such physical obstacles before Trump took office, Nancy Pelosi and Chuck Schumer have had a joint epiphany — walls are “immoral.” So, it is by no means a given that they will appropriate the $5.7 billion that the President has asked for in order to continue construction on the Wall.

What if they don’t? Trump can declare the situation at the border a national emergency. And, the fallacious claims of the Democrats and some partisan legal scholars notwithstanding, he certainly has the power to do so. Indeed, even the new Armed Services Committee Chairman noted above, Democratic Rep. Adam Smith (WA), admits that the President has the power to declare the border crisis a national emergency and order the military to build the wall. When asked that crucial question by George Stephanopoulos on ABC’s This Week, Smith answered, “Unfortunately, the short answer is yes.” Jonathan Turley of George Washington University agrees. He explains it thus:

The 1976 National Emergencies Act gives presidents sweeping authority as well as allowance in federal regulations to declare an “immigration emergency” to deal with an “influx of aliens which either is of such magnitude or exhibits such other characteristics that effective administration of the immigration laws of the United States is beyond the existing capabilities” of immigration authorities “in the affected area or areas.”

Nor is this opinion confined to centrists like Turley. NPR quotes Elizabeth Goitein of the Brennan Center for Justice as follows: “Congress chose not to put any substantial — or really any — barriers on the president’s ability to declare a national emergency.” There are no fewer than 30 national emergency measures currently in effect and, according to Goitein, “Congress has never voted once in the last 40 years — since the National Emergencies Act has been in effect — to terminate a state of emergency.” This is not to say that Goitein or Turley have much affinity for this option. Ironically, neither does the President. He has said he’d rather work out a deal with Congress.

Trump has, however, suggested that he may well go the emergency route if Pelosi and Schumer remain intransigent: “We can call a national emergency. I haven’t done it. I may do it.… It’s another way of doing it.” The standard line trotted out by the Democrats and the media when the President alludes to an emergency declaration is that a phalanx of pettifoggers will contrive to tie it up in the courts indefinitely. This has even been repeated by conservative pundits. According to Professor Turley, however, “Courts generally have deferred to the judgments of presidents on the basis for such national emergencies, and dozens of such declarations have been made without serious judicial review.”

All of which means that there is no practical way for the Democrats to stop Trump from getting his wall. He will make a sound, statesmanlike case for it to the nation during the State of the Union address — just 10 days before the deadline to avoid another shutdown. Nancy Pelosi will be scowling behind him, still smarting from the beating she received in the polls from the last shutdown and the hectoring to which she has no doubt been subjected from vulnerable members whose constituents are tired of, “NO.” Then, failed Georgia gubernatorial candidate Stacey Abrams will deliver the Dem SOTU response and characterize Trump’s wall using the usual tired clichés about racism.

In other words, Trump will have been presidential. He will have delivered all manner of good news about the economy, deregulation, health care, foreign policy, and will have laid out a plan for the wall. The Democrats will have offered identity politics, obstruction, investigations, and magical thinking on policy. Pelosi will at length decide it’s smarter to ignore the crazies in her caucus, give Trump something that he can call a “win” on the wall, and move on to something else… anything else. And all the TDS victims and Never Trumpers will demand to know what happened to their bête noire.