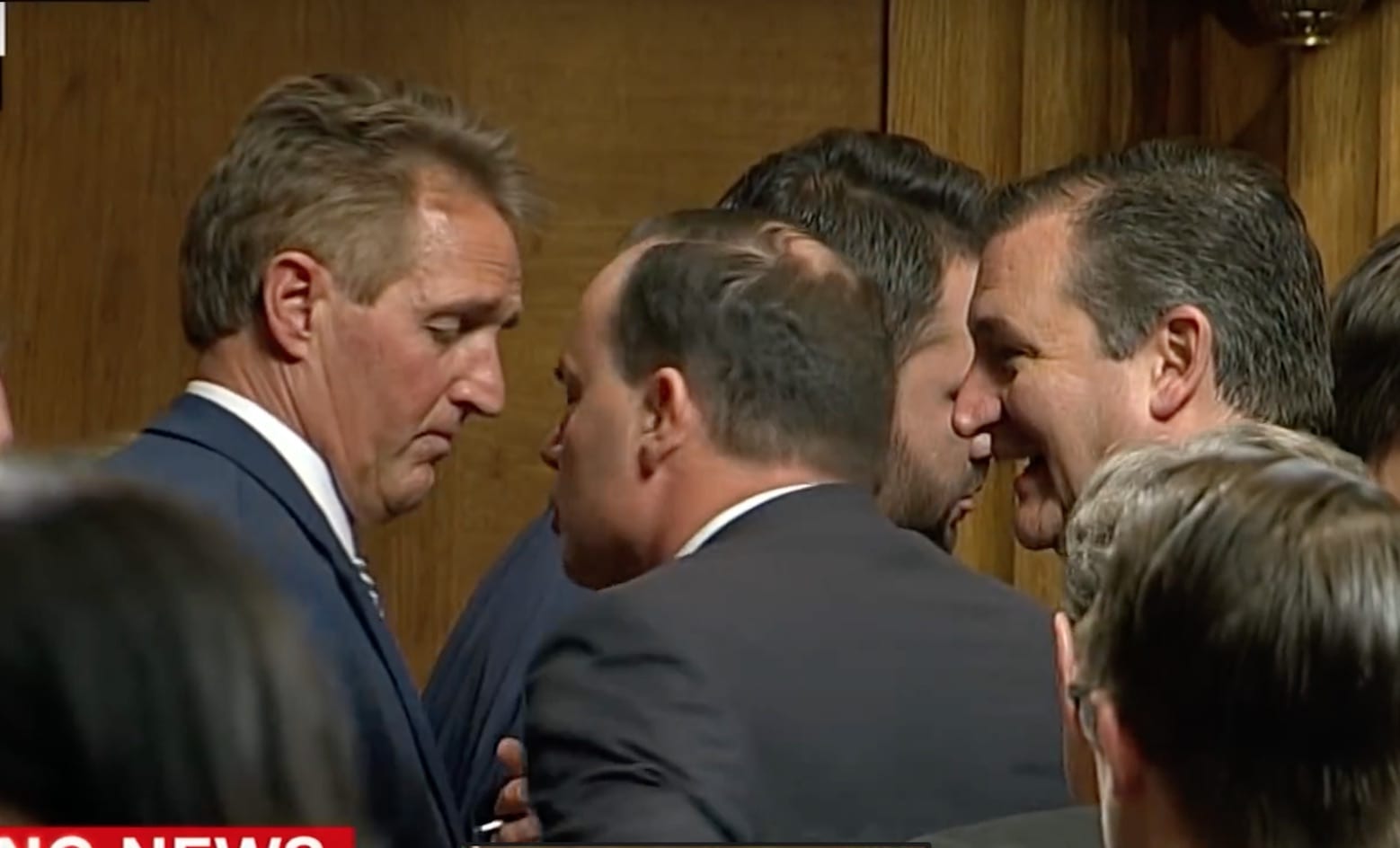 It is beyond frustrating that yet another week of delay in the Kavanaugh Saga now is on the horizon, as the Senate Judiciary Committee has authorized a quick, efficient supplemental FBI investigation limited in time and scope. President Trump, whom The Resistance portrays regularly as an irrational authoritarian who is bull-headed and listens to no one, swiftly agreed to the compromise proposal :“I’ve ordered the FBI to conduct a supplemental investigation to update Judge Kavanaugh’s file,” Trump said in a statement. “As the Senate has requested, this update must be limited in scope and completed in less than one week.”

Although few things may seem more frustrating to Judge Kavanaugh’s supporters than to wait yet another week for an anti-climactic seventh FBI investigation into his background, the extension of time does offer several potential benefits for both the judge as he prepares to ascend the nation’s highest bench and for the Republicans as they go into the November elections.

First, hidden behind the Democrats’ cynical charade of seeking “only the truth” is a huge tug of war between the parties over the suburban white female voter. The brilliance of having Rachel Mitchell, an experienced sex-crimes prosecutor, conduct the questioning of Christine Blasey Ford becomes more apparent in that light. The Democrats wanted the nation’s women to emerge appalled by the harsh mistreatment they hoped would unfold brutally as Republican Senators on the Judiciary Committee presumably would tear into her story’s inconsistencies and uncertainties. Yes, the Charles Grassleys and Orrin Hatches would win litigation points, but they would lose undecided voters, particularly reasonable open-minded women. The GOP masterfully avoided that trap as Ms. Mitchell uncovered enough inconsistencies, curiosities, and uncertainties in Dr. Ford’s testimony to justify non-Resisters moving ahead with the Kavanaugh selection and voting Republican in November.

As Democrats on the committee saw their early morning gains dissipate after Judge Kavanaugh powerfully and persuasively defended himself, his name, and his family, they gathered around one last tactic: the demand for an FBI investigation to “clear Kavanaugh’s name.” Oh, how they joined in concern to defend the good name of the man whom they had besmirched for months! “Wouldn’t you want that?” they asked Judge Kavanaugh over and over again. “Why would you not want your name cleared by a non-partisan FBI investigation?” Among the five nominees for best actor in the coveted “Don’t You Want Your Name to Be Cleared by the FBI for a Seventh Time? Category,” Dick Durbin was most compelling, a wonderfully acted performance.

Certainly, half the country sees through the charade, the nonsense — the outright mendacity. Democrats and their Resistance do not care a whit about the claims of Karen Monahan, who persuasively, continually, emphatically asks to be heard as she alleges that Keith Ellison beat her up, dragged her around the floor by her hair, left her in physical shambles. Sen. Kirsten Gillibrand associated tightly and prominently for years with Bill Clinton, well into the years of Paula Corbin Jones, Kathleen Willey, Juanita Broaddrick, Monica Lewinsky. That never bothered her. What about Paula’s truth? Kathleen’s truth? Juanita’s rape? Monica’s victim-shaming?

So half the country sees through it all.

But half the country apparently does not, and their votes count, too. The Republicans lose little but can gain a great deal by demonstrating to middle-road and fair-minded women voters that the gang-attack anti-Kavanaugh depictions on CNN, MSNBC, and in other media are false. That Republicans are fair and reasonable. And that the GOP can go along with one more essentially pointless FBI investigation and background check. The Democrats cannot admit that what they really want is not an “FBI investigation” but really a song-without-an-end Robert Mueller investigation for the next two years — or three years, or four years — of a party whose location is not identified, whose date is unknown, whose reason is mysterious. A party that Christine Ford cannot explain. She cannot explain how she got there, how she got home from there. That is what the Democrats really want — even if it leads to nothing more than plea bargains in four years with Paul Manafort for his breaking and entering into the party to retrieve his ostrich-leather jacket. But the Democrats will not get that. Rather, they will get a week and their FBI investigation.

The ABA will be satisfied. Jeff Flake will be satisfied. Alan Dershowitz will be satisfied. Brett Kavanaugh will have had his seventh FBI clearance. Susan Collins will be covered. Joe Manchin will be covered. And that will be that — because, with all procedural requirements now concluded, if there is one thing on which you can bet the family farm it is that the Republicans are going to get that vote on that Senate floor finally cast before November 6. So thank you, Harry Reid, for ending the filibuster on federal judicial nominees.

Along the way, the Republicans have tip-toed past the pitfalls that loomed before the Ford inquiry. They elicited some key inconsistencies in her accounts without leaving her sobbing and weeping or them seeming to be ogres. Not a single sob sound-bite or screenshot emerged from hours of five-minute intervals. At the same time, they afforded Judge Kavanaugh a proper forum before a riveted nation to clear his name for those open to hearing his narrative without pre-judging the judge. Many in the Republican base now are energized as they were not before. He is a good man. He did nothing of the sort alleged. His children came out of it praying for the woman who has made the unproven, undocumented charges that are so bare of substantiation that even Sen. Jeff Flake moved over to approve sending the Kavanaugh nomination to the Senate floor. That means that Brett Kavanaugh got the majority approval of the same committee that would not give such a majority nod to Clarence Thomas. But the latter now is Justice Thomas— as Brett Kavanaugh will be soon enough. And he yet will be even greater if he considers cutting back a bit on the beer because, as America saw when Robert Dole started doing Viagra commercials, certain things are perfectly fine but do not lend dignity.

The one-week delay further will give the American Bar Association comfort to continue endorsing Brett Kavanaugh’s credentials for the Supreme Court. It will give political cover for Sen. Susan Collins of Maine. In fairness, not all Republican senators come from deep red states, and the Republicans needCollins in the Senate for tax-cut bills and to ratify other judicial appointments, too. If a one-week delay, a meaningless FBI investigation that will uncover nothing and that means nothing, will help secure the continued backing of the ABA, so be it. Along the way, the quick mini-FBI supplemental investigation — presumably interviewing Mark Judge as he deals with his alcoholism and severe health issue, perhaps interviewing the other one or two people who repeatedly have denied knowing anything about a party that is so central to Dr. Ford’s truth — further will take thewind out of the Democrats’ only remaining demand that has even a sound of reasonableness.

In the end, what is the FBI going to find? Unlessthey re-hire Andrew McCabe and assign Peter Strzok to conduct the interviews, what are they going to find? Indeed, hearkening back to their last high-profile investigation — something about some email server in a bathroom — they will be careful and circumspect, knowing that they are being watched. They will find that they cannot locate the house of the party. They cannot determine the date. The alleged witnesses do not remember a thing about it because it never happened as alleged. The FBI will find that Dr. Ford indeed may have experienced an attempted rape at some previous time nearly forty years ago, and some man indeed may have tried to tear off her swim outfit and may have placed a hand on her mouth and may almost accidentally have killed her. But the FBI will come back in a week with little more — and nothing connected to Brett Kavanaugh.

The hapless Democrats — gritting their teeth when the TV camera lights are turned off — will have gotten their FBI investigation. Suburban women will have seen that the Republicans, even the GOP men, are fair. Jeff Flake and Susan Collins will have gotten the cover they need or want to vote on the Senate floor for Judge Kavanaugh. Lisa Murkowski will fall into line. Reading the tea leaves, Joe Manchin probably will vote for Kavanaugh, too — making it at least 52-48. Maybe also Heidi Heitkamp of North Dakota; maybe not. That all will breathe real life into Republican efforts to win precious Red State Senate seats from Resisters Jon Tester in Montana, Claire McCaskill, in Missouri, and Joe Donnelly in Indiana. Or maybe another one or two of those Resisters will capitulate, thus lending even greater legitimacy to Justice Kavanaugh’s elevation and making the Republicans appear even more reasonable.

Most importantly, procedurally the Kavanaugh nomination now is voted out of committee by majority recommendation. The deed is done. All that is left is for the Senate floor vote to finalize the inevitable: approval of the conservative justice who will nudge the balance of the United States Supreme Court towards the conservative judicial philosophy that the voters have been choosing but continually have been thwarted in realizing through four decades of Haynesworth, Carswell, Bork, Brennan, Blackmun, Souter, and similar debacles.