by Paul Kengor
A proof of vaccination sign at a Chelsea business in New York City (rblfmr/Shutterstock.com) 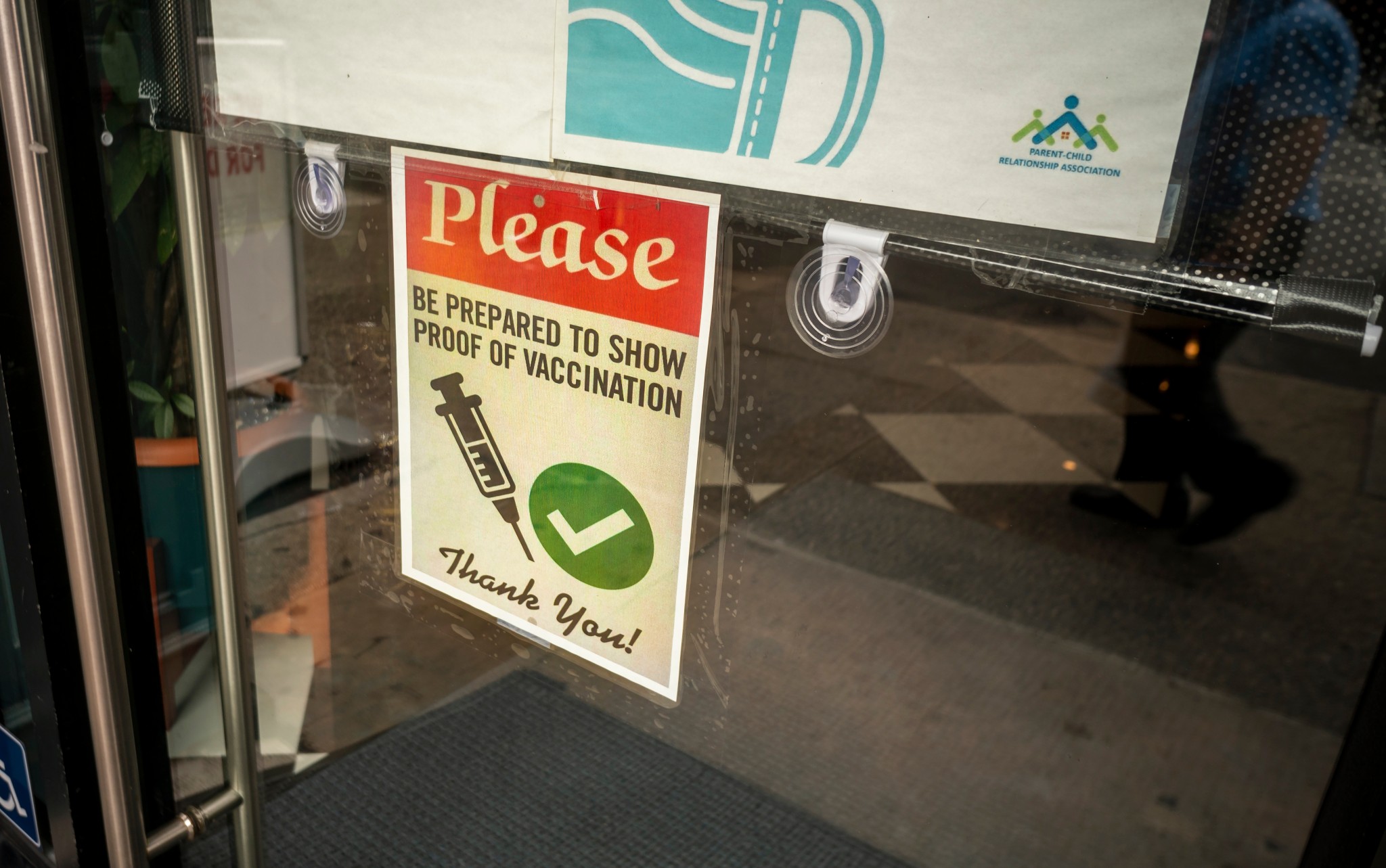 As the Supreme Court considers the unconstitutional overreach of the Biden OSHA mandate forcibly vaccinating Americans, it might also consider the common-sense alternatives. These are obvious options pursued by countries and organizations that follow science and haven’t lost their minds in a mass bout of vax psychosis, as we have here in America, especially our liberals.

Indulge me first with an anecdote illustrating the absurdity of our situation:

I wrote here recently about my latest long, strange trip to COVID-crazed New York City, where approaching a restaurant is a surreal experience. I strolled up to the unfortunate hostess to attempt a dinner reservation. The inevitable inquisition began: “We’re happy to accommodate all of you, sir. Are you vaccinated?”

I answered: “Better than that. We all had COVID. We have immunity. Would you like to see proof of antibodies or our latest negative COVID tests?”

The answer was expected: “I’m sorry but you must be vaccinated.”

I protested: “But why, we have immunity?”

The added irony of that exchange was that one member of our party canceled because she had just tested positive for COVID — and she was the only vaccinated one among us. Her situation is no surprise. It’s why the CDC and Anthony Fauci urge not only second shots but boosters heaped upon indefinite boosters. Why? Because after six months the efficacy of the vaccines collapses.

As I noted in a column in November, one study showed that Pfizer’s effectiveness drops to 39% after six months, and another reported a plummet to 22%. Back in August, a study by Mayo Clinic showed Pfizer’s efficacy already down to 42% and Moderna’s down to 76%. More recently, a research team in Oakland, California found all three major vaccines under 50%. Among them, the Johnson & Johnson vaccine is reportedly almost ineffective after six months, with an efficacy of merely 13%. The Oakland-based team assessed that the three vaccines’ effectiveness had fallen from 88% in March to 48% in September.

That was three months ago, before the explosion of the Omicron variant. Now, heading into 2022, efficacy continues to dwindle, which is why Fauci is now lunging for a three-shot “standard regimen,” perhaps four.

This is why vaccinated people are getting COVID. By contrast, COVID survivors do not have immunity that low. Which brings me back to the scene outside that New York restaurant.

They let us sit outside (fortunately it was a warm evening). As we sat outside, I observed the hostess screening the vax IDs of a group of girls. They flashed them and they were in. No hesitation. I wanted to ask this extraordinary hostess — imbued by the State of New York with a fascinating level of biomedical authority — some crucial questions about her unilateral decision: Which vaccine did the girls receive, and when? If it was Pfizer or J&J in, say, April, how could we know they were still immune? Had they recently received boosters? Could they produce proof of adequate antibodies or recent negative COVID tests, as my group could?

Of course, the hostess — truly a medical marvel, a veritable one-woman bioscience tribunal, according to the laws of New York — didn’t know. And according to the state, it didn’t matter. All that mattered was a vax ID from the girls, created at some point. Bill de Blasio and Kathy Hochul are happy with that. The hostess needn’t know the difference between a virologist and a phrenologist.

In defense of the poor hostess and the restaurant owner and manager, they surely don’t like saying no. They have been ordered under threat of punishment from an irrational and coercive government, and with little recourse to the judicial branch.

I’ve mentioned the ridiculous case of my friend Tom, a COVID survivor. His antibody level is 55 times higher than the minimum threshold level the vaccines aim for, i.e., the level when vax authorities call for boosters. Tom’s physician told him not only the obvious — that he’s totally immune — but that he cannot be vaccinated because it would be dangerous given his extremely high antibody count. Moreover, Tom cannot spread the virus. He has sterilized immunity, as natural immunity people do. And yet, Tom is not allowed entry into a New York restaurant because he doesn’t have a vax ID. In fact, if Joe Biden’s OSHA mandate holds, Tom will be required by his employer to get jabbed against his doctor’s insistence. And with medical waivers rarely recognized, and the Supreme Court refusing to intervene to protect Tom’s religious appeal, his prospects are dim.

Tom’s repressors not only don’t follow the science; they flout it. They are an insult to the scientific process.

All of which brings me to my point here today:

What governments and restaurants and HR departments and everyone ought to be seeking is not whether someone is vaccinated but whether the person has protective antibodies. Far more significant is not some arbitrary demonstration of vaccination at some point by some sort of vaccine, but whether the person has protection, artificial or natural. And in fact, in many places around the world, that’s what they’re checking.

Take the Vatican, for instance. Last week it got some bad press with headlines that declared, “Vatican Issues Vaccine Mandate for All Employees, Visitors.” But a closer read reveals this: “The Vatican has eliminated the possibility of employees presenting a negative coronavirus test to gain access to their place of work, insisting that only proof of vaccination or recovery from the coronavirus disease will be admitted.”

For another revealing case, consider Austria, which is notorious for COVID restrictions. Though indeed very restrictive, the Austrian government permits citizens and travelers alike to show a negative COVID test or proof of vaccination or proof of past infection.

The world understands this, but our government in America shuts its eyes. And why is that?

The CDC, the Biden administration, and Anthony Fauci have adopted a one-size-fits-all public-health objective of 100% mass vaccination. That’s their unshakable bias, enshrined as state policy. They want everyone to take the needle, including children and those with natural immunity. There are no exceptions, even with physician recommendations. The educated, pedigreed people with multiple degrees who populate your government uncreatively adhere to a single-prescription resolution.

Quite outrageously, the federal government has not pursued public-awareness campaigns on what to do therapeutically if you contract COVID — something vitally needed for two years now. Many lives could have been saved if public officials had proactively pushed information on therapeutics at even a fraction of their myopically militant push for vaccination.

The only campaign is vax, vax, vax. They’ve placed all their COVID eggs in one basket. They have a vested interest in funding and promoting vaccines. You can follow the money on that one, as the likes of Robert F. Kennedy Jr. have argued.

Your tax dollars at work. And liberals want greater government control of healthcare.

In turn, the government’s position — given that the government is in the hands of Democrats — is echoed and enforced by the liberal mainstream media and Big Tech, which blithely toe the party line pushed by the Democrats in charge. Those who disagree are chastised as “anti-vax” flat-earthers, censored and slapped with “misinformation” labels on social media.

For a people to not even consider these questions amid an unprecedented mass case of state coercion is deeply troubling. If Americans blithely accept this, then we’re a nation less of the people than the sheeple. Herd immunity is out. Herd mentality is in.

And the craziest thing is that we’re rapidly approaching a point where probably the only assured immunity is natural.

In all, it leaves those with natural immunity literally out on the cold not only in places like New York City but, if Biden’s OSHA mandate isn’t stopped, out in the cold nationwide in January.

Will the Supreme Court step up to protect its citizens? We shall soon see. Given what we’ve seen thus far, I’m not optimistic.