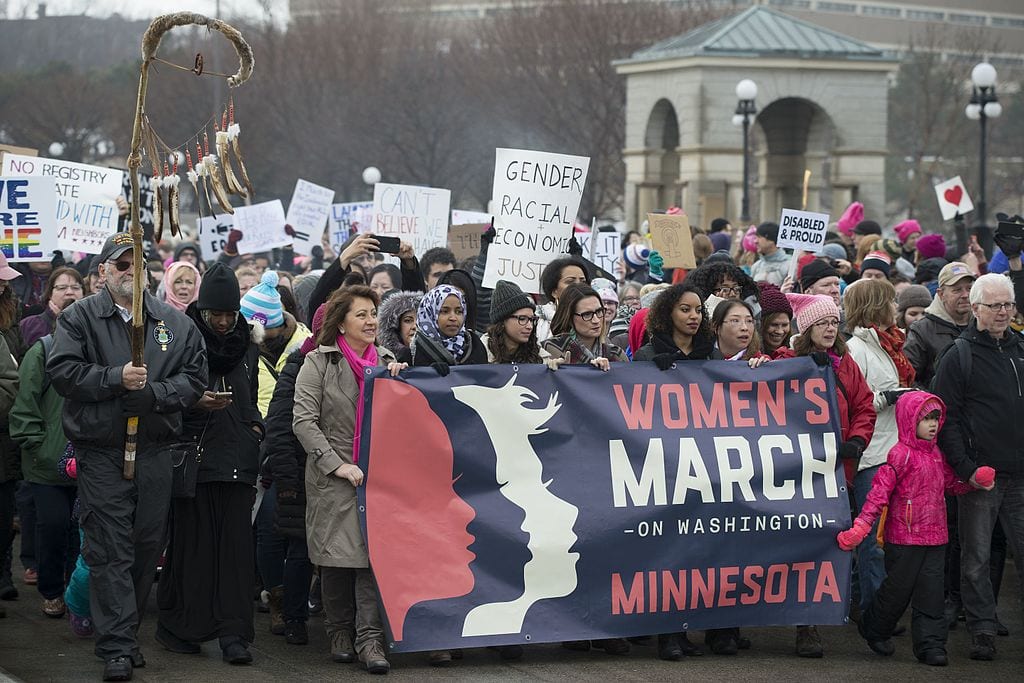 Please stop calling me your woman. We may share biology but we do not share beliefs. Treating me that way by constantly assuming that I and millions of other women are part of the #WomensWave set to “sweep the world forward” this election is both inaccurate and disenfranchising. It’s as if you think you have the right to co-opt my voice because of my uterus. Your tactics also reveal that you are more like a pink mafia trying to silence opposition than a group trying to give individual women a voice.

I did not march with you in January 2017 and I didn’t vote for your gal Hillary. In fact, the only protest I have attended objected to her opportunistic decision to move to New York in 1999 to run for U.S. Senate in 2000. And I can be happy regardless of who controls the White House and Congress! I am not walking around “with a churning knot of terror” in my stomach at the theoretical prospect of Democrats losing this midterm like so many of you. Nor have I started knitting plush female genitalia hats to manage my anger since President Donald Trump’s inauguration.

I am sick of being drafted into your groupthink on race, religion, abortion, speech, and almost every other issue simply because my mother’s OB-GYN declared, “It’s a girl!” when I was born, and because I went to college and have a master’s degree.

Let me tell you why. I’ve watched you and learned.

As a young woman, I watched Hillary Clinton defend the indefensible in her husband Bill as her daughter absorbed her mother’s actions and children around the nation were forced to discuss our then-president’s predatory sexual proclivities. And then I watched the nation’s top feminists fall in line behind Bill because, in the words of Gloria Steinem, “We will disqualify energy and talent the country needs.” Where were their missives declaring a left-wing conspiracy during the Brett Kavanaugh Supreme Court confirmation hearings?

During the 2016 presidential race, I watched your gal Hillary shamelessly tell Americans that, “every survivor of sexual assault deserves to be heard, believed, and supported.” And then earlier this month she said that her husband’s sexual relationship with intern Monica Lewinsky was not an abuse of power! Where were you on her hypocrisy? So far, there has been a deafening omertá.

I’ve watched you talk about how abortion should be “safe, legal, and rare” while simultaneously fighting for the right to have one until the day a child is born. You allegedly believe in science, so didn’t you know babies can survive outside the womb as early as 21 weeks? I’ve watched you try to stop funding for and make it impossible to see a movie about one of your Roe v. Wade handmaidens, Dr. Kermit Gosnell, the baby butcher now serving life in prison. And I’ve watched you tell Americans there is no room in the Democratic party for those who don’t believe in the absolute right to murder unborn children.

I’ve heard you call stay-at-home moms “leeches” and white women “gender traitors” for insisting evidence support sexual assault claims and for voting for someone you don’t like. And I’ve watched as your paper of record hired a woman who wants to #cancelwhitepeople and publicly mused: “Are white people genetically disposed to burn faster in the sun, thus logically being only fit to live underground like groveling goblins?”

As a mother of three children, two of whom are boys, I’ve watched one of yours, Christine Blasey Ford, attempt to destroy a man on the flimsiest shards of uncorroborated memory while the police officers you hate made sure your hired protesters had room to practice free speech. And then I watched mobs, yes, that’s the correct word, of you verbally and physically harass Senators and then scratch at the Supreme Court while Brett Kavanaugh was sworn in with his family at his side, including two young daughters. Even your revered Justice Ruth Bader Ginsburg decried the process and said it should return to gentler times. Do you remember when she was confirmed 96 to 3 in 1993?

So, no thanks. I don’t want to be a part of a movement whose chief aim is power, and whose primary tactics are hypocrisy, incivility, and lies. Oh, and by the way, even with my master’s degree, I can’t understand most of what you say because you speak with an ever-changing vocabulary of race and gender pronouns known only to your fellow travelers. In my experience, talking to yourself doesn’t win over a lot of hearts and minds, not that you care.

I’m done seeking acceptance to vote my conscience from those who don’t think my opinion has a right to exist. Call me what you will, but don’t call me your woman.

Marta H. Mossburg is a visiting fellow at The Maryland Public Policy Institute.