by Ben Stein
A monument in Wielun, Poland, commemorating the bombing of the town by the Luftwaffe in the very early hours of September 1, 1939 (Lidia Muhamadeeva/Shutterstock.com) 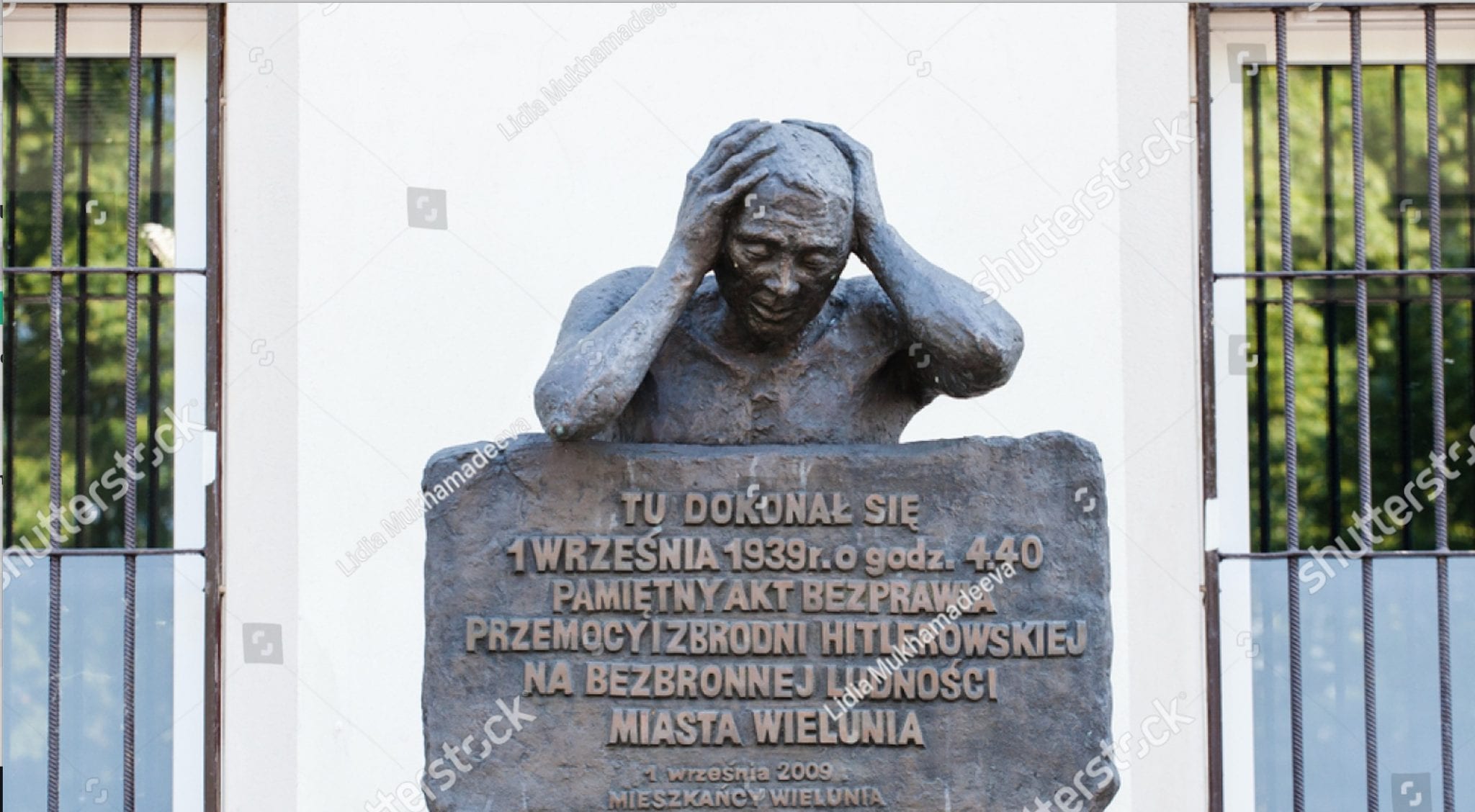 It’s impossible to believe, but time passes so quickly that it’s now 80 years almost to the hour that World War II in Europe began with the Nazi invasion of Poland. I’m 74, so it was not even six years before I was born. How the world has changed since then! The murder of six million of my fellow Jews. The brutal rapine of the heroic Polish people. Der Führer. Mussolini. Tojo. Pearl Harbor. My dear cousins shot by the Germans in Russia. The incredibly hard-fought battles of Peleliu and Vella Lavella in the Pacific. The siege of Leningrad. The Blitz and the greatest man who ever lived, ,Winston S. Churchill. The Royal Air Force. “Never in the history of human conflict was so much owed by so many to so few.” Churchill. The only real crime is to be sick. So said Hitler, and he should have known. Stalingrad. Kiev. The Warsaw Ghetto Uprising. The incredibly brave Warsaw Uprising against the Nazis in 1944, and Stalin’s cruel indifference to the Poles’ fate.

Night after night, wifey and I watch documentaries about World War II. Usually it’s The World at War or else Victory at Sea. These are historically great works of art and scholarship. Watch them if you possibly can.

Now, as I have written many times before, my wifey has been ill for some considerable time now. We don’t know what she has, but it’s something to do with chronic panic attacks and disorientation. I lie with her and hold her hand.

Then, about midnight, she tells me she’s got to go to sleep. She snores like a freight train in the Idaho night so I sleep in my own room and she sleeps with the nurses.

Just before I walk her down a long hall to her room, we hug each other and say a prayer.

“Our Father, who art in heaven, hallowed be thy name, thy kingdom come, thy will be done, on earth as it is in heaven. And give us this day our daily bread and forgive us our trespasses as we forgive those who trespass against us. And lead us not into temptation but deliver us from evil. For thine is the kingdom and the power and the glory forever and ever, Amen.”

This is the prayer we said EVERY SINGLE SCHOOL DAY from kindergarten to 12th grade. It is known as “The Lord’s Prayer” because Lord Jesus Christ told his followers to say it shortly before Golgotha. It didn’t hurt me none.

Then we follow that up with our own prayer for America.

“Dear God, please bless the United States of America and bless Eretz Israel and God bless the United Kingdom and God bless all of those who fought for this great country and its great ideals against the Nazis in World War II and against the Nipponese and against the Communists in Korea and Vietnam, especially my father in law, Col. Denman, Jr., and my uncle, Bob Denman. (Col. Denman was awarded the Silver Star for heroism in World War II and the Bronze Star and Distinguished Service Cross for Vietnam. Bob was offered the Silver Star for hand-to-hand combat against the Communists in Korea but turned it down because he wanted every man in his platoon to get one and the DoD said no.)

“And please bless every man and woman who has ever stood up and fought for decency and freedom for humanity from the Revolution to the Civil War and every man who fought in the alleys of Cologne against the Nazis and in the alleys of South Central against the immigrant murderers. And every woman who endures the evil pain of childbirth to keep the human race going. And their children and our grandparents, and God bless Churchill and Eisenhower and Nixon — the Peacemaker — and FDR and God bless Trump, who is a true hero.”

Then we embrace for a long time and I put Alex under the covers and put her to bed.

Then I lie in bed and then get up and read the Mourner’s Kaddish in Hebrew and English and I still miss my parents like mad and I thank God that I have a glorious sister and the best wife on the planet. Then I take a super-hot shower and get ready for sleep.

I should tell you that I pray for Trump because he believes in America. He wants an America that is true to its founding ideals of liberty and free enterprise. I also pray for him because he’s been the victim of the most consistent, slimiest hate campaign since Abraham Lincoln. He hasn’t done anything seriously wrong, and yet the media powers treat him as if he were John Wilkes Booth. I don’t like his tariff fights with China, but what can we do? They’ve been robbing us blind in terms of technology for decades now. For the Chinese, a brilliant and proud people and at least the equal of any people on this earth, there is no stopping point between now and them ruling the earth.

That’s what Trump’s struggle is about: to stop the world from becoming a vast Chinese empire. I don’t blame the Chinese for their ambitions. They were treated very badly all over the world for generations. But now, like a spring that has been compressed for too long, they are springing back madly.

They have their own problems: they are doing deficit spending on a titanic scale and it cannot last. They have restive minorities like the Uighurs and others. They will eventually spend themselves into big trouble. But in the meantime, they cause trouble in their very large orbit. Trump understands this and wants to stop them and get them to work cooperatively with us and the rest of the big countries. Would Kamala Harris get it? Would Bernie? Would Cory?

Trump is the only one who understands how fragile our system is and wants to save it. He’s not angry at America. He loves America.

So for this and for many other reasons, I pray for him. I am an economist — student of the allocation of scarce goods — and the scarcest commodity on earth is human dignity. I think Trump gets it. The Chinese who are busy suffocating the earth don’t get it. I pray for them to understand that if they kill the earth, that includes them. If Trump can slow them down, he’s the ultimate environmentalist. More on Trump and Law and Economics to come.