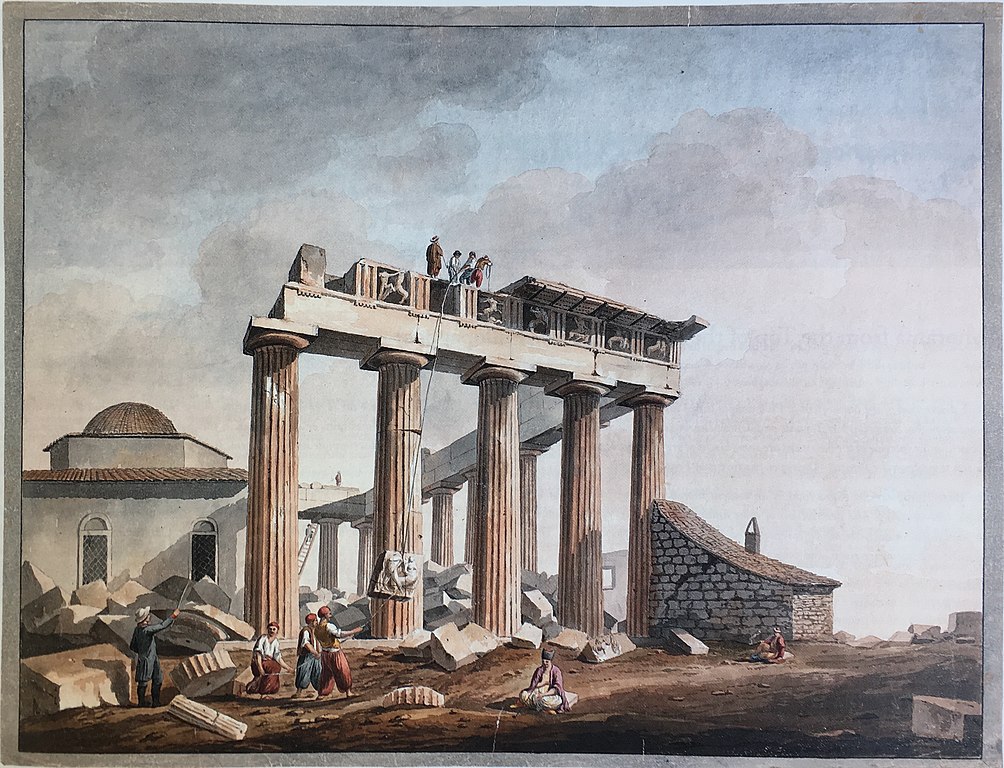 One of the advantages of being an oldster who still subscribes to a newspaper — four of them, actually! — is having the opportunity to scan obituaries. It’s a bit morbid. On the sad side, I’ve discovered long-ago friends among the lost. On the positive, I learn about little-known heroes, inventors, and scoundrels, fascinating tidbits to enliven days otherwise spent contemplating political follies in Washington and human carnage abroad.

The latest was of archaeologist Oscar White Muscarella. According to the Washington Post, he engaged in “a four-decade quest to prove that many antiquities held by the Met and other museums were stolen or fake.” In his view, “[t]he only artifacts that museums should hold and display … were those collected and properly documented by archaeologists.”

Those concerned about the world’s historic patrimony should be eternally grateful that Chiang Kai-shek’s regime absconded with as much as it did.

There’s no doubt that “plunder,” as Muscarella termed it, has helped fill great museums far and wide. Much of this occurred when individuals and institutions in wealthy, especially European, nations took advantage of their surplus of money, technology, power, and colonies to grab everything they could, or to purchase items from private operators who used stealth, deceit, cash, and ingenuity to helpfully, and profitably, acquire the patrimony of other nations.

As international mores shifted, the dispossessed increasingly began pressing for the return of “their” objects. Perhaps most famous are the Elgin Marbles. At the beginning of the 19th century, Thomas Bruce, known as Lord Elgin, acquired large sections of the frieze from the Parthenon in Athens after serving as the British ambassador to the Ottoman Empire, which may have approved the removal. He subsequently sold his ill-gotten gain, which was shipwrecked and then recovered at great cost in transit, to the British Museum. (Alas, the old gods must have been very angry, as he suffered a significant financial loss from the escapade.) The Greek government long has demanded the frieze’s return, and pundits continue to battle it out as British Museum officials apparently talk with counterparts in Greece about a possible compromise surrender.

There are plenty of other cases. Far more violent and dubious was the seizure of the Benin Bronzes after an 1897 punitive expedition by London against the Kingdom of Benin. And that is just one instance from multiple European countries overspreading Africa and capturing territories and peoples. The People’s Republic of China also has been pressing for the return of artifacts taken as the Chinese empire was declining. In some cases, the PRC sought to convince auction houses to withdraw disputed objects. Mostly, however, Chinese money has resolved the problem by purchasing objects on sale.

Although old-style colonialism ended long ago, Nazi Germany — and its officials, most ostentatiously Hermann Goering — engaged in much the same activity as it forcibly overspread Europe. Much effort has been expended to return plundered property to its rightful owners, or to their heirs. Decades later, new stashes of looted art continue to turn up, but obstacles to its return have been many. Many works, some highly celebrated, remain missing.

Whoever would imagine that such a beautiful passion as art could be so ugly? Indeed, Muscarella ultimately blamed collectors. He denounced “the self-serving and partisan collecting culture.” He proclaimed himself “against all buying of ancient art from dealers,” for, “[i]f the objects are genuine, we’re buying plundered art.”

I have the collecting bug, though my tastes are more mundane, and certainly a lot less expensive. Some passionate collectors obviously will stop at almost nothing to acquire a fine new object. Yet not all collecting is “plunder,” and not all plunder is the same. Moreover, the collecting gene is widely distributed and deeply embedded. Better to adapt to than attempt to eradicate it.

The easy cases involve overt theft of owned objects from people who can be identified. Hence the priority of returning Nazi war booty. Seizing art at the point of a gun, and forcing cheap sales by threatening confiscation, are crimes under any circumstances, and restitution is the only proper remedy if possible.

Yet, in many cases, the owners are unknown and, even if alive, are in no position to be compensated. Consider the Soviet Union, in which the new rulers sold off the Romanov dynasty’s possessions, most notably the Fabergé eggs, as well as religious and other objects taken from victims of the new communist order. (Ironically, most of the eggs have since returned to Russia, purchased in 2004 by a modern business “oligarch.”) Selling confiscated booty is a criminal act, but the tsar and his family were executed, and any surviving aristocrats in Russia were dispossessed.

Moreover, one could argue that the royals’ ownership itself of such objects was illegitimate and that they properly belonged to the Russian people, of which the new Soviet government became the representative, however imperfect. After all, imperial Russia was no democratic republic and didn’t even pretend to put its people first. If you were an impoverished farmer anywhere across that vast land, you probably preferred your government to have more money, theoretically available for your betterment, than a stash of royal toys.

The older the objects, the more dubious the claim of modern governments. Who actually owned the Parthenon in 1801, when the Elgin saga began? The nation of Greece didn’t exist when the Parthenon was built. Greece was not an independent state when Elgin made off with the infamous marbles. The current authorities in Athens do not have an obvious, let alone moral, claim to history’s relics.

In any case, absent sales to foreigners, many such objects would have been destroyed. For instance, the Bolsheviks overthrew the monarchy and despised the church. They slaughtered and wrecked with wild abandon. In the main they were connoisseurs of terror, not art. Only the prospect of capitalist profit gave the new regime an incentive to preserve such objects. Years ago, I purchased a Russian icon that, I was told, had been acquired from a Soviet official. Presumably, that meant the item had been seized from a person or church. If the story was true — certainly plausible, but impossible to confirm — it didn’t matter a century later. Absent the opportunity for a sale, how likely is it that my icon, a symbol of the hated Orthodox Church, would have been preserved by the USSR?

Perhaps most extraordinary was Mad Mao Zedong’s unleashing of frenzied Red Guards during the Great Proletarian Cultural Revolution, who targeted objects as well as people. Mao’s ideological foot soldiers destroyed much of China’s historical heritage that was within reach. Had Chiang Kai-shek not packed up and taken the contents of Beijing’s Palace Museum, which are now housed in Taipei’s National Palace Museum, they likely would not have survived. Those concerned about the world’s historic patrimony should be eternally grateful that Chiang’s regime absconded with as much as it did.

Indeed, even in Mao’s China, foreign demand helped save older objects avoid destruction by Mad Mao’s agents. In 1971, reported the New York Times: “Collections of traditional Chinese art objects of second‐class quality — porcelains, jades, paintings, lacquerware and jewelry—are for sale in special shops in Peking, Tientsin, Shanghai and Canton, but only for foreign visitors. The Chinese never get a sight of these examples of a great artistic past.”

Ultimately, many of the objects obtained by the well-heeled collectors denounced by Muscarella end up in public museums. Such is the case of the famed Fabergé eggs. After a long detour in Malcolm Forbes’ collection — he also accumulated toys, military art, autographs, and more, much of which was on public display at the magazine’s longtime headquarters on Fifth Avenue in New York City, since moved — most ended up in Moscow’s Kremlin Armory Museum and St. Petersburg’s Fabergé Museum. Others are in Western museums.

In other countries, such ancient artifacts might not have survived, or even been discovered, had there been no Westerners willing to pay for them. Succeeding generations had little appreciation for their immediate past. Throughout the ages, people reused old materials, tearing down structures we now revere to construct buildings long disappeared. Grave robbers loot what once were considered to be sacred objects, ready to destroy objects for their base value if no better offer emerges. (READ MORE from Doug Bandow: The Murderous Soviet Union Was Born a Century Ago)

Moreover, sadly, domestic strife and foreign invasion alike have been culture destroyers in many nations. Ancient empires slaughtered populations, as well as militaries, wrecking everything within reach. Consider the outcome of the Third Punic War and Rome’s elimination of its ancient rival, Carthage. More modern examples abound: the allied immolation of Dresden’s cathedral, since rebuilt, in World War II. Many historic landmarks required some luck to survive — for instance, 19th-century Greece was hardly the most peaceful, stable environment for the discovery and preservation of the past.

Muscarella deserves credit, exposing dubious acquisitions of both looted and fake artifacts even at his own institution. However, to imagine that many of today’s great museum exhibits would or even could exist without private action — by adventurers and plunderers, as well as collectors, curators, and dealers — is likely a fantasy. He should have treated us collectors, admittedly a pitiful band utterly helpless while in thrall to our addiction, with greater respect. Absent our frenetic desire to acquire ever more of even the most fantastic and peculiar objects, more of history’s greatest relics would have disappeared in the mists of time.

Doug Bandow is a Senior Fellow at the Cato Institute. A former special assistant to President Ronald Reagan, he is author of Foreign Follies: America’s New Global Empire.